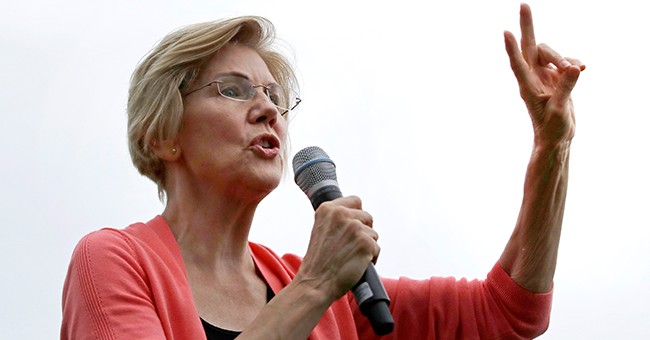 It's always fun watching journalists who rooted for Barack Obama for eight years, and who are now rooting for Elizabeth Warren, concern trolling about deficits and the national debt.  It's the mirror effect of erstwhile Tea Partiers having nothing to say as both arrows are pointed inexorably northward under another Republican president.  To be clear, the deficit is ballooning in a truly alarming way, given that the economy is in good shape and we're at relative peace:

Full story: US deficit hits $984 billion, highest since 2012 and marking a nearly 50% increase under President Trump.

Reminder: It is unprecedented in good economic times to have the deficit rising this fast (and high).https://t.co/Ky0ePdwW0f #economy #budget #debt

But contra the center-left conventional wisdom (which was perfectly fine with runaway deficits and astonishing debt accrual back when Barack was running the show), the 2017 tax cuts and reform law is not responsible for the expanding sea red ink, as the graphic above implies.  Government revenues are up.  Put bluntly and accurately, Washington has a spending problem.  That's what the math shows, period.  Warren's newsroom cheerleaders feign concern about 'unpaid-for' tax cuts, which allow families and businesses to keep more of the money they earn, yet they're endlessly delighted by the Massachusetts Senator's supposed wonky "plans" -- nearly all of which amount to more spending, more taxing, and more government control.  And she's racking up a "staggering" tab:

This won't be a problem, will it?
https://t.co/EvoSsCVAwR via @YahooFinance

Altogether, the Massachusetts senator’s agenda would require $4.2 trillion per year in new federal spending, and a like amount in new taxes, if she paid for everything without issuing new debt. The federal government currently spends about $4.4 trillion per year, so Warren’s plans would nearly double federal spending. The Treasury takes in about $3.4 trillion in tax revenue each year, so if Warren levied new taxes to pay for everything, federal taxation would rise by 124%. She could pay for some of her plans by issuing new debt instead of raising taxes, but with annual deficits close to $1 trillion already, that might be unwise. The biggest chunk of new spending in Warren’s agenda, by far, would be Medicare for all, the single-payer health plan she would impose to replace all private insurance. Warren explains how she would pay for all of her plans—except this one.

Bear in mind a few facts here: (1) The federal government spent roughly $4.1 trillion in 2018, so Warren's new plans would entail doubling the entire federal budget, which is already running reckless and unsustainable deficits, as mentioned above.  To break even, Warren would need to more than double (+124%) all tax revenue.  Isn't it adorable that she won't answer whether this will impact the middle class?  Of course it would.  (2) She claims she's working on an explanation for how she'd finance her giant healthcare scheme, sending her team of left-wing economists 'rushing' to produce something.  Here's the truth:

1) It is remarkable that it took 25 years for the M4A movement to realize it needs a plan to finance the $30T cost.

2) *IF* Warren offers a legit, specific, gimmick-free, fully-funded plan -a big if - it will be a step forward to show Americans the cost.https://t.co/muEzq4EAVX

More like $34 trillion in its first decade, but who's counting?  A specific roadmap to these tax increases looks like this.  Good luck proposing that, Liz.  (3) A separate, detailed "pay for" that she's laid out, to cover the bill for other elements of her jaw-dropping agenda has been tried, and has largely failed badly, in Europe.  It has chased away wealth and capital, it has failed to generate anywhere close to its projected revenues, and it has been repealed in the large majority of places it was attempted.  But we're supposed to be believe it will magically work in the US.  Speaking of magical thinking, I'll leave you with former Obama chief of staff and Chicago Mayor Rahm Emanuel dismissing Warren's single-payer scheme as a "pipe dream:"

Someone needs to say it: Medicare-for-all is a pipe dream, @RahmEmanuel writes https://t.co/Jv6vfUEExO