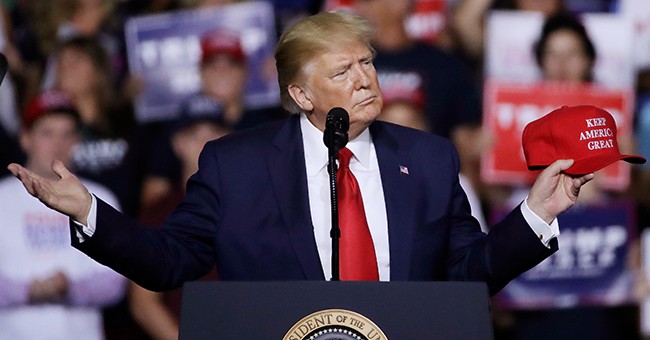 Amid several news cycles dominated by a deeply stupid hurricane dispute, a controversy over the Taliban and presidential optics, "impeachment," and the non-amicable departure of the National Security Adviser, some decidedly positive economic news has gotten lost -- or at least muted -- in the shuffle.  For instance, one of the Democratic attack lines on GOP economic policies, no matter how successful they may be, is that they exclusively benefit "the rich."  This Washington Post story underscores why that simply has not been the case during the current expansion:

More evidence that the U.S. economic boom under @RealDonaldTrump is reaching everyone:

"Women are predominantly driving this trend, which is so powerful that even many women who weren’t thinking about working...are being lured into employment." https://t.co/WE66LrGlZO

Not just women generally, but black and Hispanic women, who are no longer "sidelined" and "jumping into the workforce." The most recent monthly jobs report -- which was a mixed bag over -- showed record low unemployment among black Americans, with unemployment among Latinos matching a previous low:

Furthermore, politicians often lament the contracting or "hollowing out" of America's middle class, but new official data shows that the shrinking of the US middle class can largely be attributed to households "graduating," if you will, into the upper-middle class and beyond:

Maybe the most important finding from today's Census Bureau report on Income. Yes, the middle class is disappearing but it's because they're moving up to higher income groups. The share of US households making $100K (2018 $$) has more than tripled since 1967, from 9% to 30.4%. pic.twitter.com/1ZS9IzNmzo

As you can see above, in addition to the tripling of the 'high-income' category (in inflation-adjusted dollars), the 'low-income' group has fallen by nearly ten percentage points since the late 1960's.  Obviously, neither political party can claim full responsibility for these positive trends, but the Trump administration can certainly crow about the notable increase of high-income households, and a corresponding decrease in low-income households, over the last few years.  The New York Times reports that the Trump-era economic recovery is "at last delivering income gains to middle-class and low-income families."  Here's an Associated Press bulletin based on the same census data: "US household income finally matches 1999 peak, while poverty rate hits lowest point since 2001."  And CNBC:

The labor market and the broader economy are both better than they look on the surface, and in fact have been mostly defying the continual patter of recession expectations. By multiple measures, the U.S. is staying ahead of the global slowdown, the trade war with China and the bond market’s implication that the decade-long recovery after the financial crisis is coming to a close. Though the major Wall Street averages wobbled around breakeven Tuesday, stocks are back near record highs as investors shrug off the wave of fear...More signs of a strong labor market came out Tuesday. The Job Openings and Labor Turnover Survey for July — the reading runs a month behind nonfarm payrolls — showed there are still 1.17 million more job openings than available workers...Finally, Tuesday’s National Federation of Independent Business Survey, which polls small businesses, found that 57% of all respondents reported that finding qualified workers remains their biggest staffing challenge. “Just about every labor market indicator that’s come out before and after the weak payroll number on Friday suggests the labor market is doing great,” Yardeni said. “There’s no recession.”

With the backdrop of this ongoing positive news, I'll leave you with the latest iteration of a point I've been making for awhile regarding the president too often acting as his own worst enemy:

Most presidential elections are a referendum on “are you better off than you were 4 yrs ago”. In 2020, Ds best argument : ‘do you want another 4 years of this chaos and behavior and drama?’ https://t.co/EkfnD7TMIN