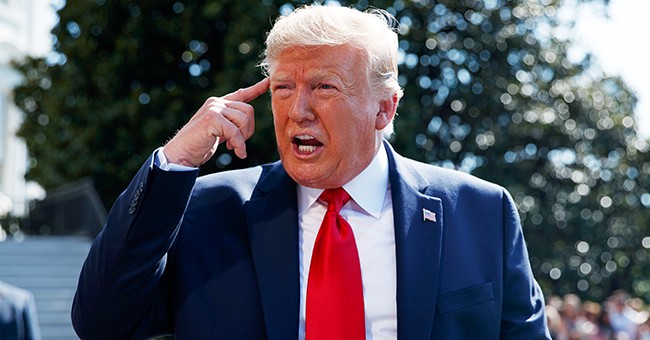 Sometimes, he just can't help himself.  Literally.  Realistic President Trump's supporters -- many of whom may be eyeing his mediocre-at-best approval ratings and strikingly tepid re-elect numbers -- understand two things: First, the economy (yes, still) and the policy extremism, cultural radicalism, and off-putting overreach of his opponents are the president's strongest assets heading into next year.  Second, all too often, the president's largest stumbling block is himself.  Granted, his true believers will love and exuberantly defend basically anything he does.  This is hardly an exaggeration.  Also granted, many right-leaning and independent voters who don't care for his comportment and habitual excesses will hold their nose and back him next fall, especially in the event that the Democrats nominate a hardened leftist.  But as we learned in the midterms, these two groups combined are not large enough to guarantee Trump four more years in office.  He needs to motivate his core base and bring a significant number of skeptics on side.

Self-inflicted wounds undermine his ability to broaden and build the coalition he needs.  Public polling suggests that many Americans yearn for a return to relative normalcy, and do not view Trump as embodying stable, presidential characteristics.  The 2016 election was a 'change' cycle, so 'normal' and 'stable' were not necessarily near the top of many voters' priority lists.  But the incumbent doesn't want 2020 to become another change election, for obvious reasons.  He needs to convince people that things are going well, and that handing the keys to the car over to the opposition party would be a needless risk.  There's a strong case to be made on those points, but it frequently gets overshadowed by Trump insisting on totally undisciplined forays into exhausting, petty feuds.  For example, this one, in which he can't resist elevating a former ally-turned-critic, lobbing insults at a man he personally hired to run his entire White House communications operation:

....got fired. Wrote a very nice book about me just recently. Now the book is a lie? Said his wife was driving him crazy, “something big” was happening with her. Getting divorced. He was a mental wreck. We didn’t want him around. Now Fake News puts him on like he was my buddy!

Trump and much of the MAGA crowd live for this kind of drama.  It's his lifeblood.  Many, many persuadable voters do not.  There's a reason a third-tier presidential candidate garnered attention and acclaim for his recent promise that if elected, average people won't need to think about him for "two weeks at a time."  A refreshing thought.  Then there's the president's mind-bending decision to take a fun little online meme (this self-aware wink was genuinely fun and inspired), based on a non-crazy idea, and escalate it into a pointless and stupid international incident:

Denmark is a very special country with incredible people, but based on Prime Minister Mette Frederiksen’s comments, that she would have no interest in discussing the purchase of Greenland, I will be postponing our meeting scheduled in two weeks for another time....

In Copenhagen, Danish PM Mette Frederiksen says she received word of @POTUS cancelling visit "with regret and surprise." Says she was looking forward to it and preparations were well underway. She stands against sale of Greenland to US but says it does not change ties to US. pic.twitter.com/fSwqhERxYj

Overnight reaction from Danish leaders:
“An insult”
“Lacks even basic diplomatic skills”
“Please show more respect”
“An insult to the royal house”
“A spoiled child”
“Trump lives on another planet”
“Quite absurd”https://t.co/gpX3evb5qD

Do I believe this episode is devastating?  No.  I don't even think almost anyone will remember it in a few weeks, as we'll have moved on to new partisan circus acts and kerfuffles.  But I do believe there's a cumulative , slow-building 'drip, drip, drip' effect to these stories.  Political death by a thousand tweets, if you will.  No single flare-up is sufficient to fatally wound the president's prospects for re-election, but the endless noise builds and builds until it gets on enough (non-"resistance") voters' nerves that they just don't want to hear it anymore.  Which brings us to this:

....like he’s the King of Israel. They love him like he is the second coming of God...But American Jews don’t know him or like him. They don’t even know what they’re doing or saying anymore. It makes no sense! But that’s OK, if he keeps doing what he’s doing, he’s good for.....

"...all Jews, Blacks, Gays, everyone. And importantly, he’s good for everyone in America who wants a job,” the quote concludes.  What is this absolutely bonkers ("second coming of God"?) quote referring to?  And why is Trump sharing it?  Because of this mess, in which the president mindlessly inserted himself into the latest anti-Semitism controversy involving Ilhan Omar and Rashida Tlaib, busting through the wall like the Kool Aid guy.  He demonstrated that in spite of railing against these Squad members for their bigotry -- and they richly deserve lots of harsh criticism -- he doesn't understand that putting his own spin on 'dual loyalty' tropes is a very bad idea.  Various allies are now spinning his comment, explaining what he "really meant" in discussing American Jews' disloyalty, but he's once again tossed a self-defeating lifeline to Omar, Tlaib and their defenders by interrupting their worsening scandal and muddying the waters with his own ignorant bloviations.  For smart takes on the meaning and context of the president's latest outburst, read this and this. And yes, liberal hypocrisy abounds.  But to me, the simple truth about his thought process and motivation can be boiled down, appropriately, to a tweet:

He doesn’t think any of this through & doesn’t know basic stuff. The mop-up spin will be just that. The calculation is as follows: Does X (or saying X) aggrandize or benefit him (in his own mind) at that exact moment? If ‘yes,’ he says/tweets it. Not complicated. And not good. https://t.co/QGPbtysjBT

In short, I'm not "freaking out" about any of this, nor am I in the grips of anti-Trump derangement.  I'm also not proclaiming that the president is doomed next year, in spite of some of the red flags in the data.  He could definitely win.  I'm simply saying that vis-a-vis the 'drip, drip, drip' phenomenon I mentioned earlier, we've witnessed a mini downpour in recent days.  One need not be personally offended by any of it to at least consider how it's wearing on, and grinding down, others.  Meanwhile, as his wife clumsily plays the 'electability' card (which is compelling until it isn't), I'll leave you with whatever this bizarre, rambling nonsense is from Joe Biden.  Yikes.  I wonder if Team Trump might start rooting for this man to be their opponent:

“None of you women would know this” appears to be a joke about age or that the women are too virtuous, but my god does Biden look terrible. This is sad. https://t.co/V58vD4zqDF