Democratic Senators Threaten SCOTUS: Do As We Say, Or Else... 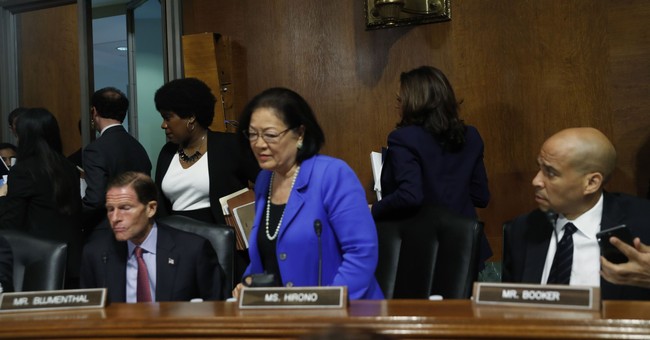 Beth  touched on this yesterday, but I think the extraordinary nature of what's happening here needs to be highlighted repeatedly.  In an effort to bully the Supreme Court, a group of Senate Democrats are warning that if the conservative justices refuse to "heal" the court -- in this case, "healing" constitutes declining to take up a specific gun rights case -- the Court will face a "restructuring."  This is nothing less than a threat against the independent judiciary by hardcore partisans:

Several high-profile Senate Democrats warned the Supreme Court in pointed terms this week that it could face a fundamental restructuring if justices do not take steps to "heal" the court in the near future. The ominous and unusual warning was delivered as part of a brief filed Monday in a case related to a New York City gun law. Sens. Sheldon Whitehouse, D-R.I., Richard Blumenthal, D-Conn., Mazie Hirono, D-Hawaii, Richard Durbin, D-Ill., and Kirsten Gillibrand, D-N.Y., referenced rulings by the court's conservative majority in claiming it is suffering from some sort of affliction which must be remedied. "The Supreme Court is not well. And the people know it," the brief said. "Perhaps the Court can heal itself before the public demands it be 'restructured in order to reduce the influence of politics.'"

The short-term goal here is to prevent SCOTUS from even taking up a Second Amendment-related matter:

The Democratic senators' brief was filed in the case of New York State Rifle & Pistol Association, Inc. v. City of New York, which dealt with legal limitations on where gun owners could transport their licensed, locked, and unloaded firearms. They are urging the court to stay out of the case brought by the NRA-backed group, claiming that because the city recently changed the law to ease restrictions, the push to the Supreme Court is part of an "industrial-strength influence campaign" to get the conservative majority to rule in favor of gun owners. If the court still decides to hear the case, a ruling against New York City could prevent other cities and states from passing similar gun control laws.

As I've written previously, the Left and its allies in the mainstream media have spent the Trump years issuing dire warnings about our norms and institutions -- yet they have routinely demonstrated their own willingness to damage or destroy precisely those same norms and institutions in furtherance of their agenda. So many of their frantic warnings about threats to the very fabric of our republic appear to have been made in bad faith.  In this case, a cabal of leftist Senate Democrats are telling members of the judicial branch that if they fail to produce the "correct" ideological outcomes, politicians will intervene to fundamentally alter the high court's composition.  Needless to say, if Senate Republicans were leveling these threats, with numerous GOP presidential candidates echoing the sentiment with radical proposals, the resulting press coverage would be loud, hostile, and dire.  Instead, this development has largely been met with perfunctory mentions and shrugs.  Also needless to say, even if SCOTUS takes Democrats' preferred path on this question, that result will be instantly forgotten, and the gang of threat-makers will soon be back for more.

What I find particularly remarkable about these Democrats' statement is the hubris involved.  Setting aside the question of whether the Senate could "restructure" the judicial branch, please remember that the members who signed on to the missive are in the minority party right now.  It takes some gall to telegraph new abusive power grabs when you're not even in charge -- and while you're getting burned over and over again by your previous foolish power grabs.  And the short-sighted architect of the most consequential overreach in recent Senate history is urging his party (which, again, is not the majority party) to expand that overreach at the first opportunity:

NEW -- Harry Reid wants Dems to prioritize climate change over health care should they win power in 2020. And he believes they should scrap the filibuster to get it done https://t.co/kVaalozfOf

You'd better believe Cocaine Mitch is paying close attention to all of this, as he proceeds with an aggressive agenda of stuffing the Reid Rule in Democrats' faces literally as often as he possibly can:

Donald Trump has appointed 43 U.S. appeals court judges in 2½ years—about a quarter of the entire appellate bench, which has the last word on most federal cases.

President Donald Trump and Senate Majority Leader Mitch McConnell are reshaping federal courts at a blazing pace, with the Senate’s confirmation of 59 judges so far this year offering a bright spot for the GOP leader who has been criticized for holding up action on just about everything else. The Senate confirmed 13 district court judges two weeks ago before leaving for Congress’s annual August recess. That brought the number appointed so far in Trump’s presidency to 99, in addition to a record 43 appellate court judges and the confirmation of conservative Supreme Court Justices Neil Gorsuch and Brett Kavanaugh.

Imagine getting routed so thoroughly after your last spasm of overreach, yet openly plotting new forms of overreach, even as the party that's actively routing you is still in charge.  This speaks to the arrogance and radicalism of the Democratic Party, which has placed several of its most unserious Senators on the upper chamber's judiciary committee.  I'll leave you with some still-resonant words from Sen. Lindsey Graham, as well as some pointed advice from the Left's favorite SCOTUS justice: