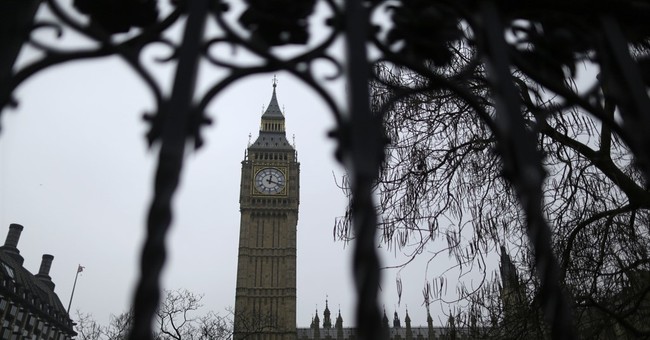 UPDATE - A three-judge panel has overruled this appalling decision. It's small victory, but a victory nonetheless.

ORIGINAL POST - A horrifying case out of the United Kingdom, where the State controls citizens' healthcare decisions, and consequently, their lives.  Many people watched with disgust as that government actively barred parents from seeking experimental and long-shot overseas medical treatments for their severely ill children, even though the disputed care wouldn't have cost taxpayers any money.  These supposedly "free" people were literally prevented from leaving the country to pursue independent options for their own children.  The power of the State, and the force of its ultimate monopoly on healthcare-related decisions, was deemed to be the paramount consideration.  Now we have a British court ruling that government doctors must abort the unborn child of a developmentally-challenged woman in her 20s, even though the mother, her family, and even the mother's social worker all oppose the abortion (via the Catholic News Agency):

A British judge has authorized doctors to perform an abortion on a pregnant Catholic woman with developmental disabilities and a mood disorder, despite the objections of the woman’s mother and the woman herself. The woman is 22 weeks pregnant.  “I have to operate in [her] best interests, not on society's views of termination,” [the judge] explained, arguing that her decision is in the best interest of the woman. The Court of Protection handles cases involving individuals judged to lack the mental capacity to make decisions for themselves. The woman, who cannot been publicly identified, has been described as “in her twenties,” and is under the care of an NHS trust, part of the UK’s National Health Service.

Doctors at the trust wished to abort her pregnancy and argued that, due to her diminished mental capacity, the abortion would be less traumatic for the woman than giving birth, especially if the baby would then be placed in foster care. The woman’s mother made clear to doctors and the court that she would assume care of her grandchild. The woman is believed to have the mental capacity of a grade school-age child. She is reportedly Catholic, and her mother is Nigerian. It is unknown if the pregnancy was conceived consensually, and police are investigating the circumstances of conception. The woman’s mother, reported to be a former midwife, registered her absolute opposition to the abortion citing the Catholic faith of herself and her daughter. A social worker who cares for the woman also disagreed that she should be forced to have an abortion.

The judge rule that this woman of color -- and her family, and her social worker -- do not truly understand what is in her "best interests:" Namely, the forced death of her 22-week-old fetus.  To call this frightening and Orwellian is an understatement.  For reference, babies have survived outside the womb even earlier than this point in pregnancy; this is a viable child.  From the story: "NHS statistics show babies born at 24 weeks have a 50 percent chance of survival on average, though the rate depends on the NHS trust providing care. Babies born in a University College London Hospitals NHS Foundation Trust hospital in London at 23 weeks of gestation have a 70 percent chance of survival." To be clear, this abortion would not be medically necessary.  The mother's physical health is not at risk.  The mother's family have deep religious and moral convictions against abortion, and have vowed to care for the child after his or her birth, yet this "choice" is being forced upon them by agents of the state.  The judge and these NHS doctors believe the child's death is the best outcome for the mother's emotional health. CNA reports that this jurist compiled a long record of abortion advocacy as an attorney:

As a lawyer, Lieven has appeared in court before in cases concerning abortion. In 2011, while representing the British Pregnancy Advisory Service, an abortion provider, she argued that British women should be permitted to medically abort their pregnancies at their own homes instead of in a hospital. Five years later, Lieven argued in court that Northern Ireland’s abortion laws were a violation of the United Kingdom’s Human Rights Act. In 2017, she said that Northern Ireland’s abortion laws were akin to torture and were discriminatory.

How might America's champions of "choice" feel about this compulsory abortion for the 'greater good,' as determined by government functionaries?  The abortion lobby and many within the Democratic Party already argue that abortion must be permitted at all stages of pregnancy, without any limits, for any reason, paid for by taxpayers -- including for illegal immigrants.  If abortion is merely routine "healthcare," as opposed to the taking of an human life, why shouldn't concerns beyond women's decisions be in play?  Pro-abortion forces already argue, often implicitly, that the 'wantedness' of a human being determines her humanity, although radical new state-level laws have also undermined existing legal protections for fetuses killed in acts of violence other abortion.  In other words, criminal penalties for killing a wanted unborn child by assaulting her mother have been reduced in the name of upholding the abortion fanatics' overriding principle that unborn human beings have no rights.  It's the definition of dehumanization.  If abortion carries no moral or ethical weight, are there circumstances under which the government can decided that both a child's right to live and a mother's right to choose can be subordinated?  That's what's happening across the pond at the moment.  I'll leave you with abortion zealots objecting to the treatment of illegal immigrant children in US government custody:

THOUSANDS of children are facing abuse & neglect — imprisoned in federal custody — *without* their families. And yet all we’ve heard from the so-called “pro-life” community is ... ??.

It is peak pro-life hypocrisy. https://t.co/MYRWt4ouGw

Virtually all pro-lifers support additional federal funding to help mitigate the humanitarian crisis arising from overwhelmed facilities at the southern border, and many favor changing immigration laws to discourage additional illegal immigration.  It's quite something to see an organization that is literally dedicated to ending children's lives level this particular charge of alleged hypocrisy against those who don't share NARAL's preferred "solution" for problematic children.  One wonder if Judge Lieven might be flown to the US in the coming months to receive awards for her commitment to so-called 'reproductive justice,' or whatever euphemism abortion extremists are employing these days.  And yes, irony is another fatality of the abortion movement:

By the way, science bolsters the pro-life argument: