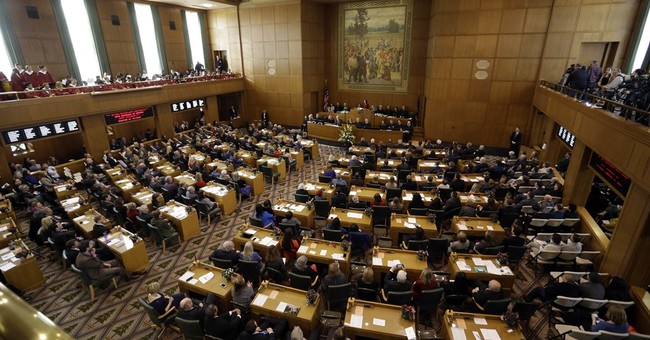 The Democratic Governor of Oregon, a former abortion lobbyist, is preparing to enthusiastically sign a bill into law ("yes! yes! yes!" she ghoulishly tweeted) that would enshrine the most radically pro-abortion regime of any state in the US.  Most people who consider themselves pro-choice on abortion are not radically pro-abortion, but some of the deep-pocketed special interests that bankroll the Democratic Party have earned that loaded moniker.  Here are some details on  the new law, via LifeSiteNews:

The Oregon state legislature has passed a tax bill to make abortion free for all. Tax-funded abortions for both residents and non-residents throughout the state is the goal of House Bill 3391-B, which now goes to Democratic Gov. Kate Brown’s desk...The law would force health insurers to cover abortions without any co-pay and give more than $10 million for abortions and other “reproductive services” to Medicaid. Pro-lifers predict that most of the $10 million will go to Planned Parenthood. Oregon has the most permissive abortion laws in the nation, with no informed consent for women, no waiting for the major surgery of abortion, no parental consent or even parental notification for minors, no ambulance-ready requirements, and no basic safeguards required for all other surgical centers.

Insurance companies in Oregon would be required to cover abortions and other reproductive services at no cost to the patient regardless of income, citizenship status or gender identity under a measure approved Wednesday by lawmakers. Oregon already has some of the most liberal abortion laws in the U.S., leaving out otherwise common requirements for waiting periods or spending limits on taxpayer funds...In some states such as New York, abortions are cost-free if they're deemed medically necessary. The Oregon bill is unique, however, in that patients would have access to the procedure for virtually any reason, at any time, including sex-selective and late-term abortions.

If you are an illegal immigrant whose fetus is in her third trimester of development, and you decide that you'd prefer a boy instead, your totally elective, sex-selective, late-term abortion is not only legal under this law -- taxpayers will pay for it, or your insurance plan must cover it with no copay.  It's difficult to imagine anything more extreme, aside from compulsory abortions.  It's horrifying.  Every single Oregon Senate Democrat voted in favor of this monstrosity, with every Republican opposed.  The House vote was also almost exclusively along party lines.  Governor Brown giddily vowed to sign the legislation, calling opposition to tax-funded late-term abortion "an attack on all Oregonians."  Orwellian.  In addition to highlighting this episode as a breathtaking affront to human rights, I've highlighted this political development for two other reasons.  First, to underscore the abject radicalism of the Democratic Party's abortion stance.  Oregon's government is dominated by Democrats, so they were able to implement a bill that broadly reflects the party's platform, and delights the party's abortion zealot bankrollers.  Democrats frequently assail Republicans as "extremists" on this issue, yet it's their party that's truly extreme, opposing virtually all restrictions on legalized abortion-on-demand.  They are wildly out of step with the American people on these questions.  One of the reasons they get away with it is the media, which brings me to my second point.

Journalists tend to favor Democrats, which is no surprise, but their bias is especially pronounced on social issues such as abortion, an entrenched problem that dates back decades.  We're often told by media apologists that the press is merely biased in favor of conflict, which helps explain why big state-level controversies on hot-button issues tend to make national news.  Think of Arizona's SB 1070 on immigration, or Indiana's (grossly mischaracterized) religious freedom bill, or the ruckus over Texas' abortion law that outlawed most abortions after the fifth month of gestation.  These were big national stories.  Correspondents from New York and Washington descended on these state capitols, often framing Republicans as the bad guys pushing "divisive" laws.  Left-wing State Senator Wendy Davis was a media darling as she fought against the Texas bill, with protesters storming the rotunda and interrupting votes.  It was about "women's rights," you see.  Never mind that women heavily supported the 20-week ban.  Cast your mind back to those three major dust-ups I mentioned, then ask yourself whether you've heard anything about the Oregon legislation that even approaches that level of breathless, flood-the-zone coverage.  This bill theoretically checks all the "conflict" boxes (except, perhaps, large organized protests disrupting legislative sessions), but passed with little notice.  It seems as though certain controversial, or even radical, pieces of legislation dealing with red hot 'culture war' issues aren't terribly interesting to many in the press for some reason.  What a mystery.