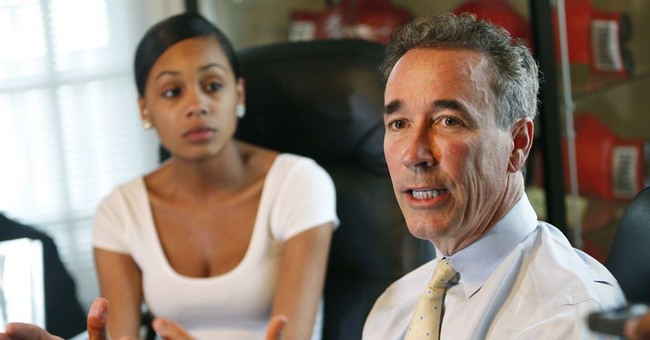 Last night, Virginians voted in primary elections ahead of this coming November's off-year election cycle, in which control of the state legislature will be decided.  Republicans currently hold a razor thin majority in the State Senate -- and an even thinner edge in the House of Delegates, thanks to a literal coin flip.  It's premature to draw any major conclusions about what's in store for the fall, but there were at least a few red flags for the Democratic Party, whose leadership has been rocked by several scandals.  The Washington Post published a story earlier in the week marveling at Gov. Ralph Northam's remarkable comeback from his blackface disaster, the basis for which was leaked following his shocking infanticide comments.  Imagine a similarly-situated Republican (ahem) getting this sort of ink:

The story behind the blackface photo is still shrouded in mystery, but Ralph Northam's influence as governor is growing again. @SchneiderG has another insightful look at the state of Virginia politics: https://t.co/0ZdtduvZKw

The story notes that Northam has re-emerged in public, has started raising money for his party again through his PAC, and may squeeze Republicans by calling a special legislative session on gun control following the horrible event in Virginia Beach.  What a turnaround, they marvel.  Any analogous attempted bounce back from a GOP leader would undoubtedly be met with unremittingly negative press.  He or she would never, for example, get a pass like the "shrouded in mystery" line in the tweet above.  The only "mystery" is whether Northam was the one in blackface or the one in a Klan hood in a photograph he selected, as an adult, for his own medical school yearbook page in the 1980s.  He admitted he was in the picture before reversing himself and claiming he was no longer sure -- although he was sure he'd worn blackface another time.

The reality is that Democrats are 'coming home' after going through the motions of trying to freeze out Northam.  He refused to budge, and now there are Republicans to defeat.  Priorities.  And there's nothing that can bring the media back onside like some pro-abortion zealotry and a gun control push.  So is the rehabilitation working?  Unclear, but some signs from last night aren't great:

And that’s @GovernorVA home base, where support for him endures despite the recent unpleasantness. https://t.co/Y3fEbN8kVC

Bad night for @RalphNortham in VA. The only incumbent senator he openly campaigned for, lost. Badly. & The Senate Majority Leader who defended Northam immediately is up by fewer than 1.5% with 85% rpt. Looks like that WaPo narrative about his strength was wrong... imagine that.

And before we get to the next part of the story, may I remind you that the white Democratic Governor admitted to wearing blackface, the white Democratic Attorney General strongly condemned the Governor before... apologizing for also wearing blackface.  And the Democratic Lt. Governor has been accused by two women (at least one of whom is a Democrat) of sexual assault, with some contemporaneous evidence.  Democrats in Richmond have resisted forums for his accusers to publicly testify.  And with that, here's the latest, er, foible among prominent Virginia Democrats:

Tough night for Virginia Senate Dems: Minority Leader Dick Saslaw is barely leading a progressive primary challenger, and Joe Morrissey unseated an incumbent despite his criminal record and accusations of sex with a minor https://t.co/cywKhPfLXt

Ah yes, Joe Morrissey, who unseated a state senate incumbent to become the party's nominee -- winning 56 percent of the vote.  Remember this guy?  Here's a news account from 2014:

Embattled Virginia State Delegate Joe Morrissey (D – Henrico) announced Thursday morning that he will resign from his seat in the General Assembly Thursday...Morrissey was sentenced to serve six months in jail after he entered an Alford plea in Henrico Court on charges of contributing to the delinquency of a minor. Morrissey did not admit he broke the law, but did admit there was enough evidence to convict him. The plea came days before Morrissey was scheduled to go on trial on charges of taking indecent liberties with a minor and possession of child pornography. The charges stemmed from allegations Morrissey was involved in an inappropriate relationship with a 17-year-old member of his legal staff.

He went to jail for his sex crime, and won a special election in his blue district from behind bars.  He emphatically denied sexual contact with the teenaged intern, then denied paternity of the baby she delivered months later.  He finally admitted the child was his. In addition to being a convicted sex offender, he's also a disbarred lawyer: "Morrissey is no stranger to controversy. His law license was suspended after he had been cited for contempt 10 times and he was jailed or forcibly detained for misconduct five times, according to court papers. His license was revoked in 2003 for failing to tell clients he had been suspended."  Morrissey's license was reinstated for awhile, then was revoked again in 2018.  Here's a federal court's ringing endorsement of this gem's ethics:

Morrissey now wants a promotion to the Senate. Democratic voters seem to like the idea. Their taste in leaders is, per usual, impeccable.