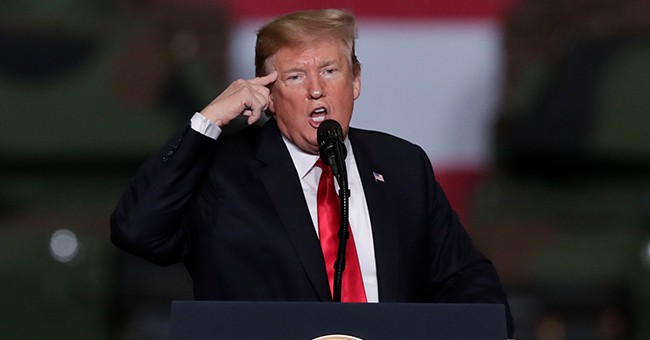 My first inclination when reading this story from CNN's Dana Bash was that it's a feint from Team Trump.  They need to talk about expanding the map in 2020 because some of the 'blue wall' states Trump punched through in the last cycle aren't looking too hot for the president at the moment.  One recent poll of Pennsylvania had Joe Biden handily beating the incumbent by a wide margin, and Michigan appears to be similarly challenging.  On one hand, it's very early, and public opinion surveys in both states conspicuously failed last time around.  On the other hand, when the candidate is reportedly instructing his team to suppress unhappy internal campaign polling -- not the media surveys that can be spun as skewed or fake -- that's...not a great sign:

Trump told aides to deny that his internal polling showed him trailing Joe Biden in many of the states he needs to win, NYT reports, even though Trump is also trailing in public polls from key states like Texas, Michigan and Pennsylvania. https://t.co/IohVU3QHWC

President Trump  told aides to deny that his internal polling showed him trailing former Vice President Joe Biden in key states, according to a new report from The New York Times. Later, when the polling in 17 states conducted by Tony Fabrizio leaked, Trump told aides to tell reporters that other data showed him doing better, according to the Times story written by Annie Karni and Maggie Haberman. The polling reportedly showed Trump behind Biden in a number of the states he needs to take to win reelection, though the Times report did not identify them.

It's ludicrously early to write off any of the industrial midwest states Trump won, or competed in, back in 2016 -- and as long as the economy stays in strong shape, the president will remain in the game. But identifying and attempting to flip a number of states Trump lost to Clinton is probably a good idea, if only to map out various potential paths to 270 electoral votes. To that end, have a look at what Trump campaign strategists told CNN yesterday:

CNN obtained a memo to the Trump campaign from pollster Tony Fabrizio about ideas for "expanding the map" to give the President more options for getting the 270 electoral votes needed to win the re-election, where he mentions looking at Oregon. In the memo, Fabrizio maintains that New Hampshire, New Mexico and Nevada -- all states that Trump lost in 2016 -- are now "highly competitive." Those are three states where the Trump campaign already has resources on the ground...Same goes for Minnesota, another state where Clinton beat Trump in 2016, but Fabrizio says to "keep an eye on" this cycle. Oregon, however, is no-man's-land for the national GOP. The last Republican to make an early play for Oregon was George W. Bush during his 2004 reelection bid, since he had come within 8,000 votes of Al Gore there in 2000. But Bush lost Oregon to John Kerry by 4 percentage points.

...To be sure, the Trump campaign is under no illusion that Oregon is winnable at this point, but they also know that re-taking states such as Pennsylvania, Michigan or even Iowa, where the President is traveling on Tuesday, are hardly sure bets. "If we are a month out and a previous victory like Michigan is not possible, would be nice to know other states are options," said the senior adviser. Plus, the Trump team knows from experience that pushing against the grain can pay off. When they spent money in the Wisconsin and Michigan in 2016 and sent their candidate there, many thought it was a fool's errand, until Trump turned those states red for the first time in a generation.

Look, if the October 2020 polling shows that Michigan is gone, I'm not sure that looking to a place like Oregon as the campaign's salvation would be a comforting prospect. The last time that blue state in the Pacific Northwest was seriously competitive was nearly two decades ago. John McCain, Mitt Romney and Donald Trump all lost Oregon by double digits. In the last two GOP midterm wave years, the Democratic gubernatorial nominee won both times, albeit by low-to-mid single digits. In 2014, the Democratic incumbent prevailed by six points despite a serious ethics scandal. He ended up resigning from office the following year amid a criminal probe, paving the way for a far-left replacement, who then won comfortably in 2018.

All of which is to say, Oregon is quite inhospitable to the GOP on a statewide level.  I'd love to see the data they're looking at that would make them tell a national reporter that they're exploring whether the state might be competitive -- or even mentioning it in the same breath as New Hampshire or Minnesota (I suspect Nevada and New Mexico will be heavier lifts demographically, but still likely easier than Oregon).  This is a stretch, but the Republican nominee won the Oregon Secretary of State election in 2016, but recently passed away from cancer.  Another toehold for Trump might be the insane left-wing violence in Portland, where authorities regularly humiliate themselves by bowing to Antifa.  Could Trump highlight that mess and cultivate a backlash?  I'll leave you with an example of why public polling can sometimes blow it so badly.  Remember the conservative coalition's giant upset victory in Australia recently?  Some pollsters might have seen it coming, but were too afraid to believe their own numbers, so the public never saw them:

Australia update: And wow, they actually admit it. This is pollster “herding” in action (though herding could also be due to weighting decisions about polls that do get released). Refreshing to see someone say it out loud... pic.twitter.com/E3l8c8M7gj