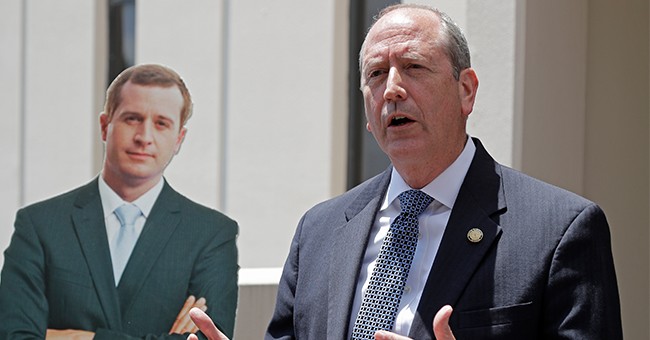 Let's rewind and re-establish the backdrop of this race:  The only unresolved contest of the 2018 midterm cycle is in North Carolina's Ninth Congressional District.  In that battle, the Republican nominee "won" last fall, but the results were never made official due to rampant and credible allegations of voter fraud.  An operative working for the GOP candidate's campaign, with a long and sordid history of shady tactics on behalf of clients from both major parties, is seriously alleged to have fraudulently cooked the books via an absentee ballot scheme -- perhaps allowing the campaign he was working for to win extremely close victories in both the Republican primary and general elections, each by less than 1,000 votes.  By allegedly employing an illegal ballot harvesting operation (which, I must add, is still perfectly legal in states like California and Washington), this individual appears to have manufactured some lopsided and implausible margins for his candidate among absentee voters.  Here's a flashback to Rich Lowry's piece at the time:

Bladen County, the largely rural area where Dowless focused his work, outpaced other counties in absentee-ballot requests — with 7.5 percent of registered voters making a request, higher than the 2 percent or so in most of the rest of the counties. Weirdly, only 19 percent of absentee ballots in Bladen were submitted by Republicans, yet Harris managed to win 61 percent of the absentee vote there. He didn’t win absentees in any other county.  The implication is that Dowless may have pocketed absentee ballots not to his liking, particularly from black Democrats. If so, this would truly be a damnable — and literal — instance of “voter suppression.” ... Although usually not as extensive or consequential as what may have transpired in North Carolina’s 9th District, vote fraud often involves absentee voting, and exploiting poor and vulnerable voters.

Witnesses averred that Mr. Dowless, a convicted perjurer, was involved in various manipulations, if not outright suppression.  Reports also suggest that the Republican candidate actively sought out the dodgy figure, in spite of warnings about Dowless' ethics and past.  Things reached a boiling point when the GOP nominee Mark Harris' son, a prosecutor, offered tearful testimony during an open hearing:

Harris' son, John Harris, is an assistant U.S. attorney in North Carolina. He said Wednesday that he reviewed the 2016 primary results after Harris was defeated by incumbent Robert Pittenger. He noticed oddities in vote-by-mail results in Bladen County, where the third-place finisher, Todd Johnson, won a near sweep of those ballots in the county. Dowless worked on behalf of Johnson in 2016. John Harris then looked at publicly available data on when ballots were received and noticed that the absentee ballots were returned in "batches." That led him to believe that someone was collecting ballots and turning them in.

"Did you talk about those concerns with Mark Harris?" asked Kim Strach, the executive director of the North Carolina State Board of Elections. "I did," said John Harris...Harris became emotional as his testimony concluded Wednesday. "I love my dad and I love my mom. I certainly have no vendetta against them," John Harris said. "I think they made mistakes in this process and they certainly did things differently than I would have done them." He added that there was an ongoing "exploitation of this process for political gain" by both political parties that he hoped would soon come to an end. Mark Harris could be seen crying at the end of his son's testimony.

With the questionable results thrown out, and a new election unanimously ordered by the state's board of elections, Harris dropped out of the race in February.  Republicans were relieved to have the tainted Harris out of the picture, nominating State Senator Dan Bishop to run under the party's banner in the special general election, scheduled for this September.  The contest is considered a very close tossup, but as the contours of the 'do-over' contest begin to take shape, some early indicators look fairly promising for the incumbent party:

Rs up 11 on generic ballot in district.https://t.co/LB8smLv2cH

Considering the controversy and scandal that has swirled around this district over recent months, Bishop's modest lead is a positive sign for the GOP.   Even better is President Trump's (+16) rating in the district, and the double-digit Republican advantage on the generic ballot.  This is just one poll, however, and there's a long way to go; plus, Democrat Dan McCready has been raising lots of money.  Waiting for further corroboration and additional information before chalking this up as a 'lean-R' battle would be wise.  Meanwhile, here's a look at Bishop's messaging strategy:

Will tying McCready to Bernie Sanders, AOC, Ilhan Omar and Nancy Pelosi be effective in this traditionally red district?  We'll see if and how the numbers ebb and flow over the summer.  National Democrats are licking their chops as they plan to highlight Bishop's sponsorship of a polarizing "bathroom bill," but sharp political observer Dave Wasserman wonders if that's anything close to the silver bullet that some progressives may envision:

I'll leave you with a data point out of a recent special Congressional election in Pennsylvania that may reinforce Kraushaar's assertion above that "it's not 2018 anymore:" Last week, Republicans held a safe Pennsylvania seat by a whopping 36-point margin in an R+17 district.  After a series of Democratic over-performances in specials throughout 2018, this race looked more "normal."  Overall, 2019 has been far kinder to the GOP in these sorts of elections than last year's wave year was.