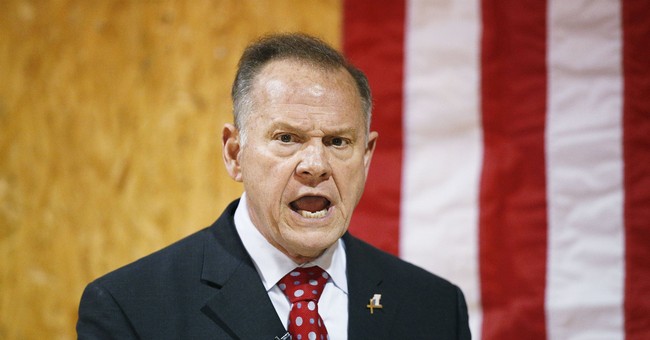 If Republicans want to maintain control of the US Senate after the 2020 election -- once again a top priority, for obvious reasons -- step one will be winning back the Alabama seat they lost thanks to the 2017 Roy Moore fiasco.  In spite of national headwinds in the 2018 midterms, the GOP had the advantage of an incredibly favorable Senate map, allowing them to net two seats in a heavily blue-tinted year.  The tables will turn in the next cycle, in which Republicans will be playing far more defense, albeit with a much more forgiving slate of races.  It is imperative that with a significant number of potentially-vulnerable incumbents' seats in play, the party does not blow a golden chance to pick off the lowest-hanging fruit of the year.  Alabama Senate seats shouldn't even be in doubt, let alone in Democratic hands; but one is at the moment, because Republicans chose an historically-flawed nominee in the special election contest to fill Jeff Sessions' old seat.  If that dumpster fire of a candidate were to try to run again, voters would surely have learned their lesson by now, right?  Perhaps not:

A new poll shows Moore leading a still-evolving field of Alabama Republicans competing for the nomination. He is the top choice of 27 percent of Alabama Republican voters, according to the Mason-Dixon Polling & Strategy Inc. survey. The state’s three Republican members of Congress finish well behind Moore: Rep. Mo Brooks would take 18 percent, Rep. Bradley Byrne clocks in at 13 percent and Rep. Gary Palmer would take 11 percent...State Senate President Pro Tem Del Marsh would take 4 percent, and businessman Tim Jones finishes with just 2 percent of the vote...Tommy Tuberville, the former Auburn University football coach, and state Auditor Jim Zeigler have also said they will run, though they were not tested in the survey.

Remember, Republican voters helped Democrat Doug Jones eke out a win over Moore, who could not overcome the torrent of credible accusations against him, some of which included significant contemporaneous evidence.  President Trump endorsed against him in the primary, a calculation that was vindicated by events.  If Moore -- who still hasn't even conceded the race he lost two years ago -- decides to run again, and the rest of the field is splintered, he would give yet another consequential gift to Chuck Schumer.  Philip Klein:

Democrats face an uphill battle in the Senate, as most of the seats Republicans will be defending are in states President Trump carried in 2016. What has made things look particularly daunting is the fact that Jones is facing reelection in a presidential election year in a state Trump won by nearly 30 points last time against a candidate who up until now, was assumed to be somebody other than the disastrous Moore. If Republicans take back the Alabama Senate seat, it would mean that Democrats would need to win at least four seats to take back the Senate were they to also win the presidency...Of the 22 seats Republicans will have to defend in 2020, Trump carried 15 of them by double digits in 2016. Just two — Sens. Cory Gardner in Colorado and Susan Collins in Maine — are in states that Trump lost. Three more are in states that Trump won by within about five points: Arizona, Georgia, and North Carolina. One might want to add Sen. Joni Ernst as potentially vulnerable in Iowa, which has proven a swing state in recent political history, even though Trump carried it by 9.4 points in 2016. It's much easier to conceive of a scenario in which Democrats could take three of those seats than they can take four. And their odds of that happening increase with Moore as the Republican nominee.

Susan Collins is looking pretty strong thus far, but no one doubts Cory Gardner will be in for a hard fight. Arizona and Georgia are trending purple, and North Carolina isn't a gimme. Nevertheless, Jones will enter 2020 as the single most vulnerable incumbent in the country:

Mason-Dixon poll: Sen. Doug Jones is in deep trouble heading into 2020. Perhaps only Roy Moore could get him re-elected. #ALSen pic.twitter.com/p9uZAQdGH9

My views on Moore are very public and very clear: He was unacceptable to me from the beginning. Mix in the serious accusations against him, and Alabamans' rejection of him in favor of a Democrat, and he should be considered untouchably toxic. If Republican voters in that state select him again, it would be an unbelievable act of self-sabotage. But it's far too early to panic. Yes, a crowded field could help Moore with a core group of dead-enders, but the primary is not a first-past-the-post election:

He has two massive potholes in front of him on the road to the Senate. One is his favorable rating: This same poll has Byrne at 25/2 in favorability among Alabama Republicans, Brooks at 27/8, and Moore at … 34/29...A guy who’s barely above water in popularity among his own party, is facing a race against one well-liked congressman in Byrne, and may yet have to cope with competition from Brooks for the populist vote is not winning a primary for a Senate seat. Which brings us to the other obstacle. Even if the establishment fails to unite behind a rival in the interest of stopping Moore and he ends up finishing first, unless he takes 50 percent of the vote he’ll be forced into a runoff with the second-place finisher. (That’s what happened in the 2017 special election, you may remember.) And there’s no way Moore is taking 50 percent against a multi-candidate field with participants as formidable as Byrne in it. His best-case scenario is that he ends up in a runoff, and the runoff would quickly become a referendum on the question of “We’re not actually going to nominate this guy again, are we?” How does he win that? In a test of Moore vs. Not Moore, Alabamians will remember 2017 and opt for Not Moore. Particularly with Trump goading them to do so in the interest of holding the Senate.

Why extend the drama -- or waste the president's time and energy, especially in his re-election year, on a race that should be a layup?

Share this on Facebook
Tweet
Fauci Says Everyone Coming into the U.S. Should Be Tested...But There's a Catch
Katie Pavlich
CNN Reporter: Actually, Chris Cuomo Will Be Back
Matt Vespa
Justice Thomas Asks: Where Is the Right to Abortion in the Constitution?
Katie Pavlich