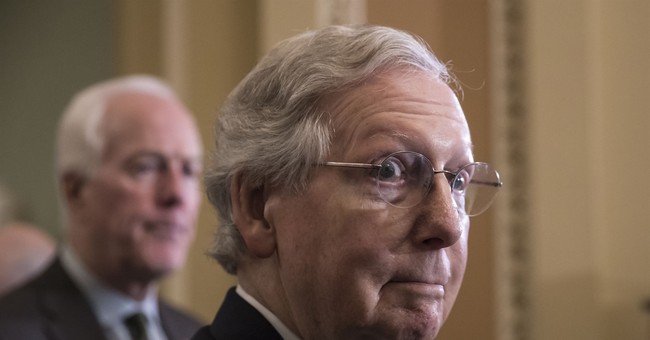 Earlier in the week, we wrote about Senate Majority Leader Mitch McConnell's plan to codify previous common practices to the upper chamber's consideration of relatively low-level presidential nominees.  Given the extraordinary and unprecedented delay and obstruction tactics by Senate Democrats, McConnell sought to limit formal debate over selections for district court posts and (mostly) sub-cabinet executive positions to two hours, down from the current 30.  Democrats have been exploiting the 30-hour rule as a matter of course, gumming up the works and dragging out the Senate calendar.  They've similarly been abusing cloture votes as a delay tactic, to an extent that's never been seen before.  A refresher on the numbers:

Across the first two years of each of the six presidents preceding President Trump, the Senate only had to hold 24 total cloture votes on nominations. That’s the once-rare procedural step that unlocks an up-or-down confirmation vote even though a minority has sought to block it. And in President Trump’s first two years? We had to hold a stunning 128 cloture votes to advance nominations. Our Democratic colleagues made the Senate jump over five times as many hurdles as in the equivalent periods in the Carter, Reagan, Bush, Clinton, Bush and Obama administrations combined.

In a Politico Op/Ed McConnell wrote that a number of Democrats actually supported his proposed reforms, but didn't want the changes to apply to President Trump.  No sale, he responded.  Republicans therefore moved forward on Wednesday, using the Harry Reid-pioneered 'nuclear option' to overcome Democratic opposition:

The Senate voted largely along party lines to change its debate rules — a move that will speed up the confirmation process for some lower-level judicial and agency nominees. Senate Majority Leader Mitch McConnell, R-Ky., used a complex procedural maneuver, known as the nuclear option, to cut debate for lower-level nominees from 30 hours to two hours. The change does not apply to Cabinet-level nominees, federal appeals judges, members of some boards and commissions or the Supreme Court. It also does not change the 60-vote requirement to advance legislation. All Senate Democrats opposed the move, and they were joined by two Republicans — Susan Collins of Maine and Mike Lee of Utah.

In response to overheated rhetoric and objections from Senate Democrats -- the large majority of whom blew up the nominations filibuster in 2013 after Republicans used Democrat-invented, Bush-era obstruction tactics against some of President Obama's nominees -- a former GOP Senate staffer with deep knowledge of these battles weighed in with a useful Twitter thread. Some of his key points, as he calls the "handwringing" from the Left "utter nonsense:"

Guess what? The answer is … something less than 15 minutes. That’s the typical amount of time senators usually take to debate district court nominations, and it’s often ZERO minutes of debate. They just vote. 4/

But what about a hypothetical world in which Senators had strong problems with a truly scandalous nominee?

During all that time, senators can speak on the Senate floor (and elsewhere) and argue against a nomination. They are NOT limited to the “post cloture debate time” impacted here. Nobody is being silenced. 10/

He continues that based on the relevant history, McConnell's move amounts to a "restoration of norms:"

Obviously the minority always wants to chew hours off the Senate calendar. That prevents more confirmations, and it prevents time for legislation. The minority lost an obstruction tool, not debate opportunity itself. Not in any real world way. 13/

"The practical effect here is that mostly non-controversial nominations will now get votes because more time is available and the Senate will be more productive. This is great for the courts and even more important for the sub-Cabinet nominations.  t will also make time for consideration of the handful of legislative vehicles that are likely to be considered and passed this year (e.g., the Defense Authorization bill). When Congress really starts working again legislatively, this will matter a great deal," he concludes.  None of these facts have prevented hypocritical Democrats from hyperventilating about McConnell supposedly harming norms, and wondering aloud whether the legislative filibuster -- which neither party has seriously contemplated touching -- might be next.  Dick Durbin is trying to give Cocaine Mitch a new moniker:

Perhaps Durbin needs a remedial history lesson, despite having had a front row seat to Dirty Bomb Harry's fateful decision -- actively supported by Durbin -- to turn the confirmation wars into 'nuclear' events.  And don't even try to use the tired "Merrick Garland" rebuttal.  Democrats made that bed for themselves, too.