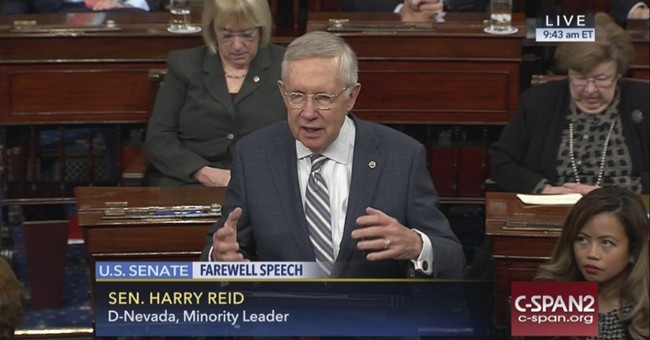 A new feature story in the New York Times Magazine reveals that Senate Majority Leader Harry Reid is dying.  We knew that the Nevadan had been diagnosed with a particularly aggressive and lethal form of cancer back in May, but it now appears as though the end is near.  Reid offers that candidly grim assessment himself early in the piece, which runs more than two dozen paragraphs:

Reid, who is 79, does not have long to live. I hate to be so abrupt about this, but Reid probably would not mind. In May, he went in for a colonoscopy, the results of which caused concern among his doctors. This led to an M.R.I. that turned up a lesion on Reid’s pancreas: cancer. Reid’s subdued and slightly cold manner, and aggressive anticharisma, have always made him an admirably blunt assessor of situations, including, now, his own: “As soon as you discover you have something on your pancreas, you’re dead.” I had planned to visit Reid, who had not granted an interview since his cancer diagnosis, in November, but he put me off, saying he felt too weak. People close to him were saying that he had months left, if not weeks.

I've never hidden my intense distaste for Reid's brand of politics, but no one should ever wish this sort of terrible illness on any partisan opponent.  Think of his family, as they grapple with this imminent loss.  Think of the profundity of staring at one's own mortality.  Think of the friends and colleagues who knew Reid on a personal level, and will be saddened by his passing.  To lose sight of these realities over political differences is to discard a piece of our shared humanity.  Political actions are fair game, of course, and the article doesn't shy away from two of Reid's lasting legacies -- namely, his penchant for ruthless and shameless ends-justify-the-means fisticuffs, and his fateful 2013 decision to eliminate the filibuster for nearly all presidential nominees:

Reid himself always seemed more predisposed to believing that the arc of the universe bent toward an ornery brawl. Reid once called the Federal Reserve chairman Alan Greenspan a “political hack,” Justice Clarence Thomas “an embarrassment” and President George W. Bush a “loser” (for which he later apologized) and a “liar” (for which he did not). In 2016, he dismissed Trump as “a big fat guy” who “didn’t win many fights.” Reid himself was more than ready to fight, and fight dirty: “I was always willing to do things that others were not willing to do,” he told me. During the 2012 presidential campaign, he claimed, with no proof, that Mitt Romney had not paid any taxes over the past decade. Romney released tax returns showing that he did. After the election, Reid told CNN by way of self-justification, “Romney didn’t win, did he?” Reid took rightful criticism over this.

As for 'going nuclear' over stalled judicial nominees -- another huge, unilateral Democratic escalation in the bruising confirmation wars -- Reid says he no regrets in retrospect, even as President Trump and Mitch McConnell have capitalized upon this precedent to great effect over the last two years:

McConnell’s and Trump’s own most substantial accomplishment to date, the appointment to the federal bench of an unprecedented number of conservative judges, including two Supreme Court justices who might well end up hearing a challenge to the Affordable Care Act, was made vastly easier by Reid’s decision, in 2013, to get rid of the filibuster for judicial appointments. Reid remains unrepentant about this. “They can say what they want,” he told me. “We had over 100 judges that we couldn’t get approved, so I had no choice. Either Obama’s presidency would be a joke or Obama’s presidency would be one of fruition.”

"They" are saying a lot, in fact. For instance, that Reid's historic power grab paved the way for the current conservative remodeling of the federal judiciary, which will only continue in the new Congress, thanks to the expanded Republican Senate majority.  There's a reason why some Senate Democrats, including Chuck Schumer, aren't nearly as "unrepentant" as Reid is these days.  Also, Reid did have a choice.  He and his crew could have chosen not to pioneer the Bush-era obstructionist tactics that later supposedly forced their hand, or whatever.  They could have chosen not to eliminate the judicial filibuster when Republicans turned their own creation against them.  Or they could have accepted Mitch McConnell's compromise offer before pushing the proverbial red button.  But they didn't, and now they're living with the consequences.  On this front, Hugh Hewitt is urging McConnell and the Republicans to further prioritize and streamline confirmations throughout 2019 and 2020:

And this piece underscores that @SenateGOP and @senatemajldr must either use #TheReidRule to change nomination process to reduce the "30 hours of debate" rule or go 24/7 until every judicial nominee is through committee and confirmed. Starting Thursday. No strolling. Spriniting https://t.co/KG8LJZHLJz

I fully supported McConnell applying the 'Reid Rule' to the Gorsuch SCOTUS nomination, and applauded further hardball maneuvers when Democrats tripled down on obstructionism.  Whether additional steps are justified may depend on the minority's conduct in the coming months.  Because these fights have become exceptionally high-stakes, zero-sum battles, and because the GOP is unlikely to notch many conservative legislative accomplishments with Nancy Pelosi as House Speaker, the elevation of qualified originalist jurists is the single most important task Republican Senators are faced with over the next two years.  Advantages are notoriously transitory in politics, so this moment in time must be exploited to the maximum extent possible.  Thankfully, Harry Reid's Republican successor seems to understand this quite well.