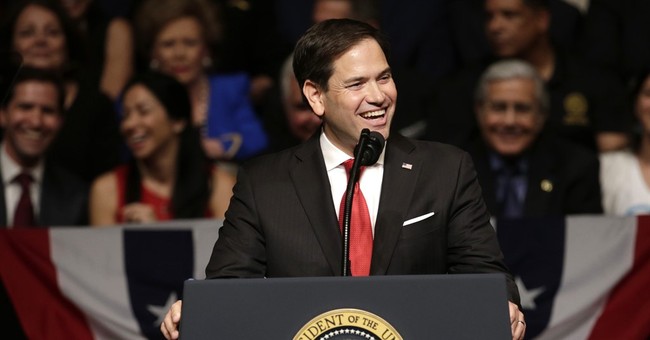 On yesterday's edition of Benson & Harf, I chatted with Florida's soon-to-be senior  US Senator, Marco Rubio, on a wide array of topics.  We got a little bit into the weeds on criminal justice reform -- a bill that I supported, but that Rubio ended up voting against a few hours after our segment aired.  Here is the statement his office put out following his vote in favor of advancing the bill, in which the Senator telegraphed that he'd be a 'no' if certain concerns were not addressed:

“Over the past several months, I have heard arguments on both sides of the First Step Act. Ultimately, I voted no because the Senate did not address serious concerns raised by local law enforcement, federal prosecutors and constituents in Florida about the sentencing reforms in this bill. As I’ve said before, reforms to our criminal justice system are needed because 95% of federal inmates will be released at some point. Preparing them to integrate into society and find meaningful work is in our best interests, but we must always err on the side of public safety.”

When a number of amendments he favored went down in flames, Rubio followed through by casting one of just 12 total 'nays' on final passage.  In our interview, he explained why (full audio at the link):

My wide-ranging conversation with @marcorubio, covering shutdown politics, criminal justice reform (he ended up voting no), Iran sanctions, midterm election lessons for the GOP, & his advice for his many Democratic colleagues running for president:https://t.co/elmyXOlp1T

"The second part of it is what's troubling and that is the incentive that they want to use to get these people to take these services is a reduction on the back end, a credit time, credit for the back end where they're able to serve part of the sentence in a halfway house or even in non-detention home probation. Whatever it might be. And then on the front end also reducing some mandatory sentences for certain cases. That's the part that I get nervous about because ultimately you're talking about some very bad people that have done some horrible things. We have to be very careful when we start walking in that direction. I think mandatory minimum sentences can sometimes have impacts that you look at it and say aren't fair, but we also have to recognize mandatory and minimum sentences have taken really terrible human beings off the streets for long periods of time. The best way to prevent a criminal from committing another crime is to not let them get out there...I don't understand why we didn't just do this for a small select group of crimes and start from there and build it up, as opposed to the reverse -- but they've decided to take a huge bite of the apple.  If I'm uncomfortable in the end I'm going to err on the side of public safety and vote against it."

I don't agree with his final assessment, but that's his rationale. The lopsided defeat of a few sensible amendments (that I would have supported, incidentally) likely foreclosed any possibility of Rubio voting aye. Later in the conversation, I asked Rubio if he had any advice for the many Senate Democrats who are in the presidential mix ahead of 2020. And I do mean many:

In the Democratic cloakroom as we vote tonight. Just realized I was surrounded by no less than 5 Presidential candidates, and there were only 10 of us in there. This is going to get interesting. ??

Rubio began with a self-deprecating joke about Democrats probably wanting to seek advice from someone who'd actually won, then pivoted to a more serious reflection: "Here's what I would say to people though ultimately, I don't regret running. It's one of the greatest experiences in my life. I met incredible people I learned a lot. I think I'm a better senator for having run and being exposed to realities and things that perhaps I didn't know before I ran and so forth. I would just tell people to ultimately know why you're running. Go out there and make your case, first to the Democratic electorate, and ultimately to the American people. A lot of what turns out happening in these elections is really out of your control. The strategy, the message that might have won four years ago may not win four years later because circumstances change," he said.

"You can't control circumstances. You can control who you are what you stand for. Go out and offer people something that's authentic that you deeply believe in. Work as hard as you can, and if it works out, you get to serve as president -- if it didn't, you've have the unique opportunity to run for the highest office in the land and an opportunity to contribute to the debate, and you'll be better for it."  Finally, because we also touched on Rubio's partnership with Sen Ted Cruz regarding additional sanctions against the Iranian regime, I'll leave you with a wonderful clap-back tweet from the newly re-elected Texan against America's Pope, whom he recently humiliated on the hardwood:

Merry Christmas, one and all!