Hmmm: Is Trump Exploring Dumping Pence From the 2020 Ticket? 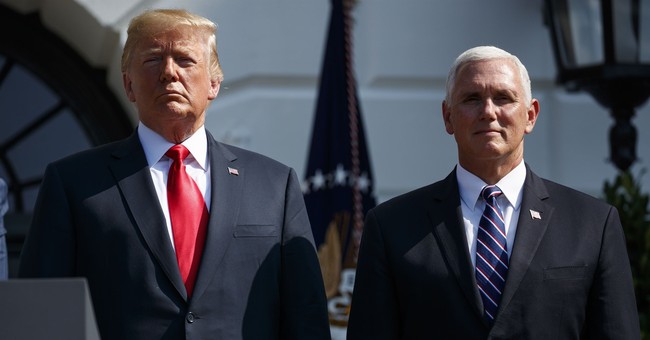 On one hand, the president has reportedly been asking around about Pence's loyalty lately, for reasons that escape me.  The guy's been hyper-loyal and deferential, to a fault.  On the other hand, the calendar still reads 2018, and I'm just not convinced that Trump's re-election team would be giving any serious consideration to a huge shake-up that would look needlessly desperate -- even before a single Democratic challenger has formally announced his or her candidacy.  Nevertheless, for whatever reason, the whispers are flying.  Who's spreading them and why (could it be related to the John Kelly/Nick Ayers knife fight?) is just as interesting as whether this story -- a lot of this juicy content is from a single agenda-driven reporter -- is remotely accurate:

Ominous signs of Mueller’s progress have not completely overwhelmed other subplots. On Monday, Trump hosted a 2020 strategy meeting with a group of advisers. Among the topics discussed was whether Mike Pence should remain on the ticket, given the hurricane-force political headwinds Trump will face, as demonstrated by the midterms, a source briefed on the session told me. “They’re beginning to think about whether Mike Pence should be running again,” the source said, adding that the advisers presented Trump with new polling that shows Pence doesn’t expand Trump’s coalition. “He doesn’t detract from it, but he doesn’t add anything either,” the source said. Last month, The New York Times reported that Trump had been privately asking advisers if Pence could be trusted, and that outside advisers have been pushing Nikki Haley to replace Pence. One veteran of Trump’s 2016 campaign who’s still advising Trump told me the president hasn’t been focused enough on 2020. “What he needs to do is consider his team for 2020 and make sure it’s in place,” the adviser said.

First off, what are the "ominous signs" from Mueller? Well, redacted documents suggest pretty extensive cooperation with the probe by Michael Flynn, and Fox's senior judicial analyst says Don Jr. has been telling friends that he expects to be indicted. Then there's the Roger Stone angle, and the developments with Michael Cohen and Paul Manafort (with some Democratic figures potentially in the crosshairs, too). What does any of this mean for the president and the presidency? We don't know. But the swirl of behind-the-scenes movement is clearly discomfiting to the crew at the White House and its occupant.  Could those worries, coupled with voters' midterm rebuke, have set off enough alarm bells that Team Trump has already concluded that a major chance is essentially to being viable in 2020?

Again, count me very skeptical, but the Times story about Trump inquiring about Pence's loyalty does give me pause.  The president is happy to punish disloyalty, so if enough people have been beating the drum about making a switch at the bottom of the 2020 ticket, he might be casting about for 'evidence' that could help him justify cutting Pence loose.  Meanwhile, what about the Haley rumors?  My gut is to call BS, especially because Haley has managed to extricate herself from a drama-filled administration with almost preternatural skill -- remaining on good terms with the principal, and emerging with an enhanced reputation.  If her plan is to gain experience in the private sector and make some money before reconsidering her political career -- after the Trump whirlwind has spun off the scene -- hopping right back into the crucible and tying her fate directly to Trump's re-elect seems like...the opposite of the strategy many have ascribed to her.  It doesn't pass the smell test.  But wait:

Outgoing United Nations Ambassador Nikki Haley reportedly met with President Trump at the White House on Tuesday. Haley solicited the meeting to touch base on a variety of topics, Bloomberg's Jennifer Jacobs tweeted. The meeting was not on Trump's public schedule for the day. The White House did not immediately return a request for comment.  Haley is set to leave her post at the U.S. Mission to the U.N. by the end of the year, and so far, it is unclear who Trump will pick to be her successor.

A secret White House meeting! That wasn't even on the president's schedule! With the vague purpose of discussing "a variety of topics"! Could this be happening? Eh, maybe, but the likeliest explanation is also the simplest: Haley is gearing up to leave her post at the United Nations, so she wanted to debrief Trump on everything that's been happening -- and there have, in fact, been some significant developments at Turtle Bay recently.  Plus, Haley is said to have asked for this meeting, not the other way around. It seems like people are grasping at straws to fuel a narrative that is at best premature.  Plus, would her presence on the ticket necessarily help expand Trump's appeal (as is absolutely necessary)?  That's very much an open question.  I'll leave you with the Vice President unobtrusively going about his normal business in Washington this week:

Welcomed dedicated public servants from the Council of Federal Executive Secretariats to the @WhiteHouse. They help fellow Americans w/ casework & support correspondence w/ the American people, and their service makes a world of difference in countless lives - THANK YOU! pic.twitter.com/EoxEyiAZzC