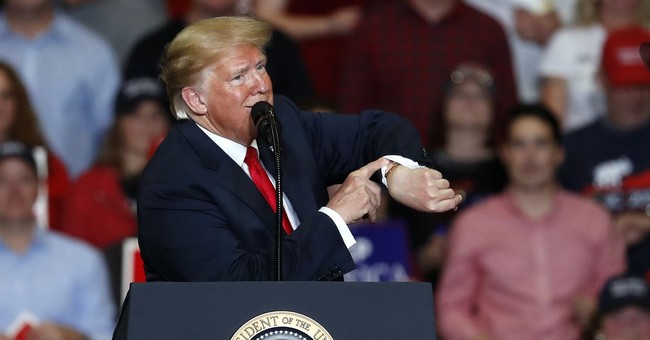 Before we get started, of course there are caveats and asterisks galore here -- and we'll get to some of them shortly.  But as a rough political approximation, this statistic is too intuitive and compelling to ignore.  Amid raging debates over whether the midterm election was a referendum on the president, and whether his job approval rating actually impacts electoral outcomes, here we have House Democrats' share of the national "popular vote" (which isn't a perfect barometer, due to uncontested races and other factors) lining up precisely with the national polling average on Trump disapproval:

Votes are somehow still being counted in a handful of races, but we're more or less at 100 percent at this point.  And the degree to which Democrats' national share of the House vote total exactly mirrors overall discontentment with the president's job performance is uncanny.  Relatedly, it looks like the opposition party will end up gaining 39 or 40 lower chamber seats when the final few contests are called, meaning that they'll surpass the historical average of 32 by a modest but significant margin.  And their raw vote total was nothing to sneeze at; they won by a hefty margin, with large turnout and a double-digit win among independent voters fueling their totals:

Per NBC News: Democrats won the House with the largest margin of victory in history for either party ever. https://t.co/gVRpZPIYfj

Now, a few counterpoints: First, multiple polls (and the polls were pretty solid this year) indicated that many voters viewed the 2018 midterms as an opportunity to place a check on President Trump.  Voters tend to like divided government, and bristle at single-party control.  Wanting to elect more members of the opposition party to help tap the brakes and hold a president accountable is not necessarily tantamount to hoping the president is defeated two years later.  Look no further than the landslide defeat Democrats suffered in 2010, just two years prior to President Obama getting re-elected.  Second, presidential elections are widely seen as national choices between two people.  We have no idea who the other person will be in 2020.  Candidates matter.  Third, it must be noted that Trump won in 2016 despite historically terrible favorability ratings.  Exit polls showed he limped into election day 2016 nursing a dismal (38/60) favorable/unfavorable split among the electorate that elected him, so he's unquestionably a defier of political odds.

That said, the 2018 results show that Trump isn't a magician who is unaffected by the fundamental laws of politics.  Last week, I made the case that Trump cannot expect to be re-elected simply by playing to his base and touting a strong economy and relative world peace (who knows what either of those fronts will look like two autumns from now).  The coalition of rural voters, traditional conservatives, blue collar Trumpublicans, suburbanites, and independents that barely pulled Trump over the finish line -- threading the needle in a handful of states -- did not remain intact this year.  Given the president's paltry margins, he essentially couldn't afford any defections, let alone many.  To win a second term, he's going to need to expand his appeal beyond the 2016 baseline, as oppose to contracting it.  Places like Orange County, California, where Republicans got absolutely decimated in every possible way a few weeks ago, cannot stay blue if Trump wants to win again (or if Republicans want to cut into the House Democratic majority, or have any hope of recapturing control).

Republican House members weren't the only ones wiped out by the blue wave in Orange County, Calif. Janet Nguyen, a rising GOP star and the first Vietnamese-American state senator in the country, lost her re-election bid. https://t.co/b8Q8WgNzMl

Looks like Gavin Newsom will be the first Democratic candidate for governor to carry Orange County since Jerry Brown did it 40 years ago. https://t.co/9lrFP8A7wS

I'll leave you with Karl Rove's advice to the Trump administration about how to lay the predicate for a successful re-election campaign, starting with -- gulp -- message discipline.  Click through to listen. For what it's worth, the president's current disapproval rating is 60 percent, according to Gallup.