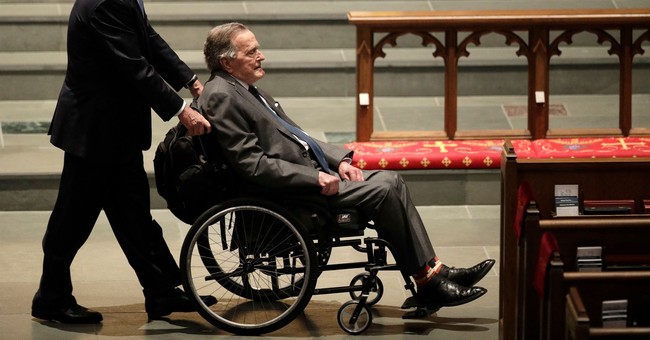 In an interview on Fox News Sunday, former Vice President Dick Cheney and former Secretary of State and Treasury James Baker joined anchor Chris Wallace to reflect on the life of George H.W. Bush.  The 41st President of the United States died late Friday, touching off an outpouring of grief, gratitude and well-wishes from the American people.  He was 94 years old.  During the discussion, which ranged from personal recollections to substantive examinations of Bush's extensive record of public service, Baker revealed how Bush spent his final hours before a "gentle and peaceful passing."  It's deeply moving:

Baker, who called Bush his best friend, discussed his peaceful final day. "He had a very gentle and peaceful passing," Baker said.  "They made arrangements for all of his children to call in to in effect tell him goodbye.In his last words, the last words George Bush ever said were I love you and he said those words to 43, his son former President George W. Bush, who had called in to say ‘Dad, I love you, I will see you on the other side, and President Bush said ‘I love you', and those were his last words…He had a very gentle and easy passing, the kind we ought to all hope we have."

George Bush had been fading in the last few days. He had not gotten out of bed, he had stopped eating and he was mostly sleeping. For a man who had defied death multiple times over the years, it seemed that the moment might finally be arriving. His longtime friend and former secretary of state, James A. Baker III, arrived at his Houston home on Friday morning to check on him. Mr. Bush suddenly grew alert, his eyes wide open. “Where are we going, Bake?” he asked. “We’re going to heaven,” Mr. Baker answered. “That’s where I want to go,” Mr. Bush said. Barely 13 hours later, Mr. Bush was dead. The former president died in his home in a gated community in Houston, surrounded by several friends, members of his family, doctors and a minister. As the end neared on Friday night, his son George W. Bush, the former president, who was at his home in Dallas, was put on the speaker phone to say goodbye. He told him that he had been a “wonderful dad” and that he loved him.

Death is an inevitability, so perhaps this is the best way to go: Saying final, loving goodbyes to everyone who matters in your life before dying at a ripe old age, after living an incredibly full and consequential life.  Bush was a war hero, a Congressman from Texas, US Ambassador to the United Nations, Republican National Committee Chairman, Director of the CIA, Vice President of the United States, and President of the United States.  As Cortney reported over the weekend, outgoing House Speaker Paul Ryan announced that Bush will lie in state at the Capitol rotunda from 7:30pm this evening through Wednesday morning:

The late President George H.W. Bush will lie in state in the U.S. Capitol Rotunda beginning with an arrival ceremony on Monday at 5:00 p.m. ET. The public is invited to pay their respects from Monday, December 3 at 7:30 p.m. ET until Wednesday, December 5 at 7:00 a.m. ET.

Of all the beautiful tributes to Bush after his death -- and there have been many -- an editorial cartoon depicting the former president reuniting in heaven with his beloved wife and the daughter they lost at a tragically young age (read this) went viral.  It brought tears to my eyes:

Godspeed President Bush. This is the bookend to the Barbara Bush cartoon from April. My thoughts are with the Bush family tonight. On a personal note, he was the first president I drew as a cartoonist (I began my career in 1988.) @JennaBushHager #presidentBush #rip #georgehwbush pic.twitter.com/lnBXCHgCnw

I'll leave you with Bush's handwritten note to the man who defeated him, delivered on the day of his successor's inauguration -- via presidential historian Michael Beschloss (click on the image to see the full page):