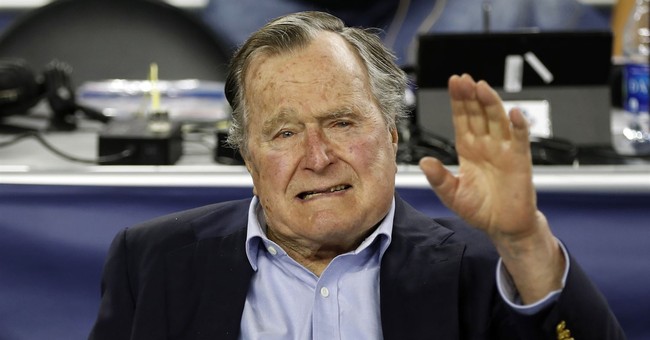 President George H.W. Bush, 94, passed away late Friday night. He is the 41st President of the United States and served the country from 1989 to 1993.

Bush 41 was hospitalized at Houston Methodist Hospital for an infection that spread to his blood.

The Bush family released the following statement about his death:

Statement by the Office of George H. W. Bush on the passing of the 41st President of the United States of America this evening at 10:10pm CT at the age of 94. pic.twitter.com/XUPgha2aUW

Bush was hospitalized in January 2017 for pneumonia, at which time they had to insert a breathing tube.

Former First Lady Barbara Bush died in April, at which time the former president had to bury the love of his life.

Barbara Bush welcomed George H.W. Bush home tonight. What a reunion it must have been. Rest well, Mr. President.

Just saw that President George Herbert Bush #41 has passed away... Rest Easy Mr President... We are all better men because of your friendship... We will miss you sir!! Until The Day.... #RIPPresidentBush41

What a life... full of love of family... strong faith... nothing’s more important. God bless the Bush family at this sad time.

George HW Bush has passed. Thinking of his family tonight, and revisiting his considerable contributions to this country, in service, in politics, and in spirit. #RIP ??

HW Bush was a champion of freedom

He oversaw the fall of the Berlin Wall and the collapse of the greatest evil of our generation, the Soviet Union

May his memory be a blessing

George Herbert Walker Bush has passed. He is in heaven with his beloved Barbara tonight.

We will not see his like again. A modest hero, he left a legacy of honorable service to the nation he loved.

It was a deep honor to serve in his Administration.