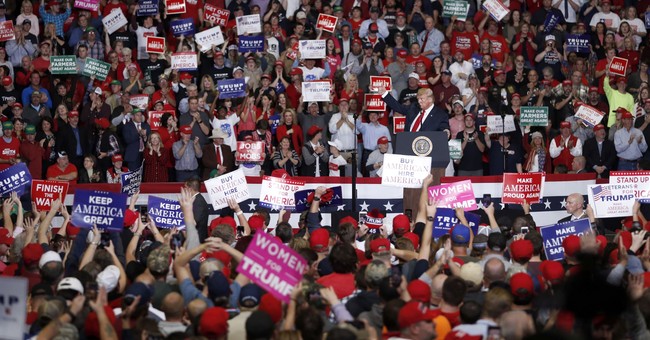 First off, if you haven't already voted, pause your perusal of this post, and go cast your ballot.  It's the most important thing you'll do all day.  Meanwhile, some of the early voting indicators we shared last week looked reasonably healthy for the Republican Party -- with all the requisite asterisks and disclaimers, which we'll revisit in a moment, firmly in place.  As of yesterday, how were the updated tallies looking?  NBC supplied some interesting data from eight key states.  Have a look, then we'll discuss:

As we think about this information, it's also pretty clear that early voting has exploded across the board, compared to the last midterm cycle (a GOP blowout).  More than 38 million early and absentee ballots have been counted in 2018, easily eclipsing 2014's 22 million.  Turnout is sky high:

Early voting to four days before the election: 2014 versus 2018. (via @maddow) pic.twitter.com/ibh4FDbTsN

On Benson & Harf  last night, Karl Rove mentioned a few positive signs for the GOP, based on early and absentee voting.  For instance, he said that in Arizona, where President Trump won by over three points in 2016, Republican voters outpaced Democratic voters in early voting by 7.2 percent.  This year, the GOP's advantage had swelled to 7.9 percent.  In Florida, Democrats built a 94,000-vote lead with earlies and absentees in the presidential year (Trump narrowly carried the state); this year, it's down to 24,000.  "I like looking at [that data] because the bigger they are, like Florida or Texas, [they] tend to sort of presage what's going to happen on election day," he said.  But he also issued this word of caution: "Here's why you shouldn't put total confidence in the election numbers because we don't know how many defections there are and there are places where there are going to be defections from the party of the chose of the primary voter. Second of all, because we have a large number of people, like in Florida, who decline to state their party or in Texas whom have never voted in a primary."

If you scroll through these numbers (it's addictive), TargetSmart analysts project rosy things for Republicans in Texas, Tennessee, and possibly Arizona (drawing similar conclusions that Jim Geraghty did last week regarding Martha McSally's potential cushion leading into election day).  The situation in Nevada looks bleaker, and Florida Democrats have improved their competitiveness over the 2014 blowout year, although Rove's point of comparison with 2016 still stands.  On the other hand, the early data in Ohio, Michigan and West Virginia also look pretty robust for Republicans on the surface, even though lots of polling shows a number of Democratic statewide candidates in those places leading comfortably (although one never knows where an astonishing potential upset may be brewing).  Looks can be deceiving.  Beware.  Vote.

Also, once again, just because someone is a registered Republican does not mean that he or she voted for every (or any) Republican on the ballot.  Plus, polling shows that independent or non-affiliated voters are tilting Democratic this year.  And then there's the matter of new voters, who can be difficult to properly identify in polling, and the impossible-to-discern vote 'cannibalization' effect of early voting vs. election day voting (i.e., Republicans have traditionally voted on ED, but if a lot of those people have switched to EV, the GOP may not have the votes to sustain the leads they've built).  All of which is to say that I think it would be a mistake to extrapolate too much from the early voting data and start crowing about the prospects of another Republican stunner.  For the reasons I discussed earlier, I'd be surprised if the GOP has a good night, given the backdrop of historical winds, national mood, and Trump-era electoral outcomes.  It looks more like the sort of night where the party in power does its best to salvage as many races as possible; then again, 2016 proved that sometimes expectations can be deeply flawed.  And I'm sure Republicans would rather appear to be over-performing on early voting than the opposite.

For what it's worth, on the Senate side, my best Republican sources say things have tightened considerably over the last two weeks.  They still feel pretty confident about North Dakota flipping, and holding Tennessee and Texas.  But states like Missouri and Indiana have gotten awfully close, perhaps with a tiny GOP edge.  And they say Arizona, Florida and Nevada remain toss-ups, but may perhaps be blue-shaded.  A few weeks back, I would have predicted that Republicans will net 1-3 Senate seats tonight.  Based on my most recent conversations, my final analysis pegged the number at +0 (51/49) or +1 (52/48).  It's not impossible to envision a -1 (50/50) scenario under which a Mississippi runoff would determine who the majority leader is next year, nor is it impossible to foresee the GOP holding one of those seats out west and winning a few midwestern tossups to make more serious gains.  These fates are now entirely up to voters -- which is why, if you haven't voted yet, but are still reading this, you ned to go vote.  I'll leave you with an evergreen reminder about exit polls:

Exit polls in 2016 were pretty garbage compared to what actually happened. https://t.co/u2SJG8QUHB