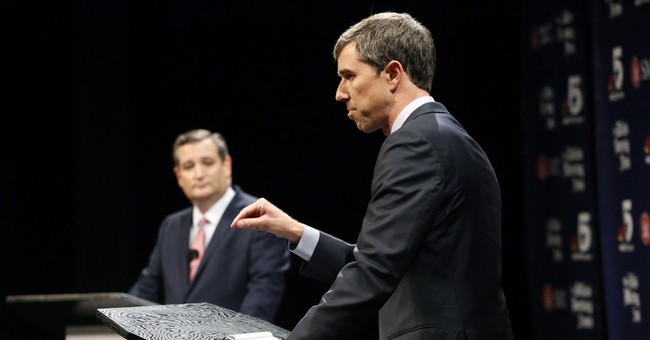 Robert 'Beto' O'Rourke is a media darling.  The press has showered him with almost as much glowing coverage as liberals across the country have showered him with donations.  He's been swooned over as 'Kennedyesque,' but not for the most applicable reason.  And not too long ago, a handful of polls showed him neck and neck with Sen. Ted Cruz in red Texas.  Things appeared to be tight enough that national Republicans poured reinforcements into the race, hoping to highlight O'Rourke's extraordinary liberalism.  He is pro-impeachment, pro-late term abortion, pro-gun control, and voted against a House resolution supporting ICE.  It was a cinch, therefore, to conclude that a Senator O'Rourke would have been a Chuck Schumer loyalist by voting to block Justice Kavanaugh's confirmation.  Just in case there were any doubts, 'Beto' erased them himself:

Beto O’Rourke: ‘I Would Not Have’ Voted To Confirm Brett Kavanaugh https://t.co/yWu6q6bPcp pic.twitter.com/Cb59Jj53I2

Might the Kavanaugh firestorm have helped focus the minds of some Texas voters, now that they've been vividly reminded of what's at stake in the United States Senate?  Quite possibly.  I recently mentioned that a source close to the Cruz camp told me that their internals were tracking close to a ten point lead.  We then noted an in-progress New York Times survey showing Cruz's advantage on the cusp of double-digits.  And here's Quinnipiac appearing to confirm the state of the contest:

O'Rourke is leading among independents, women (narrowly) and Hispanics (61/37).  But 94 percent of Republicans back Cruz, and there are a lot of Republicans in Texas.  Voters who say the Supreme Court is the most important factor to their decision break for Cruz by eight points.  He holds enormous leads with Texans who prioritize the economy and immigration.  O'Rourke has the advantage on healthcare.  But the most intriguing data point from the internals is this one:

The conventional wisdom is that Cruz is deeply unlikable, while O'Rourke is a breezy and affable -- yet Cruz outpaces O'Rourke on personal favorability by ten net points.  That must really sting for the journalists covering this campaign. Meanwhile, in the gubernatorial race, Quinnipiac has popular Republican Gov. Greg Abbott trouncing his opponent:

In #TXGov, incumbent Republican Greg Abbott, running against a Latina, leads among independents, women, and is nearly tied among Hispanics. pic.twitter.com/7YEpS4duR7

Texas Republicans typically perform far better among Hispanic voters than their partisan brethren in other states, so that last statistic isn't terribly surprising. I'll leave you with a national number, via NPR, that may be a bit more surprising:

"The Democrats Have a Latino Problem -- Hispanic voters were supposed to be the party’s future. It’s not working out that way."  Oh, and this is one hell of an oppo piece from Team Cruz: