Now What? Three Options for Senate Republicans, With the Kavanaugh Clock Ticking 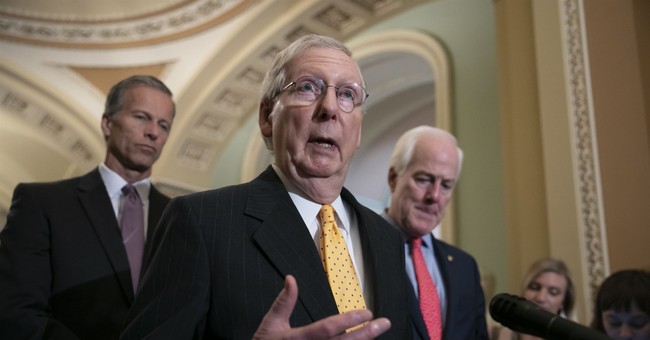 As I mentioned in an earlier post, there are now three allegations against Supreme Court nominee Brett Kavanaugh.  At least two are serious.  At this time, I cannot fairly characterize any of them as remotely corroborated or credible.  The first is a high school-era claim about an attempted assault in 1982, in which the accuser cannot name the location of the alleged incident or the month in which it occurred (with other details shifting, too).  Her only verifiable recollection involves her own list of four other named attendees of the party at which she says the encounter occurred, all four of whom have contradicted or failed to corroborate her memory -- including her own lifelong friend, a female Democrat.  The polygraph she 'passed' on this matter looks quite questionable now that its content has been revealed, and the statement to which she attested contains numerous hand-written 'corrections.'  Key details from the handwritten statement also diverge from her formal letter received by Feinstein.  She is scheduled to testify before the Senate Judiciary Committee tomorrow, as is Judge Kavanaugh.

The second allegation is even thinner.  It comes from a former Yale classmate of Kavanaugh's who claims that during their freshman year (~1983), Kavanaugh exposed himself to her at dorm room party while they were both drunk and playing drinking games.  Both the New Yorker and the New York Times aggressively pursued this allegation, and neither could find a single eyewitness (again, as named by the accuser) who could corroborate her account.  Indeed, the New Yorker conceded that the accuser wasn't confident about Kavanaugh's role in the incident, but moved forward with her allegation anyway after six days of 'reassessing' her memories and consulting with her attorney, a known Democratic partisan.  The New York Times, which did not run with this story due to lack of corroboration, reported that the accuser spent recent days phoning old classmates to try to patch together her own memory, confessing to several that she still wasn't sure she had the right guy.  After an initial refusal, her lawyers say she may or may not be willing to testify.

And now we have a surreal allegation from a client of celebrity lawyer Michael Avenatti, who claims in a sworn statement that she attended numerous parties in the early 1980's with Kavanaugh and his friend Mark Judge.  At these parties, she says she witnessed Kavanaugh drinking heavily and acting inappropriately.  More explosively, she says gang rapes routinely occurred at these events, with boys lining up to have sex with drugged or deeply inebriated girls.  She vaguely claims that Kavanaugh was part of the "efforts" to get girls excessively intoxicated, including "spiking" punch bowls.  She says that Kavanaugh was "present" at the gang rape gatherings, and that she saw him standing in or near the alleged "lines" of boys awaiting their participation in the "train" rapes.  She also claims that she, too, was eventually drugged in some way and gang-raped during a party at which Kavanaugh was also present.  All the while, she stops short of claiming direct knowledge that Kavanaugh was one of the rapists.  Avenatti also avoided that specific and personal allegation in a televised interview.  She attests that there were multiple assailants, victims, and witnesses, over many parties.  None of them are named. She says she told at least two people about her own assault at the time.

This last accusation is by far the most serious and lurid of the three.  If it's true, people should go to prison.  If it's true, there should also be an enormous amount of corroboration that these parties occurred -- from other victims and other witnesses.  Her claims have been met with understandable skepticism and caution by many observers, some of whom are asking fair questions about her refusal to directly accuse Kavanaugh of assaulting or abusing her in any way, her reference to "beach week" mere hours after Kavanaugh released his 1982 summer calendar featuring that term, her apparent willingness to continue to attend a long string of high school parties (often, apparently, as a college student) at which she was aware of gang rapes habitually occurring, and the lack of any of this coming up in any of the FBI's six background checks into Kavanaugh (or other trolling for allegations from Kavanaugh opponents).

I'll repeat: If this is true, or close to true, witnesses must come forward, offenders must be named, and criminal charges must be filed.  If it's untrue, it is the most grotesque, despicable political smear I've ever seen.  Also, if this report is correct -- and the new accuser refuses to provide additional names, witnesses or evidence -- her story should be assigned zero credibility, and those responsible for advancing it should be shamed.  Regardless, some of this -- no matter how far-fetched it may sound to some -- could take time to investigate and adjudicate.  Which may be the whole point.  So what happens now?  This observation keeps eating away at me:

It is now impossible that this will resolve without one side of the political spectrum believing a grave injustice was done. The ramifications of this nomination will be felt in our politics for decades to come no matter what the outcome.

I fear Klein's sentiment is inescapably true at this stage.  The new SCOTUS session starts in October.  There is a midterm election in November.  And the Senate could change hands in January.  Those dates are all relevant and are certainly weighing on the minds of Republicans and Democrats alike.  I see three possible scenarios for Republicans, none of them especially appealing:

(1) Conclude that even if he's innocent, Kavanaugh has taken on too much political water to remain a viable nominee.  It's worth noting that Judiciary Democrats (several of whom announced their opposition to his nomination on day one, or even prior), have shifted from demanding new hearings to unanimously insisting that Kavanaugh withdraw before the testimony they once desired even occurs.  Their egregious and partisan handling of all of this, starting with sitting on the first accuser's information for two months, then leaking it after Kavanaugh's hearings and against her wishes, is infuriating to many conservatives.  Be that as it may, some Righties who prioritize filling the Kennedy seat with a reliable constitutionalist may decide that Kavanaugh has become more trouble than he's worth.  They may pressure him step aside, or have the White House rescind his nomination, then move quickly to an alternate pick (likely a qualified, recently-confirmed woman).  Senate Republicans would have to ignore Democrats' inevitable squeals about the new, truncated process moving too rapidly, and simply resolve to confirming the new nominee before election day.  The downsides to this option are at minimum twofold: First, if Kavanaugh is innocent, the injustice done to him and his family would be almost inconceivably awful and stomach-turning.  Second, if the GOP is seen as "caving" to the worst, bad-faith tactics of the left, much of its own base would become absolutely incensed.  The midterms could be a bloodbath.

(2) Make a good-faith offer to Democrats, under which the confirmation process would be temporarily suspended, pending an FBI investigation.  The length (two or three weeks?) and scope (these three allegations) of this probe would be pre-determined, specifically defined, and limited.  I'll openly admit that I'm not sure if constraints such as those are logistically or procedurally feasible on the Bureau's end.  The goal would be to gather as many facts as possible about these three accusations -- and only these three. Kavanaugh has been the nominee since July and the timing of these claims is already the basis for enormous suspicion among many Americans.  It feels imperfect but sensible to declare an effective 'statute of limitations' on new accusations within the context of this process, in order to prevent an endless parade of new claims for the FBI to look into, further delaying the timeline.  This offer should also entail some mechanism by which the leadership of both parties would publicly vow that either Kavanaugh or his potential successor will receive a guaranteed, up-or-down Senate floor vote at the conclusion of either the FBI investigation or the new hearings for a replacement nominee -- whichever comes last.

This is a way to test if Democrats are genuinely interested in an effort to get to the truth via the work their preferred independent arbiter (the FBI, which as Joe Biden famously declared during the Anita Hill imbroglio, will likely not draw its own conclusion), as opposed to using any means necessary to prevent the SCOTUS seat being filled by someone whose judicial philosophy they object to.  If Democrats reject the offer, Republicans can tell voters that they tried to seek a compromise on Democrats' FBI probe proposal in a way that neutralized  or at least minimized the impact of raw political calculations, but were rebuffed. If Democrats accept, great.  Unless, that is, they go back on their word.  Is there any way to ensure Chuck Schumer would honor his pledge if, say, his party narrowly wins back the Senate and a replacement nominee needed to be confirmed on his watch?  What would stop Schumer from saying, "circumstances have changed [insert justification here], so our previous deal is null and void"?  It's a risk, and goalpost shifting is rampant these days.

(3) Hold the hearing, announce (with fair reason, in my view) that the first two claims are far too flimsy and uncorroborated to fairly deny Kavanaugh the seat -- and that the 'gang rape ring' accusation is a wildly implausible fabrication -- then link arms and vote to confirm Kavanaugh.  Rewarding any of these tactics would set disastrous precedents, after all.  The negative possibilities here are that additional, more credible allegations against Kavanaugh crop up, at least half the country believes he was rammed through without a reasonable attempt to verify any or all of the claims, and/or the resulting mess is cited endlessly by critics of Kavanaugh's rulings in order to undermine their legitimacy.  Some will try to do this regardless, as they did with Clarence Thomas.  But would the lasting damage be worse in this case?  Quite possibly.  And would the possible pounding Republicans might sustain at the polls in November be more or less severe under this scenario than it would if the party is abandoned by a demoralized and enraged base after what is widely seen as a damaging retreat?