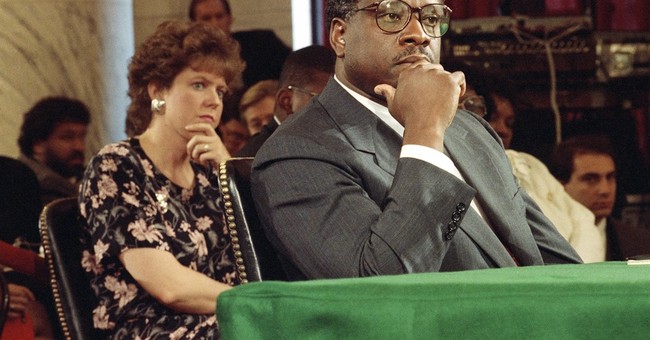 I've seen the following ad a few times on cable television over recent days, so I feel compelled to respond to the sleight of hand and guilt-by-association on which it relies.  The spot uses allegations against President Donald Trump and defeated Senate candidate Roy Moore to discredit Brett Kavanaugh -- the common theme being that all three men have been accused of varying forms of sexual misconduct:

Based on all of the currently-available evidence, lumping Kavanaugh in with the other two political figures is profoundly unfair.  Regardless of what you think of Trump, he was accused during the 2016 campaign of sexually aggressive conduct by numerous women.  In some of those cases, women offered forms of contemporaneous corroboration.  There's also the unavoidable fact that the boomlet of allegations was precipitated by the release of an audio recording in which Trump boasted of groping and kissing women without their consent.  It may be an uncomfortable reality for some Trump supporters, but the allegations against the then-candidate were much more serious and credible than anything we've seen about Kavanaugh.  Night and day.

The same is true about Roy Moore, in whose case in publicly sided with his accusers.  A pattern of conduct was made clear thanks to the statements of upwards of a dozen women, several of them produced corroboration from friends and family they told at the time -- and in some cases, forms of hard evidence to support their claims.  Nothing even approaching this level of proof has been delivered against Kavanaugh.  As is always the case, I'm open to new and credible evidence.  But this is where we are right now.  I've also seen endless comparisons to the 1991 showdown between Clarence Thomas and Anita Hill, in which an unsubstantiated eleventh-hour accusation from the latter threatened to bring down the former's SCOTUS nomination.  The Weekly Standard recounted in 2016 some of the reasons why, by the end of the renewed hearings, polling showed that most Americans believed Thomas over Hill:

Anita Hill levied charges at him, without corroborating evidence, and Thomas denied them categorically...In fact, it was less "he said, she said" than "they said, she said." Not a single colleague of Hill's came forward to support her allegations. In stark contrast, the very last panel heard by the Senate Judiciary Committee featured eight women, seven of whom had worked with Thomas at the EEOC, the Department of Education, and in Senator John Danforth's office...Each was given three minutes to speak, and each of them forcefully rejected the charges. Johnson, herself the victim of sexual harassment at a previous job, offered the most powerful testimony...

In her initial meeting with FBI agents, she omitted many of the salacious details that later exploded in the Senate confirmation hearings. As Hill presented a much more scandalous story to the Senate Judiciary Committee, senators Orrin Hatch, Chuck Grassley, and Arlen Specter had questions about why her story had changed so dramatically. "I did not tell the FBI all of the information," Hill replied to Specter, because the "FBI agent made clear that if I were embarrassed about talking about something, that I could decline to discuss things that were too embarrassing, but that I could provide as much information as I felt comfortable with at that time." But her account was immediately disputed by both of the FBI agents who had interviewed her, Special Agents Jolene Smith Jameson and John B. Luton, who observed her Senate testimony and then filed statements detailing what they described as Hill's untruthfulness.

There's more.  Read the whole essay, which was published in response to an HBO film that lionized Ms. Hill, glossing over or ignoring reams of important evidence that supported Thomas.  The attack machine failed to derail Thomas' nomination despite a strong effort, and the public lopsidedly believed the nominee at the time.  Perhaps that's why Hollywood intervened to help rewrite history.  Flash forward to today.  We're looking at more unsubstantiated allegations (this time from decades prior) against a SCOTUS nominee viewed as likely to shift the Court's jurisprudence to the right.  Kavanaugh's polling has been mediocre to unfavorable, with the swirl of bad-sounding, Me Too-era controversy harming his favorability.  Democrats, aware that it's impossible to prove a negative, have been beating the drum for an FBI investigation that would drag out this process even further.  Most conservatives are furious at the timing and unfalsifiability of these accusations and understandably see calls for FBI involvement as a shameless delay tactic.  But what if it's actually in Kavanaugh and the GOP's interest to relent on this point?  Allahpundit's logic here ought to be considered:

Which side would benefit more from an FBI investigation at this point? https://t.co/43OqTSGEyT pic.twitter.com/Ehw0fWQnLn

Realistically, the odds of getting a new nominee confirmed before the midterms are nearing zero if they’re not there already. We’re a week into this clusterfark, with another flimsy accusation having been leveled last night...Democrats have spent the last week putting their chips on the Bureau’s credibility, insisting that nothing short of a follow-up FBI background check can legitimize this process. If the GOP called their bluff by supporting an FBI probe and the Bureau ultimately came back with nothing by way of corroboration for Ford and Ramirez, Kavanaugh’s credibility would get a massive boost among the public. Not among the entire public; lefty partisans will always find a way towards a conclusion in which the right-winger is an evil villain. But because the Dems themselves have invested so much over the last few days in the FBI’s authority, a short probe that produced no evidence of misconduct would function as an imprimatur of innocence. Which would be a very good thing for Justice Kavanaugh’s personal and professional reputation...

It’s *very unlikely* that Kavanaugh can dig his way out of the suspicion that’s been piled on him through his own efforts at Thursday’s hearing. Ford’s allegations are so thin on specifics that there’s next to nothing by way of hard evidence he can provide to clear himself. He’ll spend hours being grilled about teenaged partying, whether he ever waved his schwanz in a Yale classmate’s face, etc, while Ford will be questioned very respectfully about her story. All she has to do is prove that she believes that it happened, not that it actually happened, and he’ll end up damaged. It may be that an FBI investigation, as silly as it seems under the circumstances, is the one thing that can lend some independent nonpartisan authority to his claims of innocence...The long game here for Democrats isn’t blocking Kavanaugh from the Court at all costs; the long game is damaging him to the point that his rulings on the Court can be delegitimized, including and especially any ruling to overturn Roe...The one thing that might deflate the attacks is the FBI turning around and saying, “We talked to people and couldn’t find anything.”

I think this overall argument has real merit, though I also sympathize with demands from incensed Righties that no further concessions be surrendered to the Left's bad-faith smear merchants.  For more on that view, I'll leave you with this:

And as we noted yesterday, Kavanaugh is sounding ready for this fight:

.@Arianedevogue obtained the full Kavanaugh letter sent to the leaders of the Judiciary Committee: “I will not be intimidated into withdrawing from this process,” he writes. pic.twitter.com/zo1mixjgza