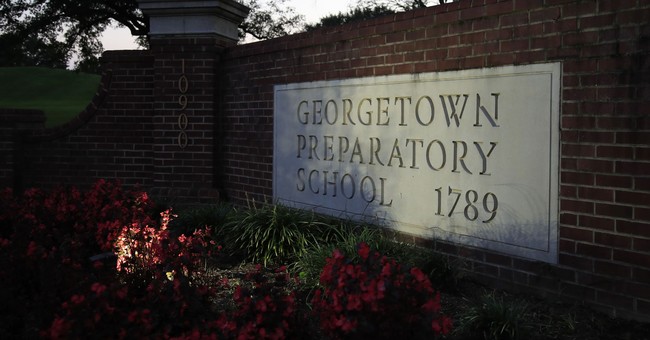 Michael Avenatti dropped his promised bomb on Brett Kavanaugh's confirmation earlier this morning, throwing the whole process into further doubt.  As we attempt to assess the seriousness and credibility of the rumored (and somewhat confusing) 'gang rape ring' claim, I'd like to address a few points about the original allegation.  The gang rape story could render our dissection of other claims moot.  It may not; time will tell.  In any case, Matt touched on this earlier, but the extent to which members of the media -- including some who do or should know better -- are misusing the term 'corroboration' is breathtaking. We were treated to a flurry of Wednesday morning headlines and tweets about how the legal team for Brett Kavanaugh's high school-era accuser had produced sworn statements from four people "corroborating" her story.  This was framed by some as an important new development.  Here's just one prominent example:

These declarations do not, in fact, "corroborate Christine Blasey Ford's claims of sexual assault against Kavanaugh."  These declarations simply reaffirm something that we already knew: That Prof. Ford told a handful of people, including her husband and therapist, about her contemporaneously-uncorroborated memory after she first shared, re-surfaced, or re-imagined it -- 30 years after the alleged incident.  In other words, these documents corroborate hearsay, presented to people in 2012 and beyond; they corroborate absolutely nothing about what did or did not occur 36 years ago.  What evidence, aside from Ford's decades-old recollection, do we have about what may have happened at that party circa summer 1982, the approximate date and exact location of which the accuser cannot identify?  None:

The “burden of proof” issue is the crux of the debate surrounding Dr. Ford’s accusations against Judge Kavanaugh precisely because she has produced no evidence to support her accusations against him. She has no physical evidence, though that is unsurprising given that she is alleging a three-decades-old-crime. More surprising, and more disconcerting, is the fact that the direct witnesses that she identified disclaim any knowledge of the crime she says they were present for; the fact that her therapist’s notes of her statements neither name Kavanaugh nor square with her other specific allegations; and the fact that Senator Feinstein herself did not pursue the allegations until after the regular confirmation hearings had ended and Kavanaugh was poised for a successful vote. In sum, Dr. Ford’s accusation against Kavanaugh is unsupported save for the accusation itself, and those who say that she told them about Kavanaugh in the last handful of years, three decades after the alleged incident. And Kavanaugh, for his part, denies the accusation categorically—he denies assaulting her at any time or any place, including at the unspecified house party in an unknown house during an unknown year.

By Ford's own account, she told nobody about the alleged incident at the time, and remained silent for the next 30 years.  The newly-released statements from Ford's attorneys further suggest to me that she isn't intentionally fabricating a falsehood to sink Kavanaugh, just prior to his confirmation votes.  Recall that Ford stepped forward, wishing to remain anonymous, back in July.  The Democrats who possessed her story for approximately two months did nothing with it until they chose to disregard her wishes and leak it publicly after the Kavanaugh hearings concluded, cynically turning around and demanding a thorough investigation into a matter they'd ignored.  Sen. Feinstein reportedly told colleagues the allegations were too thin and distant to merit serious scrutiny over the summer, then drastically changed her tune after the leak.  None of that is Ford's fault, and the fact that she was telling people about a resurrected, repressed, decades-old memory long before Kavanaugh was named as a SCOTUS nominee strongly suggests that she sincerely believes on some level that she was victimized by him.  The trouble is (a) that science tells us that such memories can be extremely tricky and unreliable (again, this is not an aspersion against Ford), and (b) that her other, crucial supporting memories are either nonexistent or have been contradicted and un-corroborated by every alleged eyewitness she herself places at the party -- including her lifelong, female, Democratic friend.  This is also interesting:

WATCH: Brett Kavanaugh's attorney Beth Wilkinson tells us that lawyers for Dr. Ford have not turned over the results of her lie detector test or her therapist’s notes to the Senate Judiciary Committee. pic.twitter.com/ClAUNhwReY

The lie detector test was touted by many Kavanaugh opponents as a count in favor of Ford's credibility.  Seeing the exact questions she was asked, and how she answered, could be useful.  For the record, I very much doubt that she and her partisan advisers just made up the fact that she took and passed a polygraph.  And as I stated earlier, it wouldn't be surprising that she passed a lie detector test because it's likely that she firmly believes what she's saying.  This could be a result of the fact that she's telling the absolute truth, or it could be because she's come to internalize a false or distorted memory -- which is not uncommon, especially over so many years.  That's part of the reason why polygraphs aren't admissible evidence in a court of law.  For what it's worth, this Kavanaugh process is neither a criminal trial, nor a mere "job interview," as some have spun it.

As for the therapist's notes, those are also worth looking at, for two primary reasons.  First, Ford and her lawyers have shifted their versions of how many people were at the alleged party, the genders of those people, and the number of alleged attackers.  The therapy records reportedly show that Ford said in 2012 that four boys attempted to assault her.  She now says she said two boys were responsible, and that the therapist misunderstood her explanation, which simply mentioned four boys being at the party.  The 'official' count, at least as described in the Feinstein letter, named three males and another female at the party.  These seemingly minute distinctions matter a great deal because they are the only form of potential contemporaneous corroboration to evaluate in this case.  The fact that they're inconsistent, and that all of the alleged witnesses have failed to back up Ford's recollections, cannot be dismissed as irrelevant.  Given the earth of actual available evidence, they must be regarded as highly relevant.

Second, the therapy notes may reveal the month in 2012 when Ford first disclosed her account.  Kavanaugh supporters and opponents alike have hypothesized that this memory may have arisen after Ford saw media reports identifying Kavanaugh as a top contender to fill a possible Supreme Court seat under a Romney administration.  That's a perfectly plausible scenario, but even if the dates align perfectly, it's not dispositive.  Why?  Because both 'sides' would have totally reasonable theories of what it would mean.  Those who believe Ford could argue that seeing Kavanaugh's name in that context could have triggered a dormant memory.  Those who are skeptical of her story could argue just as easily that false memories are often formed by sub-consciously filling in certain gaps along the way, and the buzz about Kavanaugh could have contributed to that effect.  Put simply, even if Ford shared her story with her therapist shortly after Kavanaugh's name cropped up in the news, that wouldn't prove anything in either direction.  Which brings us back to the utter lack of compelling proof here.  The excerpt above comes from a strong Weekly Standard essay about the Ford allegation, Kavanaugh's nomination, and the relevant standards of evidence.  The piece goes on:

Undecided senators face a truly daunting choice. On the one hand, their sympathy for Ford’s allegations, even in the absence of supporting evidence, might lead them to prefer that President Trump nominate someone else instead of Judge Kavanaugh. “After all,” they might reason, “if there is even just a one-tenth of one percent chance that a nominee committed a crime like that, then why not nominate someone else?”  But on the other hand, the senators also know that allowing a belated, evidence-free accusation to stop a Supreme Court nomination will immediately create incentives that undermine the Senate’s confirmation process in future nominations. Every future nominee’s critics will know which glass to break and which lever to pull, in the case of emergency. And that, in the end, is the senators’ true burden: to choose wisely in the decision to confirm or deny Kavanaugh’s nomination, but also to make that choice in the way that best enables the Senate to carry out the Constitution’s “advice and consent” power for future nominations.

I'll leave you with a genuinely scary and depressing montage of Democrats turning the longstanding presumption of innocence on its head against Kavanaugh, embraced for transparently fleeting and partisan advantage, and with virtually no regard for the attainable truth:

Chuck Schumer on Judge Kavanaugh: “There is no presumption of innocence.”pic.twitter.com/Ftt9WmQos2

One more point, setting aside the extraordinary accusation from Avenatti's client: The Yale allegation is not credible, in my view, for reasons I've stipulated.  Ms. Ramirez initially declined to testify at all, with her attorneys  ducking half-a-dozen separate requests from the Judiciary Committee to lodge a formal complaint, which could kickstart their investigation into the matter.  Now, her lawyers (who are parroting the Democratic line) say she's maybe open to testifying.  But maybe not.  Read Allahpundit on the game-playing.