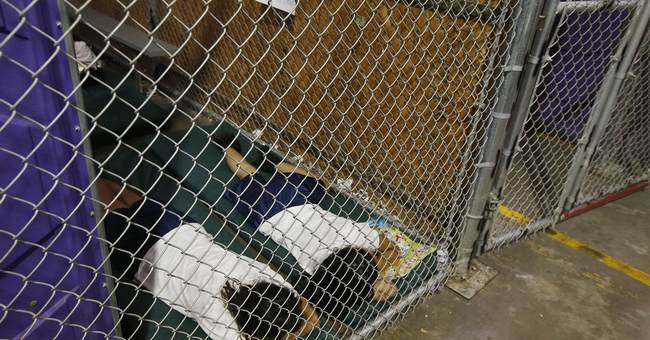 Suffice it to say that I haven't felt this disillusioned about our political process in quite some time.  First, we have the President of the United States presiding over a disastrous policy, both morally and politically, being bludgeoned into a rare retreat after the extent of the failure was no longer disputable.  Once he ran out of excuses, his administration abandoned its previous pretense that its hands were tied by existing law, all while he acted like a bystander who merely happened upon an unpalatable scenario.  What he was seeing was his policy.  The forces within the administration who convinced him to pursue this now-discarded path should be held accountable for the debacle they created -- especially since it could have been handled so much better.  Next, we have the Republicans in Congress, who seem congenitally incapable of passing any immigration legislation.  There are two scheduled House immigration votes later today, but as I reported on Wednesday's Daily Briefing, leadership sources sound decidedly sour about the passage prospects of either bill:

That was about 24 hours ago.  Earlier today, I followed up with my sources, and heard the exact same thing.  Prognosis: Weak.  I happen to favor the so-called 'compromise' bill (as does the president) because it tackles a number of important issues while striking a reasonable balance.  It has been amended to more permanently address the family separation issue, as well.  And yet, chances are dim that it will garner support from 50 percent-plus-one of the Republican-controlled lower chamber.  And even if it somehow clears that hurdle, it appears dead on arrival in the Senate.  Upper chamber GOP lawmakers seem to be coalescing around a pretty good bill, which perhaps offers the greatest hope for something actually becoming law, even as House conservatives and moderates teeter on the brink of revolt, and the president is foolishly denouncing a central plank of his own party's Senate bill: More immigration judges to process claims, something that is sorely and unquestionably needed.

Then, there are the Democrats.  They demanded that Trump, and Trump alone, "fix" the child separation problem through executive action -- even as they simultaneously endorsed a reckless, shoddy, totally unworkable bill that was so badly written that its provisions are already sparking deserved political attacks against those who blindly backed it.  When Trump belatedly complied with their demands, they instantly pivoted to a new attack, brazenly arguing that detaining families together as they await asylum adjudication is the new monstrosity that must be resisted:

Durbin spitting??over Trump's executive order:
"His new Executive Order criminalizes asylum-seekers and seeks to indefinitely detain their children. Locking up whole families is no solution at all."
Asks Rs to "call for an end to this monstrous Trump Administration policy."

This is the veritable definition of bad faith, and it helps explain why so many Americans loathe Washington, and why so many conservatives distrust compromise.  Democrats are empowering the "don't give an inch" crowd, perhaps deliberately.  It's cynicism all the way down.  Incidentally, the Left's activism against family separation (which touched a nerve with Americans from across the ideological spectrum, thanks to the unacceptable images that emerged from the humanitarian mess) was popular.  Their new stance, essentially described as the return of "catch and release," is not:

Also when given these choices for how to handle the situation:

Release all & order adults to report back at later date: 19%
Detain families together while awaiting court date: 44%
Arrest adults/separate from kids: 12%
Arrest adults AND kids, send kids to juvenile detention: 8%

Less than one-fifth of voters favor a return to catch and release. Republicans should pass the Senate bill, which ends catch and release, while expediting asylum claims.  It provides for shelter, food and medical care for the detained illegal immigrants, and streamlines swift, full-family deportations for those whose asylum claims are rejected.  It ends -- or at least massively reduces -- the previous status quo, which was huge magnet for illegal immigration, as large percentages of illegal immigrants who were given court dates just never showed up for them.  Unsurprisingly.  If Democrats want to say that families being housed together as they await their immigration decision is cruel or "abuse," let them make that argument.  Americans don't agree.  If a family is approved, the gift of entry into America is worth waiting for.  If a family is rejected, they're at least kept intact before being shipped home together.  We have laws for a reason.  People should not be rewarded with loosely-enforced, contingent entry into our country as the default policy response to unlawful entry.  David Frum, a strident Trump critic, has a strong piece out that (in part) documents the Left's increasing open borders radicalism

Finally, we have the media, who -- good work aside -- cannot help themselves but embarrassingly betray their biases.  When scores of children were held in cages during the Obama administration, a corresponding cacophony of outrage never materialized.  The press was too busy covering Saint Barack's "scandal free" presidency.  And while there was plenty of legitimate fodder for harsh criticism of the Trump administration's actions and decisions over recent weeks, a number of Obama-era incidents and images were falsely attributed to Trump.  Perhaps this was deliberate dishonesty.  Perhaps it was confirmation bias -- certain details fit The Narrative, so they were wielded without much regard for context.  Here's the latest example, which made the rounds among breathless journo Twitter this morning:

And the primary allegations are from...2016.

A year BEFORE Trump became President.

Just pointing this out. https://t.co/Xc9LIfsNCG

These Virginia-based accusations all stem from Obama-era alleged abuse, yet without that important information, many casual readers are left to assume that You-Know-Who is responsible.  This telling scorecard derived from the Associated Press story is especially egregious:

It's even worse than that, even acknowledging some 2017 allegations:

It is calculated misinformation to bury the date of the allegation, injecting an important but incendiary story into this media cycle without headlining a date stamp isn’t #FakeNews, it is deeply biased, agenda-driven “reporting” that should embarrass the editors.

In short, political class, if you're baffled as to why so many people detest you -- all of you -- look no further than  the incompetence, deceit, callousness, intransigence, bad faith, and bias on parade over the last 96 hours.  Good job, everyone.  I'll leave you with this wince-worthy performance: