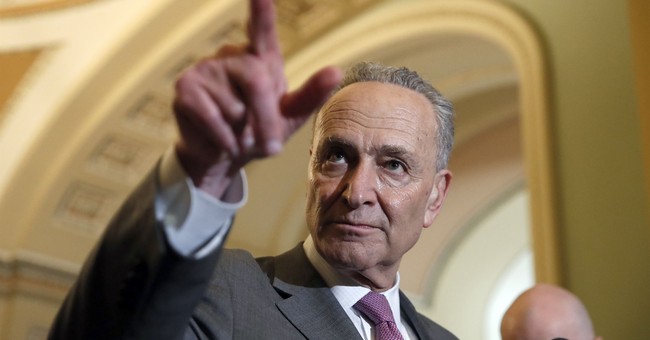 Last night, Senate Minority Leader Chuck Schumer declared that as the country grapples with the moral and logistical implications of the Trump administration's zero-tolerance policy at the southern border, addressing it through the legislative process is a futile endeavor.  That may seem like a bizarre opinion for a high-ranking legislator to be espousing as his official take, but that's where we are.  Responding to questions about various GOP proposals that would ease and address family separations by federal agencies, Schumer said that he's not interested in Congressional action; the real goal, he said, was to keep the pressure on the Trump administration (see UPDATE below):

Senate Democratic Leader Charles Schumer (N.Y.) on Tuesday dismissed a legislative proposal backed by Republican leaders to keep immigrant families together at the border, arguing that President Trump could fix the problem more easily with a flick of his pen. “There are so many obstacles to legislation and when the president can do it with his own pen, it makes no sense,” Schumer told reporters. “Legislation is not the way to go here when it’s so easy for the president to sign it.” Asked if that meant Democrats would not support a bill backed by Senate Majority Leader Mitch McConnell (R-Ky.) to keep immigrant families together while seeking asylum on the U.S. border, Schumer said they want to keep the focus on Trump...Democrats want to keep the pressure on Trump instead of having Congress assume responsibility for the growing crisis.  Schumer’s position immediately raised speculation over how long Democrats would stick to their position if Trump refuses to change his mind. "Let's hope we never get to that," ...Schumer said.

It's quite odd for Schumer to say that "legislation is not the way to go here," when he's personally signed onto a bill written by Dianne Feinstein -- as has every single member of the caucus he leads. That bill, incidentally, is an unworkable mess that would lead to insane policy outcomes if implemented.  The most moderate Senate Republican, Susan Collins, succinctly explained its most glaring, fatal flaw: Senate Democrats' proposal "would essentially prevent arrest within 100 miles of the border, even if the person has committed a serious crime or is suspected of terrorist activities,” she said.  That seems...slightly problematic, no?  Given the legislation's breathtaking recklessness and sloppiness, and Schumer's subsequent dismissal of the legislative process as it relates to the family separation issue, it would seem as though the Feinstein bill was a pure posturing move. The children don't need messaging votes.  Schumer expanded on his thoughts via Twitter last evening:

Anyone who believes this Republican Congress is capable of addressing this issue is kidding themselves. @realDonaldTrump can end this crisis with the flick of his pen, and he needs to do so now.

1) You punted on imm reform when you helped lead the majority.

2) Yes, Trump should rescind the policy, but that’d default to a still-broken status quo.

3) Your branch’s job is to legislate.

4) Will you filibuster GOP bills to alleviate this crisis & fix underlying causes? https://t.co/MrcJMWDoUw

Point by point: (1) Democrats have gotten a lot of political mileage out of fulminating on guns and immigration, each of which they conspicuously avoided when they held large Senate majorities.  The party's second-in-command and senior strategist during that time was none other than Chuck Schumer.  (2) I'll circle back to this one.  (3) Democrats and liberals spent quite a lot of time in recent days angrily screaming about Republicans' supposed 'refusal' to act to stop President Trump's zero tolerance policy.  Words aren't enough, they seethed; how dare you celebrate Father's Day while doing nothing to prevent babies from being ripped away from their fathers?  Many of these attacks were unhinged and unfair to begin with, but they look even more like bad-faith demagoguery in light of the same objectors' immediate rejection of...concrete Republican action to stop family separation.  Such efforts are now denounced as "hostage taking" and "ransom seeking" because some of the proposals include provisions on other immigration-related matters (I believe a more holistic approach to various challenges should have a better chance of passing, but Washington's dysfunction feels pretty hopeless at the moment).

But a number of the Republican plans are stand-alone, "clean" bills, including Ted Cruz's generally good idea (which needs amending), and a forthcoming offer from Senate GOP leadership.  Mitch McConnell has said that every member of his conference supports legislation to end and fix family separation and its root causes. Which raises the question: (4) Will Chuck Schumer attempt to filibuster any or all of these bills?  He should be pressed on this point, as should his members.  I'd bet they lack the numbers and the will to sustain such a mind-bogglingly obstinate maneuver, especially on the stand-alones.  If whatever might pass the House cannot get to 50 votes in the Senate (I'll reiterate that an amended House compromise bill seems totally reasonable to me), the upper chamber should pass (perhaps pre-emptively) one of their own bills, then kick it down to the House, where I'd be willing to bet a clear bipartisan majority of members would be on board (UPDATE II: It looks like a narrowly-tailored family separation bill will emerge from the House this week, with the president's support).

Back to the second bullet point: Schumer asserts that Trump could "end this crisis" with his pen and phone.  To some extent, this is true.  Trump could stop or pause the zero tolerance enforcement regime his administration has imposed regarding illegal border crossers -- which, in turn, would greatly reduce family separations.  But the notion that reverting back to the previous status quo actually solves or fixes anything is deeply misplaced.  Under the previous model, "catch and release" became a popular method of entering the US illegally, then evading our immigration laws while remaining inside the country.  I'll once again quote from Ben Sasse's strong post on this matter:

Under catch-and-release, if someone made it to the border and claimed asylum (whether true or not, and most of the time it wasn’t true), they were released into the U.S. until a future hearing date. Many folks obviously don’t show up at these hearings, so this became a new pathway into the U.S. Catch-and-release – combined with inefficient deportation and other ineffective policies – created a magnet whereby lots of people came to the border who were not actually asylum-seekers. This magnet not only attracted illegal immigrants generally, but also produced an uptick in human trafficking across our border.

'Catch and release' not only made a mockery of our laws, it empowered human traffickers. Returning to it as our de facto national policy is not acceptable.  That's why legislative action is not just possible but necessary; even if Trump caves on his wildly unpopular policy, going back to the same old system would be gravely irresponsible governance.  A replacement policy should keep families together in detention, expedite asylum claims and deportations to the greatest (realistic) extent possible, and end catch and release.  Do Democrats want to end catch and release, yes or no?  Do some of them want border enforcement at all?  Take a look at these tweets from a leading liberal commentator and a Democratic Congressional candidate:

A crucial point I can’t emphasize enough. With few exceptions, very few, there is no public safety reason to detain any of these people. Not the dads, or the moms or kids.

Donna Shalala has had her chance, it's time for new voices, new leadership, and new energy in Washington. As your Congressman, I'll fight to shut ICE down. It's time for a new day. pic.twitter.com/1kHLJ211iB

Let's "protect our borders," but let's "close ICE down"?  That's radical, incoherent stuff.  And to Hayes' point, even if you grant that the large majority of illegal immigrants don't pose a security risk, what about those who do?  There isn't a magic system for discerning who's a danger and who's not.  And isn't there an inherent national sovereignty reason to detain illegal border crossers?  If we don't, we don't really have a border.  Would that outcome be welcome?

Parting thought: The current crisis, and the unaccompanied minors crisis, and the DREAMer issue were all caused by, or heavily linked to, insufficient border security.  How on earth is enhanced border security considered a "poison pill" or "ransom demand" as we fashion new laws?  Unless, as I say, continued illegal immigration is seen as an acceptable, or even desirable, result by a growing faction of the Left.  It seems like more and more people are willing to say as much out loud.  Every Democratic official and candidate should be asked whether they agree -- and if not, what they're prepared to do to actually prove it.

UPDATE - This looks like a partial climb-down.  It also underscores the importance of a more permanent legislative fix:

EXCLUSIVE: @realDonaldTrump considering some sort of executive action today to allow children to stay with detained parents through immigration adjudication process. Sources say Admin believes it is likely to draw a court challenge on the basis of Flores v Reno

Also, here's Ryan from earlier, on the stand-alone family separation bill -- and another observation from yours truly:

NEW: Speaker Ryan says House will vote tomorrow on legislation keeping families apprehended at the U.S.-Mexico border together throughout their legal proceedings.

"The administration says it wants Congress to act, and we are." https://t.co/IJrWwlNI2z pic.twitter.com/j3tayz0Hpz

That the admin rolled out its 0 tolerance policy *w/o* these measures in place (which Trump may now temporarily implement via exec order) = political & moral malpractice. "Deterrence" gambit failed badly in every way. Its architects' judgment should be evaluated accordingly.