Meanwhile, the Economy Keeps Crushing It -- And Shows Signs of Further Improvement 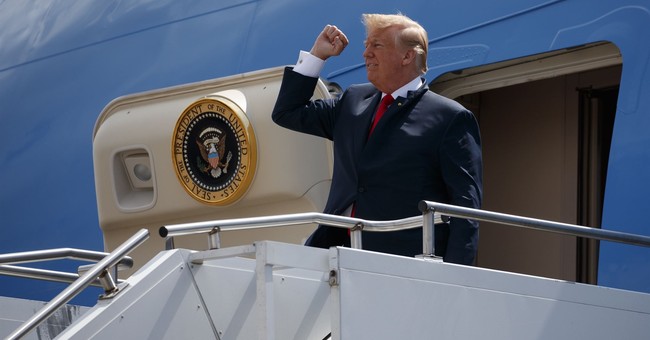 With Washington consumed by the border controversy, the robust and growing US economy has again been thrust onto the back burner of political discussion.  Its progress is undeniable and unambiguously positive, no matter how hard certain people try to downplay the good news.  Among the latest improvements being measured by various metrics is a clear uptick in economic confidence among lower income Americans, a demographic Republican policies are said to ignore, leave behind, or hurt.  The Wall Street Journal reports:

Economic confidence among lower-income Americans has taken a recent leap, the latest evidence that benefits of the economic expansion are reaching a broader swath of workers. Sentiment among lower-income consumers still trails that of their higher-earning counterparts. But the gap has narrowed in recent months. In the University of Michigan’s consumer-sentiment index, confidence among households in the bottom third income tier has risen 11.4 points since February, an IHS Markit analysis of sentiment figures shows. Meanwhile, sentiment among Americans in the highest third of incomes has fallen more than eight points...The recent improvement in confidence for lower-income Americans coincides with a falling unemployment rate and faster wage growth for workers at the margin. Among those experiencing labor-market gains are the less-educated and African-Americans...

Polls, statistical analyses and indexes are one thing, but here's how this sort of optimism looks and feels for real people:

Toncé Jackson-Ayanleye, 47 years old, is feeling increasingly positive about her job and income. She worked in positions making about $10 an hour before she graduated from a manufacturing career-training program and landed a job as a welder at Freedman Seating Co. in Chicago last spring. Ms. Jackson-Ayanleye’s income rose 50%. “I’m making far more money than I have ever made with any job,” said Ms. Jackson-Ayanleye. “What the future holds, I really can’t say. I just want to be prepared and ready for whatever comes my way. The sky’s the limit.” Witnessing other Americans finding jobs, as well as receiving increased skills training and access to services like child care, is helping boost sentiment among lower-income Americans, said Maurice Jones, chief executive at Local Initiatives Support Corp., which focuses on community development. “What folks are seeing around them are companies hiring,” Mr. Jones said. “That gives people some confidence and optimism about their chances of either getting a full-time job if they’re working part time or a job with higher wages if they’re looking for that or a first-time job.”

Meanwhile, there are more jobs than people looking for work, "something the American economy has never experienced before," CNBC reports.  And last month, US wage growth hit its strongest clip since the Great Recession.  As Matt mentioned earlier in the week, Gallup has pegged overall satisfaction with the direction of the country at a 12-year high, fueled in large measure by the economic hopefulness and success we've been tracking for months.  Nevertheless, a few red flags are flapping for the GOP.  As I mentioned last week, a recent Fox News poll found strong numbers on the economy and decent numbers for Trump, yet Republicans had slipped into dangerous territory on the generic Congressional ballot within the same data set.  A really good economy may not sufficient to beat back a blue wave, it seems.  That's especially true if people are ambivalent or unsure about where the credit is due.  We've seen voters increasingly attributing the gains to the president and his party, but a fresh Monmouth survey shows support for tax reform -- the linchpin of this high-octane recovery -- slipping:

Notice that disapproval fell, too, with the biggest movement coming in the "no opinion" category.  It is imperative that Republicans constantly connect the dots for voters -- across all methods of top line messaging.   This good news is not accidental.  One elected official who's been very faithful about this is Senate Majority Leader Mitch McConnell, who routinely gives floor speeches highlighting new developments.  His style isn't flashy, and C-SPAN doesn't bring in big ratings, but this is the relentless approach that the whole party must embrace:

"On the heels of this data we now estimate real GDP is expanding at a 4.0% annual rate in Q2, up from our prior estimate of 2.75% and almost twice the 2.2% growth rate experienced in Q1." - JPMorgan

The Atlanta Fed's rosy outlook on GDP growth was seen by many as an outlier.  Maybe not so much anymore? Oh, and more more thought:

BREAKING NEWS: 95.1% of manufacturers are optimistic about the future according to our latest survey, the highest level ever recorded in the survey’s 20-year history. https://t.co/7RGjFLzZvD pic.twitter.com/LFsDyLzdNX