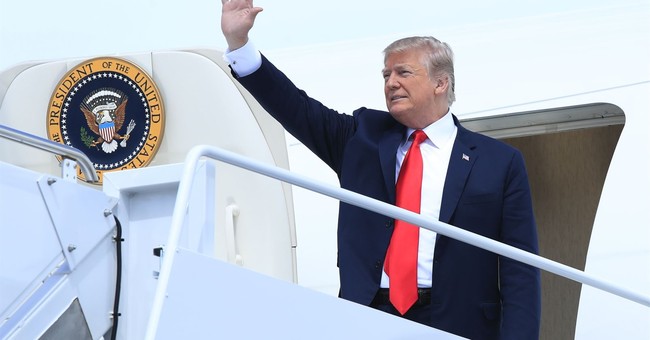 As political analysts ponder the status of that proverbial blue wave, many have wondered whether the strong US economy will act as a mitigating factor, blunting expected GOP losses and enabling the in-power party to maintain its majority in at least one house of Congress.  Quite a lot of data suggests that Republicans are cruising for a bruising in November, but as we've explored, there are meaningful countervailing clues, too.  To the latter point, this is a very interesting finding in the latest CNN poll:

The last two times the House changed party control, Americans' take on the direction of the country was worse than the numbers in the latest CNN poll:

Things Are Going Well
In the U.S. Today

Remember, 2006 was a bad year for Republicans, as a moderate-sized blue wave washed away their majorities.  But 2010 was a truly disastrous year for Democrats, as a red tsunami wiped out 63 House seats in one fell swoop.  Not only were President Obama's policies deeply unpopular at the time, just over one-fourth of the electorate believed things were "going well" in the country that year.  The conventional wisdom holds that 2018 is shaping up to be a reverse 2010; that's entirely possible, but numbers like the one featured in the tweet above complicate that narrative.  Today's level of overall public satisfaction isn't just marginally better than it was eight years ago; it's more than twice as strong.  It's difficult to dismiss those sentiments as technicalities or minor footnotes (this reminds me of a Democratic pollster calling the economic and jobs numbers "distractions").  Allahpundit elaborates: "To give you a sense of how rare that air is, you need to go all the way back to late July 2005 to find a higher number (58 percent) in a CNN poll. Since then America has endured Hurricane Katrina, the deterioration of Iraq, and the financial crisis and loooong recovery. That’s a lot of rain to have sit through while waiting for some sun," he writes.

That's all true, but here's a small counterpoint: The last time a CNN poll pegged public happiness with the status quo in America at 57 percent was back in 2007.  That was eleven years ago, when George W. Bush was president.  And what happened the very next year?  Voters delivered a huge repudiation of the White House incumbent, resulting in a large Democratic House majority, a roughly filibuster-proof Democratic majority in the Senate, and of course the election of Barack Obama.  Widespread satisfaction did not translate into good news for Republicans that cycle.  A counter-counter-point: The economy collapsed in late 2008, coinciding with the election's home stretch.  Most people (largely unfairly) blamed Bush.  Those 2007 warm fuzzies had long since expired by the time Americans stepped into voting booths the following year.  Anyway, back to the present.  What explains the canyon separating the significant majority who are pleased overall with the state of play in the country from the president's upside-down job approval rating?  AP thinks this chart -- asking those who disapprove of Trump's performance why they disapprove -- tells the story:

A majority of the disapprovers can't stand the guy personally; his policies are a secondary consideration.  That doesn't mean that people in that latter category can't appreciate the positive results of some of those policies.  Meanwhile, after languishing in the 30's in many polls over the span of months, the president's job approval has settled in the mid-40's lately -- and the average approve/disapprove gap has shrunk to single digits.  Nobody's saying that's anything to brag about, but it's a marked improvement over recent doldrums.  And importantly, the CNN survey also measures a ten-point majority giving a thumbs-up to Trump's handling of the economy (52/42), which is consistently the top issue on voters' minds.  On that score, I'll leave you with Republicans' favorite bogeywoman doubling down on her vow to repeal the GOP tax cuts, which are offering relief to 90 percent of American families, improving the economy, creating jobs, and making US businesses more competitive:

A majority of Americans (a) are pleased with the country's big-picture trajectory and (b) favor Trump's economic performance -- yet Pelosi is pledging to waltz in and disrupt that progress with anti-growth tax increases.  She wants to turn back the clock at the exact moment citizens' optimism is surging to a multiyear high.  Blind resistance is a risky scheme.  "Cocaine" Mitch McConnell keeps beating this drum, and other Republicans must do the same:

UPDATE - This new report points to evidence that the strong US labor market still has more room to grow, which suggests that the expansion isn't over.