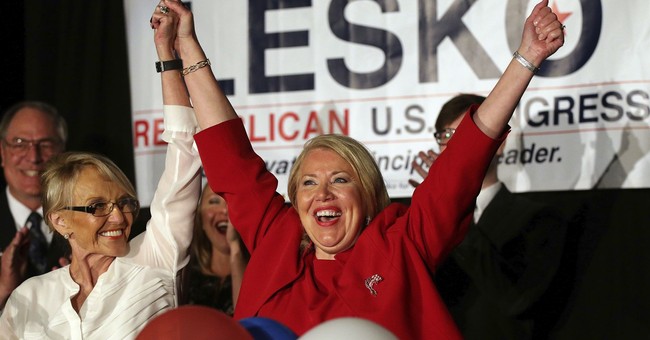 Well, CNN has a point here.  On the surface, Republicans held a House seat in Arizona last night, winning a special election to fill the seat vacated by a former Congressman who resigned under strange circumstances.  This was a red district in a red state, and Democrats put up a relatively weak and inexperienced nominee who held far-left views on issues like healthcare and abortion.  The GOP and aligned groups dropped roughly a million dollars in insurance money to deny Democrats another momentum-building upset in Trump country, while the opposition spent very few resources.  So on paper, this was an easy win.  When the votes were tallied, it was a win -- and that's what ultimately counts -- but the nature of that victory isn't likely to reassure anxious Republicans.

The victor, conservative Debbie Lesko, prevailed by less than six percentage points in a district Trump carried by 21 points in 2016.  That same year, the now-departed House incumbent won with nearly 69 percent of the vote, and the Democrats didn't even field a candidate (a member of the Green Party got crushed instead).  That's quite a swing -- and it's one that reflects the double-digit shift toward Democrats we've been tracking in off-year and special elections since last year.  Usually, the losing team's excuses and spin ring hollow the morning after a defeat.  But there's more than a little bit of truth to the Left's narrative today:

GOP groups poured in well over $1M to hang onto a House seat Trump won by 20+ in Ariz. Ds spent nothing. The intensity gap is undeniable. https://t.co/DjLPsjFLbh

There just aren't any excuses. The Republican wasn't Roy Moore. The Democrat wasn't Conor Lamb. The turnout wasn't low. The district doesn't have, say, a latent Democratic tradition. It oddly has the effect of making all the prior excuses seem less relevant, too.

And with Republicans defending an open Senate seat in Arizona this year (and, God forbid, possibly two), these facts from last night aren't terribly reassuring either:

I realize these are uncomfortable things for conservatives to read, but burying our heads in the sand won't make the truth go away.  Remember, these aren't just polls (plus, "the polls were wrong in 2016!" is only partially true).  These are results.  And as we highlighted yesterday, when a president's "deserves re-election" standing is hovering in the high 30's, bad things happen to his party in the subsequent midterm cycle.  The data shows that the GOP has bled support in every single federal special election since Trump became president.  Barring an unforeseen change in the political winds, it's looking like triage will be the name of the game for Republicans this fall.  By the way, the too-close-for-comfort outcome in Arizona wasn't the only concerning result from yesterday's special elections:

With all precincts reporting, Steve Stern (D) has bested Janet Smitelli (R) for a Suffolk County #nyassembly seat. Has been in GOP hands since 1978.

This the stuff waves are made of.  To repeat: We're not cherry-picking wavey data points.  Virtually all of the relevant data points look wavey, even the "good" ones.  We've written up a few surveys lately that have shown the president's approval ticking up and Republicans gaining on Democrats on the generic ballot -- but a handful of new polls out today show a comfortable Democratic lead:

That closely mirrors new findings from Politico/YouGov, which puts the national ballot at D+9.    I'll leave you with another nugget from that survey, pertaining to the post-passage battle over tax reform:

Politico poll (generally ugly for Trump/GOP) shows a plurality in favor of #TaxReform (44/39), despite most saying they haven’t noticed their beefed up paychecks. R’s must focus on improving awareness on that latter point.