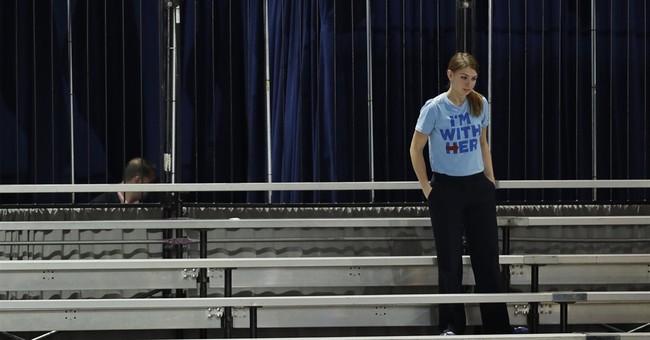 Eh, it's just one polling series -- but it's an intriguing one, tracking data over two years.  With President Trump's job approval ticking up a few more points lately (it's better, but still not good, especially considering this electoral context), might young voters' acute allergy to the Republican Party and its current leader be subsiding a bit?  Perhaps.  Here is what Reuters/Ipsos' latest survey found, followed by a some further analysis:

In the last two years, Millennial support for Democrats over Republicans on the generic congressional ballot dropped around 9 percentage points, to 46 percent. The demographic’s support for Republicans has remained steady at about 28 percent. (The remaining 26 percent comprised respondents who said they don’t know or support a third party.) Even though close to two out of three millennial voters say they do not care for President Trump, that does not necessarily help Democrats, according to the poll, which surveyed 65,000 people including 16,000 registered voters ages 18 to 34. Some Millennials who voted for Hillary Clinton in 2016 are now looking at supporting GOP congressional candidates, the poll found. And the same young voters are almost evenly split on the question of which party takes better care of the economy, with 34 percent favoring Democrats compared to 32 percent favoring Republicans — a twelve-point jump for the GOP since 2016. White Millennials have turned toward Republicans the most. Support for both parties among young white voters is equal at 39 percent. This marks a big shift from 2016, when white Millennials supported Democrats over Republicans 47 percent to 33 percent.

Democrats still enjoy an 18-point advantage over the GOP among this demographic, fueled by lopsided numbers among young voters of color, so conservatives may want to tone down the virtual high-fiving over these numbers.  Serious, systemic challenges remain.  But the double-digit swing on the economy is a particularly interesting data point, I think.  The US economy is thriving, and Republicans are in charge.  That hasn't gone unnoticed by a cohort of voters that isn't inclined to view the party favorably.  The results of tax reform and deregulation are speaking for themselves, and people are taking note.  How's this for a pull quote?

Not everyone is turning up their noses at their "crumbs" (i.e., "the small things"), which include more readily-available jobs and boosted take-home pay.  I remain dubious about a lasting sea change among young people in the GOP's favor, but what the Reuters data reminds us is that political coalitions are not forever static and predictable.  National Review's Charles Cooke explores this dynamic a bit further here:

This, I think, is interesting. Not because it suggests that the GOP is in for a glorious mid-term season. It’s not. And not because it provides a good reason for the GOP to wave away its problems with the young; per the same poll, just 28 percent of Millennials back the GOP. Rather, it’s interesting because it demonstrates that our politics remains as fluid as ever...In [their] view, all progressives have to do in order to take and keep power is wait for their opponents to die. In this view, conservatism is the philosophy of the old and the white and the male, and, as America becomes more brown and the elderly slowly disappear, so too will their creed. Young people tend to be Democrats, and so do non-whites. Before long, then, a supermajority is surely inevitable...The problem with this view is obvious: Namely, that both people and circumstances change.

This concept is all too often lost on the political press, which has a terrible habit of assuming that what is true now will be true forever more. In 2004, Bush’s winning strategy was destined to marginalize the Democrats for a generation. That, quite obviously, didn’t happen. In 2008, Barack Obama’s massive victory spelled the end of the GOP and the death of conservatism. That didn’t happen either. And why would it? Just four years elapsed between Goldwater’s blowout loss and Nixon’s winning the White House in ’68. There were only six years between Watergate and Reagan’s first victory. Just two years sat between the financial meltdown of 2008 and 2010’s blowout GOP mid-term victory. Memories are short, and politics are dynamic, and voters don’t care about your theories. In 2014, Millennials shifted away from the Democrats. In 2016, they went back. Now, they’re losing interest again.

Cooke concludes by tying this misplaced, destiny-driven analysis back to an issue about which he's especially passionate -- gun rights. It turns out that older partisans are urging their opponents to heed young Americans' advice on gun control without bothering to confirm whether the data reinforces what they think Millennials believe: "After the Parkland shooting, the mainstream press simply took it as a given that the young people they saw at the gun-control marches were representative of their contemporaries as a whole. CNN proclaimed a 'revolution!' Gun-control groups promised generational salvation. 'The kids are alright,' said the believers. Polling, though, showed a different story. In fact, young Americans are not any more strongly in favor of gun control than are older voters — and in some cases, such as on the question of whether to ban so-called 'assault weapons,' they are less so. In March, Dianne Feinstein wrote a Medium post imploring America to 'Listen to Young People, Ban Assault Weapons,' even as polling showed that young people were the cohort least likely to support such a proposal. Why, one wonders, did she not know that?"  Because she didn't bother to check if David Hogg's posse actually represents mainstream thought about younger generations of voters.  That wishcasting was, as they say, too good to check.