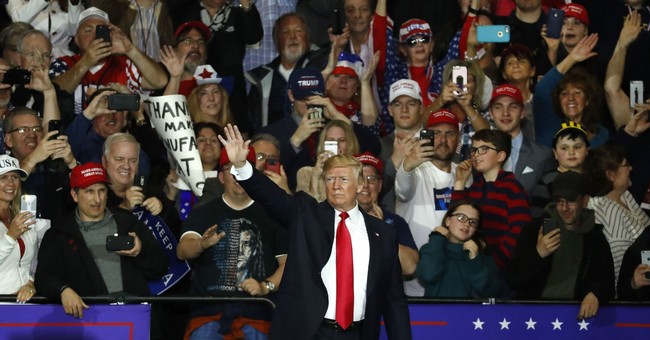 Last week, we analyzed President Trump's assignment of an A-plus grade to his presidency thus far -- noting some of his policy achievements, while pointing out a number of reasons why his approval rating does not reflect his generous self-assessment. As an election-era 'Never Trumper,' which I've explained in detail here, I believe that the most responsible way for me to judge his presidency is on a fair-minded, piecemeal basis.  When he's wrong or reckless, I say so.  When he's doing well, I say so.  I see no point or value in sticking to a single narrative by pretending that his good actions somehow aren't praiseworthy, or that his defects don't exist.  Some Trump-skeptical conservatives seem so invested in criticizing him that they're either blinded to some of the huge accomplishments playing out before their eyes, or they're allowing the other drama -- both legitimate and exaggerated -- to drown out the wins.  This is a mistake.  For all his manifest character flaws, ideological heresies and frustrating indiscipline, President Trump is in the process of notching a series of substantial victories for the conservative movement and for America.  Within the last few days, we've seen the fruits of those efforts on three crucial fronts.  (1) The US economy is strong and growing. From Friday:

The U.S. economy slowed in the first quarter as consumer spending grew at its weakest pace in nearly five years, but the setback is likely temporary against the backdrop of a tightening labor market and large fiscal stimulus. Gross domestic product increased at a 2.3 percent annual rate, the Commerce Department said in its snapshot of first-quarter GDP on Friday, also held back by a moderation in business spending on equipment and investment in home building. The economy grew at a 2.9 percent pace in the fourth quarter. Economists polled by Reuters had forecast output rising at a 2.0 percent rate in the January-March period. The first-quarter growth pace is, however, probably not a true reflection of the economy, despite the weakness in consumer spending. First-quarter GDP tends to be sluggish because of a seasonal quirk. The labor market is near full employment and both business and consumer confidence are strong.

In addition to increased evidence of wage growth, here's the economy's overall trajectory:

Tax reform is working, the employment picture is robust, and job creators are feeling upbeat and optimistic.  These are real, tangible victories for the American people.

(2) A stunning foreign policy breakthrough has changed the game on the Korean peninsula. After years of predictable US "stability," which the regime in Pyongyang exploited, an unpredictable but attentive American president has shifted the calculus.  All of the cautionary caveats apply to the new developments: The North Koreans cannot be trusted, they've played these games before, everything could fall still apart, and they may be setting up the South Koreans.  Blind optimism would be ahistorical and stupid in this context, but this strikes me as right: "At this point, what’s the alternative? Ten years ago, five years ago, we could have concocted an argument that only resolute isolation of North Korea had a chance of disarming them by bringing them to their knees economically. Maybe we could starve them into denuclearization, as harsh as that sounds. But to all appearances, it’s too late now. They have the bomb and they’ll very shortly be able to deliver it to the mainland United States. If we’re not game to fight Korean War II, and I don’t think we are, then all diplomatic options are necessarily on the table."  New pressure points, American leadership, and uncertainty about Trump's designs were major contributors to this historic moment:

The handshake that made history. pic.twitter.com/JB09Ce9mHt

Some international affairs experts who are decidedly not inclined to praise this president are openly conceding that his much-pilloried tactics have paid startling and striking dividends:

I’ve been critical of Trump foreign policy missteps in past year: TPP, Paris, too many unnecessary missteps with allies to count.

But today’s historic North/South Korea breakthrough does not happen without priority & pressure from US President.

I am jaded about most gestures in international relations.

But this is as close to an “unbelievable” moment as I can remember.

Let's get real. The press would be
in the midst of a collective orgasm if this Korea summit happened under Obama's watch. So let's call the meeting what it is... an unalloyed good thing.

There's already non-frivolous chatter about a Nobel Peace Prize, of which Trump is arguably already more deserving than the basically-symbolic award foolishly bestowed upon his predecessor.  Speaking of Trump's predecessor and Team Smart Power, will this man ever tire of being embarrassingly wrong?

(3) And oh-by-the-way, the president is making good on a critical and lasting legacy promise that is quite possibly the primary reason he won the election, winning over enough dubious conservatives who were swayed by the significance of the federal judiciary:

Trump has confirmed 15 circuit court judges — more than the last five presidents at this stage. Eight are in their 40s; seven in their 50s.

It's true that this confirmation bonanza is only possible thanks to Harry Reid and the Democrats' Obama-era overreach, but Trump's White House deserves credit for prioritizing this issue -- as does Mitch McConnell.  Republican voters should similarly have their collective eye on the ball: Continuing this string of confirmations is one of the most pressing reasons to keep the US Senate in GOP hands following the midterms.

Share this on Facebook
Tweet
GOP Vows to Investigate Biden Family If They Win the House
Sarah Arnold
Attacks Against Pregnancy Centers Continue, This Time From Media and Pro-Abortion Politicians