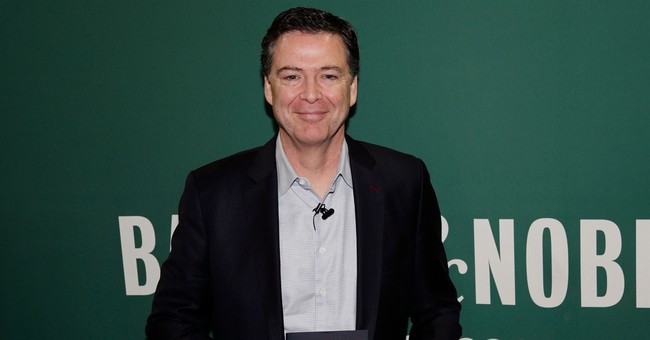 Rove is reviled by many Trump loyalists as a squishy, Bush-ite establishment type these days; I know him a bit and think that's an unfair caricature, but it's how a large segment of the GOP base now thinks.  It's therefore notable that Rove is unsparingly unloading on fired FBI Director James Comey, whose book tour has become a lightning rod of criticism from both sides of the aisle.  In a new Wall Street Journal column, Rove rips Comey's methods, motivations, and credibility -- citing two long-elapsed, Bush-era incidents over which Rove is still steaming:

Behind the aw-shucks, I-was-the-only-honest-man-in-the-room persona, Mr. Comey’s book demonstrates his real higher loyalty is to self-aggrandizement. Consider two episodes from George W. Bush’s presidency. Mr. Comey writes that in 2003 he was drawn into the Valerie Plame investigation when administration officials leaked the identity of “a covert CIA employee,” allegedly as retaliation for a critical op-ed written by Ms. Plame’s husband. Mr. Comey, then deputy attorney general, appointed special counsel Patrick Fitzgerald, and writes that he stands by the decision to charge Vice President Dick Cheney’s chief of staff, I. Lewis “Scooter” Libby, with false statements, perjury, and obstruction of justice. Mr. Libby was convicted in 2007.

But vital facts are missing from Mr. Comey’s account. The most important is that no one revealed a covert CIA agent’s name. Though Mr. Comey refers to Ms. Plame seven times as a “covert agent,” she was not. That’s why Deputy Secretary of State Richard Armitage, who revealed Ms. Plame’s name to columnist Robert Novak, was never indicted. Mr. Comey also fails to note that the star witness against Mr. Libby, former New York Times reporter Judith Miller, recanted her testimony in 2015. She said Mr. Fitzgerald misled her and withheld exculpatory evidence that would have kept her from “unwittingly giving false testimony.” In a rebuke to Messrs. Fitzgerald and Comey, the District of Columbia Court of Appeals cleared Mr. Libby to practice law again in 2016, well before President Trump pardoned him earlier this month.

Click through for the other example, which focuses on a hotly-disputed 2004 episode that occurred at the hospital bedside of then-ailing Attorney General John Ashcroft.  Rove concludes, "'A Higher Loyalty' leaves the impression no one has a higher opinion of James Comey than himself. How difficult to be a white knight in a fallen world!"  I'm not sure many people will argue with the point about Comey's self-righteousness, including Comey himself.  Another interesting development as Comey made the rounds was Anderson Cooper's grilling the ex-FBI chief over his leaking during a CNN town hall forum.  When pressed on the subject, Comey offered some tortured -- one might even say Clintonian -- parsing:

If an FBI deputy circulated an unclassified memo he’d written about a private conversation with the president, surely he’d catch hell from the Bureau for it, Cooper suggests. Yeah, well, I wasn’t a Bureau employee when I shared the memos, says Comey. I was a private citizen. Which is a pitiful answer from Cooper’s perspective, whatever its legal salience in protecting Comey from prosecution. It reeks of vindictiveness. If there was a public interest in keeping the memos secret the day before Comey was fired, why didn’t that public interest matter the day after he was fired? Comey’s spent the last two weeks lecturing America about the momentous importance of civic virtue. It’s hard to understand why his civic duty to share the troubling things Trump said to him in confidence as FBI director didn’t kick in until he was no longer collecting a federal paycheck.

It's been a fairly bumpy ride so far for the Comey Show, and it's not over.  While we're at it, I'd still like to see Comey really pressed on this theory at some point.  One thing you can't take away from ole' Jim is that his book tour has been very effective.  Early anecdotal stories about underwhelming sales were...quickly disproven by the numbers.  This thing has been a mega-hit:

Former F.B.I. director James Comey’s book, “A Higher Loyalty: Truth, Lies, and Leadership,” has dominated headlines for more than a week, and became an instant blockbuster, selling more than 600,000 copies in all formats during its first week on sale. Mr. Comey’s publisher, Flatiron Books, has ordered multiple reprints to meet demand, and now has more than a million copies in print.The early sales figures for Mr. Comey’s book dwarfed other recent political best sellers. Hillary Clinton’s memoir, “What Happened,” sold more than 300,000 copies in all formats in its first week on sale. And “Fire and Fury,” Michael Wolff’s explosive look inside the Trump White House, sold around 200,000 hardcover copies in its first full week on sale...