Analysis: Trump's VA Nominee is in Trouble. Are the Attacks Against Him Fair? 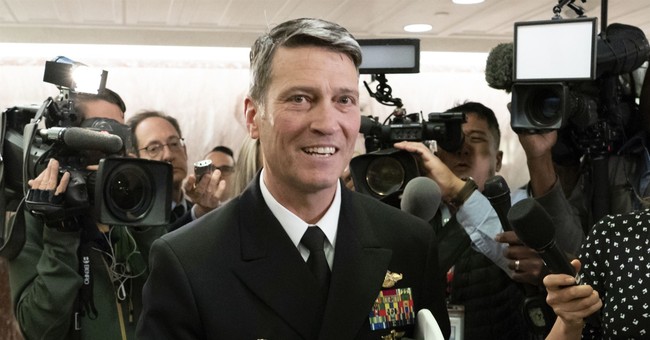 The nomination of President Trump's pick to take over the scandal-plagued Department of Veterans Affairs is facing intense adversity this week, with Senators questioning his qualifications for the job and demanding answers on allegations of professional and personal misconduct.  Rear Admiral Ronny Jackson is a decorated Iraq War veteran and has treated the last three presidents as a White House physician.  In that capacity, Jackson won praise and affection from members of three presidential teams; he was repeatedly lauded and promoted by President Obama, members of whose administration rushed to Jackson's defense several months ago when some in the media questioned his physical health assessment of President Trump.  Among the newly-leveled claims against Jackson are drunkenness while on duty, over-prescribing sleeping pills, and fostering a hostile work environment.

One Democratic Senator says that roughly 20 witnesses have backed up pieces of the accusations, one of which entails Jackson allegedly knocking loudly on the hotel door of a female colleague while intoxicated late at night.  Jackson "vehemently" denies wrongdoing.  For his part, the president has stood by his nominee and criticized Democratic obstructionism.  But he also tossed Jackson what many people interpreted as a face-saving lifeline, stating that if he were in Jackson's position, he'd decline the job and sidestep politicians' "ugly" and "disgusting" feeding frenzy.  As these matters are sorted out, Jackson's scheduled confirmation hearing has been postponed, amid concerns and criticisms from a bipartisan group of Senators.  I discussed the controversy on America's Newsroom this morning:

My main points are as follows: (1) This man has served three presidents honorably and ably, earning affection and support from both sides of the aisle.  While it's important to review the claims against him with an open mind, it will take a lot to convince me that Jackson (who was vetted by the FBI) was personally fit to serve as the president's personal doctor, yet is not personally fit to run the VA.  On that point, a number of people from the Trump and Obama administrations have pushed back against the accusations:

"It was absolutely unfair for [Senator Jon Tester] to drop the 'candy man' line. I think that there have been multiple — every year they come in and they do a review of the White House physician's office on things like prescriptions and every year they said that he's totally in compliance with what he's been prescribing,” Short told reporters...Shah, meanwhile, seized on comments from Brian McKeon, chief of staff for Obama’s National Security Council, in which he told The New York Times about Jackson, “I am not even sure that I ever saw him in a hotel bar.” “Obama NSC official can't recall anything to substantiate an accusation against Dr. Jackson,” Shah tweeted. McKeon on his own Twitter page, wrote a fuller defense of Jackson: “To be fair to Dr. Jackson, these are allegations. I traveled regularly with Pres Obama while I was CoS at the NSC; so did Dr. Jackson. The allegations I've read about this morning don't ring true.”

(2) Barring clear substantiation of the charges, it seems to me that the fairer line of questioning involves whether Jackson has what it takes to run a massive, troubled bureaucracy. Being an excellent and beloved military doctor does not necessarily require the same skillset as what's needed at the VA: A clear-eyed manager who specializes in turnaround projects and accountability. I have no idea whether Jackson is capable of being effective in this role, and I think it would be entirely fair for Senators to ask rigorous questions to that effect during a hearing.  Just because he's a well-liked doctor with military credentials who's in Trump's orbit doesn't render him qualified for the mammoth task at hand.  The opposite is also true: Just because he's in Trump's circle and doesn't have management credentials doesn't mean that he couldn't succeed either.  But arriving at such determinations is the point of the confirmation process.  Our veterans deserve much better than they're getting with this sprawling and profoundly flawed leviathan.  The VA's next leader cannot be a tentative caretaker; he or she must be a fearless reformer.

(3) Trump's blast at Democrats' obstructionism, fired in Jackson's defense, is a legitimate one.  Senate Democrats have undertaken an project of extraordinary uncooperativeness regarding a wide array of Trump nominees.  They've done so having already torched their strongest tool to block the most objectionable picks -- a casualty of their own past unprecedented and unilateral escalations.  When Chuck Schumer and company complain and fret about everyone and everything, it's hard to take them seriously even when important or worrisome questions need to be asked.  For instance, perhaps some Jackson skeptics would have more credibility if they hadn't just made a big show out of trying to block West Point grad, former Congressman and ex-CIA chief Mike Pompeo's confirmation as Secretary of State.  Their complaints against him included domestic policy disagreements over social hot buttons like abortion and gay marriage.  Rather than picking their battles wisely and specifically, many Democrats are in a contest to out-'resist' each other, some with an eye toward 2020.