Fox Bosses: No, Leftists, We're Not Caving to Your Boycott Mob 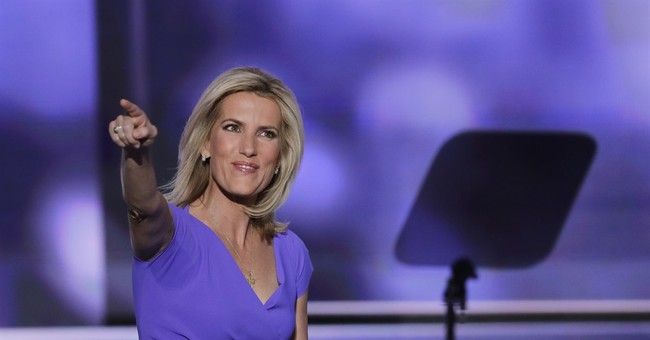 Cortney mentioned this last night, but I wanted to expand on her post because I've wrote about the underlying issue at length -- both in this post, and in my book.  Before I go any further, let me again disclose that I'm a Fox News Contributor.  But I can say with strong confidence that I'd be making the exact same argument if I didn't work for the network.  Amid the departure of more than a dozen advertisers from Laura Ingraham's primetime program, the top brass at Fox released a statement to the Los Angeles Times, standing behind their embattled host:

"We cannot and will not allow voices to be censored by agenda-driven intimidation efforts," Jack Abernethy, co-president of Fox News, said in a statement to the Los Angeles Times. "We look forward to having Laura Ingraham back hosting her program next Monday when she returns from spring vacation with her children." Some advertisers have left the show since Thursday to protest Ingraham's remarks, while other sponsors have steered clear of her program so as not to be associated with the controversy. Although more than a dozen advertisers have stated publicly that they have pulled their commercials from "The Ingraham Angle," far more have stayed away without making any public announcements...One person familiar with the situation who was not authorized to publicly comment said the boycott has not yet resulted in a significant financial hit. This person said no advertisers have pulled their dollars from the network but have simply moved from "The Ingraham Angle" to other programs on the Fox News schedule.

Most of the advertisers are out because they want to avoid the controversy associated with the story and could revisit the situation in a few weeks after Ingraham returns. Abernethy's statement is meant to convey that Ingraham will return whether the advertisers come back or not. Fox News hired Ingraham to be a provocative commentator who appeals to conservative viewers, and if she is shut down by advertiser resistance its other hosts will become vulnerable. Ingraham took over the 10 p.m. Eastern slot on Fox News in October. Fox News executives will not comment beyond the statement, but privately they believe Ingraham's offense does not approach the issues that brought down hosts Bill O'Reilly or Glenn Beck, who both lost their shows after advertisers pulled out.

I already said my piece about Ingraham's mocking tweet -- yes, that's what it was -- and her decision to apologize for sending it (wrong and right, respectively), but Abernathy hits the nail on the head when he describes the David Hogg-spearheaded boycott as a choreographed censorship campaign featuring "agenda-driven intimidation efforts."  That's precisely what this whole push became the moment that Hogg rejected the apology and urged the hoards to double down.  You don't have to defend Ingraham's initial mistake -- or even enjoy Ingraham's views or style -- to recognize that reality.  As I also underscored in my Monday post, it's not just conservatives who've been creeped out by the purge-and-punish trend.  Two more items of note from the LA Times story: First, though some sponsors have walked away from Ingraham's show, the network hasn't lost them, meaning that the financial impact on Fox's overall bottom line has been modest.  And among the advertisers who've quietly stepped away from the Ingraham Angle, "most" are reportedly willing to return to the fold if and when this controversy blows over.

Second, Fox executives are making an important point (evidently without attribution) about proportionality: The most recent, and by far the most prominent, example of an advertiser exodus at the network came during the thick of the O'Reilly scandal.  Mainstream advertisers fled the 8pm ET hour in droves amid serious and credible sexual allegations against the former primetime mainstay.  Whatever you think of Ingraham, an ill-advised, apologized-for tweet does not even approach rising to that level.  My attitude on boycotts is that they should be mounted very sparingly, when alternatives are genuinely morally unacceptable (I also endorsed counter-boycotts and 'buycotts' as ways to pushback against excessive corporate bullying).  But as the saying goes, when all you have is a hammer, everything looks like a nail.  That's especially applicable to the 'End of Discussion' crowd.  Occasionally, the hammer-and-nails approach is appropriate; in many, many cases, it's not.  This is one of them.  I'll leave you with some good insights on David Hoggism from David French, who explores an important component of this saga that I didn't explicitly address in either of these posts:

There is not a single American corporation, media entity, or adult activist who actually takes direction from David Hogg or any other Parkland victim. Every single thing they do in response to Hogg’s public comments is done willingly — gleefully, even — because Hogg is their tool. He’s their sword and their shield. He is their excuse for doing exactly what they want to do. By now we know how this pitiful game works. Hogg, egged on by cheering adults, says vicious, cruel, and often false things about their political opponents, and they cheer all the louder. They love it. They quite obviously can’t get enough of it. In this way, Hogg is an expression of the liberal id...Hogg isn’t the bully here. His powerful adult allies are. They built this culture. This is the culture of the progressive corporate boardroom, the progressive academy, and all too many sectors of media and the arts. In this culture, Hogg is a weapon to wield so long as he’s useful. He’s the latest in a long line of victims/activists who spend their time as the “face” of an immense movement, pushed forward by the media until that moment when the news cycle moves on, other victims emerge, and other outrages inflame the masses.

French rightly admonishes conservatives against getting sucked into this ugly game without rules, concluding by relaying a difficult truth to the Parkland survivor activists on both ends of the political spectrum: "I hope someone is talking to these Parkland kids, telling them the cold, hard truth. The vast majority of their new friends love them because they are useful. If they deviate one inch from the tribal lines, they’ll quickly learn how scarce their true friends are. Teens are “powerful” only when they agree with powerful adults. This is an adult fight, and has been from the beginning."  Correct.  They're entitled to their opinions and to their activism -- and should be given the space to make their cases, even if they do so imperfectly or egregiously.  But none of us should be under any illusions about the bare-knuckled, and sometimes exploitive, dynamics at play here.