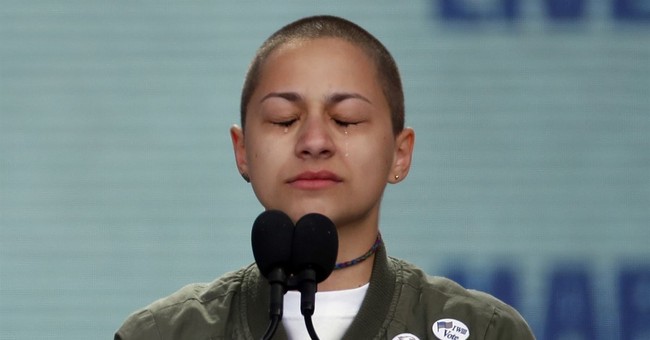 Even in our turbocharged political climate, it's important to respect boundaries and maintain a sense of propriety, even when 'the other side's' conduct and rhetoric may feel like an open invitation to escalate, in the name of "fighting back."  I have written on numerous occasions about the demagogic excesses and unfair smears of the anti-gun Left; as someone who is not personally invested in gun culture, I nonetheless care deeply about the constitution, and the descent of our national discourse into motive-impugning bloodsport is a trend that I very publicly abhor.  I believe that a number of the student activists whose voices have emerged from last month's mass shooting are counseled and incentivized to contribute to this poisonous atmosphere, choosing shrill, partisan invective over a more constructive and progress-oriented approach.  That's a shame.

When lines are crossed into nasty slander, or factually inaccurate information is disseminated, targets should not feel an obligation to politely smile in silence, for fear of "attacking" survivors.  If these teenagers choose to wield their new megaphones to influence the national conversation, challenging their ideas and methods is fair game.  Conversations are not real conversations if they only flow in one direction, after all. That said, conservatives who decide to push back against gun control advocates who are survivors or victims of life-shattering horrors should also exhibit restraint and open hearts while doing so. Grieving, traumatized people should be afforded a few extra dollops grace and leeway.  Teenagers should not be expected to be perfect, polished, media-trained adults.  High schoolers say and do stupid things sometimes, including things that they come to regret later in life.  Everyone should be able to relate to that universal truth.  Beyond normal high school drama and immaturity that can lead to mean-spiritedness, consider the effects of injecting a horrific massacre plus the alluring but unsparing glare of national media scrutiny into the equation.  It's a toxic recipe.

We should all bear these factors in mind as debate with or about the Parkland survivors.  Challenges and criticisms directed at them are not automatically beyond the pale, and shouldn't be reflexively characterized as "attacks."  But challengers and critics should tread relatively lightly and live out the Golden Rule -- which does not exhort people to treat others the way they themselves have been treated, but the way they'd like to be treated.  Beyond that, we must guard against, and reject, fake news and slanders targeting these kids and their families.  Over the past 24 hours, I received multiple notes on social media breathlessly directing me to report about two shocking developments -- first, a leaked image supposedly depicting one of the prominent student activists tearing apart a copy of the US constitution:

People are sharing a fake picture of Parkland shooting survivor Emma González ripping up the Constitution. The real photo is from a Teen Vogue photo shoot, where she tears apart a shooting target poster ??? pic.twitter.com/HXHG3dBdIm

Second, a CBS News video that ostensibly "proved" that another one has been lying all along about whether he was in school that day, echoing previous hoaxes about certain students being imported 'crisis actors' who didn't even attend Marjory Stoneman Douglas High School.  In truth, both of these 'developments' were soulless fabrications.  The image of the girl was a photoshopped and altered, and the boy in question did not "admit" that he was at home during the shooting spree -- but rather that he went home later, before returning to the scene with a camera to document the aftermath.  I get it: Many people rightly take profound umbrage at being accused of abetting child murder.  They are understandably resentful at the thought of under-informed or zealous, freshly-minted partisans pushing to limit their rights.  But none of those riled emotions justify taking cheap shots or uncritically indulging and sharing bogus "evidence" that conveniently confirms pre-existing biases.  Sometimes sharp disagreements are just that; not everything is a conspiracy.  The pathological urge to discredit opponents can occasionally lead otherwise rational people to let down their intellectual guard and buy into cartoonish, 'too-good-to-check' smears (we all do this sometimes, and I don't hold myself out as an unfailing paragon of rectitude).  On that point, there's a lot of wisdom in this single tweet:

My rule of thumb for Twitter in our current environment:

1) Don’t link to / aggregate domains or accounts you’ve never heard of before.

2) If the story confirms your priors too conveniently, hit the snooze button before sharing.

Staying on the subject of wise tweets, this thread is thoughtful:

So, I've been getting steam along the lines of "what would have the kids do?" I'll answer that. You won't like it, but there's an answer. Start with "get away from the national media." /1

Later, sit down with the adults in your family, your school, and your city. Talk to them. Ask them what they intend to do. Ask them, for example, how Cruz got his guns and evaded being locked up for so long. Demand to know the points of failure that got your friends killed. /3

You will learn something very important: change takes time, it takes drudgery, and it's boring. But when it pays off, it's lasting and it means something. What's happening right now will end and you will feel a crushing letdown. This is inevitable. Do something sustainable. /10

The entire thing is here. I think the Parkland students and their parents would be well-served to quietly and earnestly consider all of that advice -- even if some will inevitably decide to ignore its sentiments, doubling down on knee-jerk partisanship and preening double standards instead.  That's their right.  And it's our right to respond.  Let's just use our heads and keep our humanity intact in the process.