No, the Trump Administration's Re-Insertion of a Citizenship Question into the US Census Isn't an Outrage 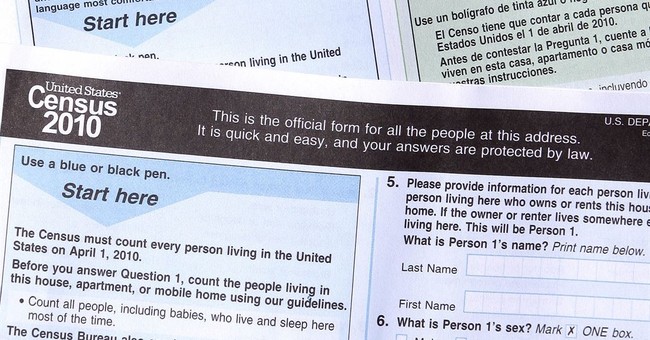 Congressional Democrats and left-wing activists like Eric Holder -- who became the first US Attorney General in history to be held in contempt of Congress -- are outraged over the Trump administration's decision to re-insert a citizenship question into the upcoming 2020 census.  Their arguments range from weak to hysterical.  My hunch is that most Americans would be surprised to learn that this is even a remotely controversial issue.  "Are you a US citizen?" seems like a natural question that would arise in the process of an official nationwide head count, so much so that many people might expect to see it listed on the form just after the slots for full name and date of birth.  Yet here we are, debating whether the government of the United States of America should be allowed to explicitly tally its own citizens.  A few relevant points:

(1) Prior to 2010, which represents the historical anomaly on this question, citizenship questions had appeared on US censuses dating back to the early 1800's.  According to Ben Weingarten of the London Center for Policy Research, the citizenship inquiry appeared on the long-form version of the questionnaire from 1970 to 2000, when approximately one-in-six households were mailed this more detailed document.  Up until 1950, it was "consistently asked" on the standard survey.  There is ample historical precedent for this question and the administration's decision to reinstate it; the last census was the outlier (incidentally, though it was conducted during the Obama years, the 2010 census questions were finalized during the last year of the Bush presidency).  It's worth noting that the federal government also inquires about citizenship status on a host of official documents and census-style questionnaires, including the annual American Community Survey (ACS).

(2) Some critics, including the Attorney General of California, have suggested that the revived inclusion of this previously-unremarkable question may 'intimidate' both legal and illegal immigrants, resulting in systemic underreporting.  Sen. Dianne Feinstein assailed the move as an "assault on the foundations of this country."  This is wild hyperbole, even if one chooses to disregard the historical context laid out in the above item.  Crucially, the citizenship question is silent on legal status. The government is not asking people to disclose whether they are in the country legally or illegally.  It is simply asking people to denote whether or not they are citizens.  Those who check the 'no' box would fall into the broad category of non-citizens living inside the United States, attesting or admitting nothing about any potential immigration law infractions.  As for the stated concern that widespread, anxiety-rooted non-reporting could result in an inaccurate count, that doesn't follow either.  The Commerce Department says there is no evidence that the presence of a citizenship question results in significant non-participation; indeed, the aforementioned ACS (which always includes the citizenship question) has regularly attracted a response rate approaching or exceeding 97 percent:

Re: US census firestorm, the federal 'American Community Survey' (annual questionnaire from Census Bureau that asks the "controversial" citizenship Q) has a robust response rate. In 12 out of last 17 yrs, it has exceeded 96%. Fears of vast non-participation seem overblown: pic.twitter.com/VRxKTAWLND

And to repeat: Citizenship questions appeared on versions of the census for nearly two centuries, under presidents of both parties.  Furthermore, gathering information on the number of US citizens via the census does not mean than non-citizens would not be counted, as some have implied.  They certainly would.  The government would just have more detailed information about the percentage of all US residents who have citizenship. This is not sinister or inappropriate data for the government of a sovereign nation to seek or obtain.

(3) The Trump administration's reasoning behind this move argues that having access to a thorough, comprehensive and reliable headcount that accurately reflects the US citizenry is vital to enforcing a section of the Voting Rights Act.  Weingarten explains:

The DOJ says it wants to reinstate this question to get an accurate count of the citizen voting-age population within localities in order to enforce Section 2 of the Voting Rights Act that exists to protect citizens against discrimination, such as vote-dilution based on gerrymandering. The DOJ adds that federal appeals courts have repeatedly held that in vote-dilution cases hinging on citizenship rates, citizen voting-age population is the proper metric for determining the legality of district maps.

You may believe that Trump and company have ulterior political motives here.  I don't think that's an implausible charge, though we shouldn't pretend that Democrats objecting to this don't have their own partisan and fiscal interests in mind, as well.  Nevertheless, this prima facie legal argument seems eminently reasonable and non-frivolous.

(4) Finally, a number of liberals are pointing to a 2016 SCOTUS ruling that -- unlike vote dilution cases under the VRA -- Congressional apportionment should be based off of total population, not citizen voting-age population.  I happen to believe that representation should be determined by the number of US citizens in a particular jurisdiction.  The government's primary interest should be to serve its citizens; indeed, only citizens are permitted to vote under the law.  Using total population as the measuring stick on this front can have the perverse effect of illegitimately over-empowering cities or areas that encourage illegal immigration through sanctuary policies.  But let's say you disagree with me on this point.  Fine, let's put that question off to the side.  I still don't see a compelling reason why the federal government should not use its once-a-decade official exercise in counting every single person in the country -- which includes tabulating data across categories like sex, race, age, and housing status -- to tally the total number of its own citizens.  It is legitimate, useful data.  I'll leave you with some quotes from a New York Times story about illegal immigrants opting out of government, due to fear:

Ms. Queveda, the mother of a 14-year-old American boy, is not about to step out of her house to participate in a census that inquires whether she herself is a citizen. “I would never answer, because I don’t have papers,” the 46-year-old native of Guatemala said as she set out for a walk in the Hollywood Hills on Tuesday morning, a husky and German shepherd in tow. “Obviously, I am afraid. I have a son.”...“I know that no parent in my neighborhood is going to be opening the door for anyone doing a survey,” said Mr. Morio, 32, a stucco plasterer helping to erect a multimillion-dollar home in Los Angeles. He is single and does not have children...Once an undocumented immigrant, Gladis Perez benefited from a 1986 amnesty program to legalize her status. The native of Guatemala became a citizen five years ago. “I wouldn’t answer any questions before,” she said as she made her way to work on Tuesday. “I wouldn’t even open the door. If I were still undocumented, I would avoid this survey at any cost.”

These responses suggest that some illegal immigrants were already heavily inclined to avoid any official interaction with government demographers. The piece also makes me wonder if the "immigrant advocates" and political figures who are lodging frantic complaints about the re-insertion of a simple question into the US census are actually doing more to stoke fears and potentially suppress participation among certain communities than the federal government's planned administrative action ever would have on its own.  Then again, some ideologues and outrage-mongers never miss an opportunity to whip up misplaced anger over something as seemingly mundane as census questions.