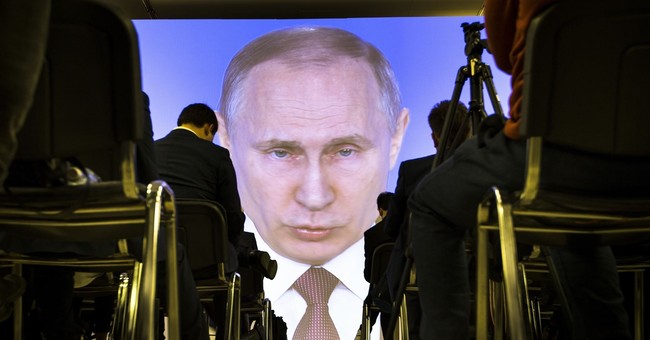 One of the hot talking points on the Left in the hours after Rex Tillerson's firing as Secretary of State was that he finally sealed his fate by crossing President Trump on Russia.  Tillerson had squarely placed blame for this headline-grabbing assassination on British soil where it belonged -- on the Kremlin -- and that statement of fact must have rankled his Putin-admiring boss to the point of canning him.  Or so the story went.  Of course, some of the same people who were arguing that Tillerson's departure was evidence of Russian influence had insisted a year ago that Tillerson's arrival was...evidence of Russian influence.  When all you have is a hammer, everything looks like a nail.  In reality, 'Rexit' had been in the works for months.  It was extremely classless of Trump to fire his top diplomat over Twitter, but the underlying mismatch in priorities and personalities was well known within Washington.  The timing and method of firing was a shock; the parting of ways was not.

As for the Trump administration's rhetorical response to the London poisoning, I think Allahpundit is right to ask, what more do Trump critics want?  Here's Nikki Haley absolutely blasting Moscow on the subject at the United Nations this week:

"Let me make one thing clear from the very beginning: The United States stands in absolute solidarity with Great Britain. The United States believes that Russia is responsible for the attack on two people in the United Kingdon using a military-grade nerve agent. Dozens of civilians and first responders were also exposed."

This is yet more moral clarity from a woman whose representation of the United States at Turtle Bay has been defined by unapologetic, morally clear truth-telling. Her assignment of blame echoes the British government's conclusion, which comes on the heels of a stunning near-admission from the Russians themselves:

JUST IN: Prime Minister Theresa May announces that the UK will expel 23 Russian diplomats "who have been identified as undeclared intelligence officers" after nerve agent attack on Russian former spy https://t.co/gqdE3G5ihu pic.twitter.com/iv3c0IAK6G

He was actually a British spy, working for MI6 pic.twitter.com/PPAcE8a9vz

The way the narrative was developing, this fact pattern evidenced a revealing rift: The president was on one side, whereas No. 10 Downing Street, and Trump's own UN ambassador, were on the other.  But here's the official White House statement about the attack.  Do you see much daylight here?

NEW: White House issues statement in support of the UK: "The US shares the UK's assessment that Russia is responsible for the reckless nerve agent attack on a British citizen and his daughter, and we support the UK's decision to expel Russian diplomats as a just response.” pic.twitter.com/H29owJQJZl

The US and UK are standing together against Putin's Russia on this one.  In addition, the Trump administration slapped new sanctions on Russians on Thursday, in response to election meddling and cyber espionage efforts -- via the New York Times:

The Trump administration on Thursday imposed sanctions on a series of Russian organizations and individuals in retaliation for interference in the 2016 presidential elections and other “malicious cyberattacks.” It was the most significant action taken against Moscow since President Trump took office. The sanctions came at the same time the United States joined with Britain, France and Germany in a statement denouncing Russia for its apparent role in a nerve-gas attack on a former Russian spy and his daughter on British soil, calling it a “clear violation” of international law. But the statement did not say anything about any action in response. In his first personal comment on the poison attack, Mr. Trump agreed that, despite its denials, Russia was likely behind it. “It looks like it,” he told reporters in the Oval Office. “I spoke with the prime minister and we are in deep discussions. A very sad situation. It certainly looks like the Russians were behind it. Something that should never ever happen. We’re taking it very seriously, as are I think many others.”

These should be greeted as positive developments by anyone who sees Russia as a top geo-political adversary (Mitt Romney, call your office) and who has worried that the Trump administration would adopt accommodating stances against the Kremlin.  I'll leave you with this RNC research document pushing back extensively -- and to some extent, rather persuasively -- against the narrative that this White House has been weak on Russia, especially compared to the previous administration.