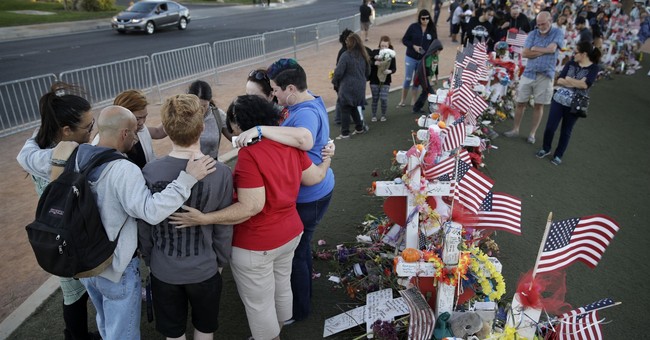 One of the most popular forms of virtue signaling on Post-Tragedy Twitter is to excoriate people -- especially politicians -- who offer "thoughts and prayers" for victims.  The idea, as most charitably understood, is to challenge public officials to take concrete actions to prevent massacres and attacks, as opposed to offering sympathy after the fact.  In practice, it often looks and feels like venomous attacks on faith and reflexive demonization of designated partisan villains.  And this knee-jerk counter-ritual has become predictable that it's emerged as the Left's own equivalent of "thoughts and prayers."

Side A offers thoughts and prayers (off-puttingly meaningless gestures, according to Side B), while Side B blasts thoughts and prayers (off-puttingly hostile and mean-spirited to Side A).  And 'round and 'round we go.  Indeed, the mere mention of expressing sympathetic thoughts and offering prayers in response to negative developments has become enraging anathema to such a wide swath of hardcore liberals that actor Chris Pratt even found himself under attack recently for sending well-wishes and prayer requests over a fellow celebrity's heart attack.  Yes, it's insane and ugly and dispiriting. Given the intensity of this hostility, imagine how the following report was received among lefty activists, especially considering the internal fights already playing out involving the DCCC and the direction of the Democratic Party.  And keep in mind that this leaked in the midst of the Parkland aftermath, with tensions and anger riding high, which suggests a deliberate effort to embarrass the DCCC:

The morning after the Oct. 1 mass shooting in Las Vegas, a member of the Democratic Congressional Campaign Committee’s press staff warned House candidates and their staffs not to “politicize” the shooting that day. Politicization, according to the DCCC official, included talking about gun violence prevention policy. “You and your candidate will be understandably outraged and upset, as will your community. However, DO NOT POLITICIZE IT TODAY,” DCCC regional press secretary Evan Lukaske wrote to candidates in the Northeast. “There will be time for politics and policy discussion, but any message today should be on offering thoughts/prayers for victims and their families, and thanking 1st responders who saved lives.”

This may strike most people as good advice and a nod to common decency, but it struck the far left as a craven affront to The Cause.  A left-wing group is already blasting out an email to its list, savaging the DCCC and raising money off of the 'outrage:'

The center-Left is likely to unite in November over a shared hatred of President Trump and a desire to flip Congress, but there is some serious friction in their political coalition.  Another manifestation of that reality is the series of emerging fissures over a newly-introduced gun ban co-sponsored by more than 150 House liberals.  As others have pointed out, the legislation goes far beyond even previous "assault weapons" bans (the reinstitution of which was heavily defeated in 2013, with the help of many Democrats); it would pertain to many millions of guns -- including handguns, restrictions on which are particularly constitutionally suspect and unpopular.  Arguments against the bill are strong and convincing.  Committed activists and the lefty base are likely to rally around this effort, but other Democrats are getting pretty antsy over it:

It comes as other Democrats warn that embracing aggressive new gun restrictions carries risks, particularly in conservative-leaning districts where gun rights are sacrosanct. “It’s one of those fundamental issues that riles up American politics — it’s up there with abortion and immigration — and they need to be very careful,” said a former Democratic leadership aide. “If a Democratic candidate, or the party as a whole, overextends on this issue, then it becomes incredibly easy for the Republicans to play that up in a lot of districts.  “It’s easier to demagogue on this than to do something about it,” the aide added, “and you risk overreaching as a party if you try to make it a one-size-fits-all [issue].” ...the Democrats’ campaign arm is shying away from the notion that the party will adopt any national message on gun reform, citing regional and cultural differences across the country. And a second leadership aide suggested Democrats won’t go too far with their proposals, since major reforms are unlikely under a GOP-controlled Congress. “If we’re in the majority, of course the legislation changes,” the second aide said.

Note well that the aides quoted cautioning against overreach are doing so on tactical and political grounds, not policy or constitutional grounds. "If we're in the majority, of course the legislation changes," one says, tipping his hand.  I'm someone who supports some compromises (here are two no-brainers, in my view), but I understand why gun rights supporters aren't interested in surrendering much, if any, ground to a movement that: Speaks approvingly of a confiscatory regime, applauds (and introduces) very broad semi-automatic bans, whispers that candidates should talk carefully on the trail then act more aggressively after winning, and amplifies voices calling anyone who disagrees accomplices to murder who don't care about dead kids.  I'll leave you with this data set, which does not make massacres like Parkland or Sandy Hook any less atrocious and heartbreaking.  Nevertheless, context, perspective and facts should be paramount in our discourse about societal problems and potential solutions:

Schools are safer than they were in the 90s, and school shootings are not more common than they used to be, researchers say https://t.co/eMaY4uV30L