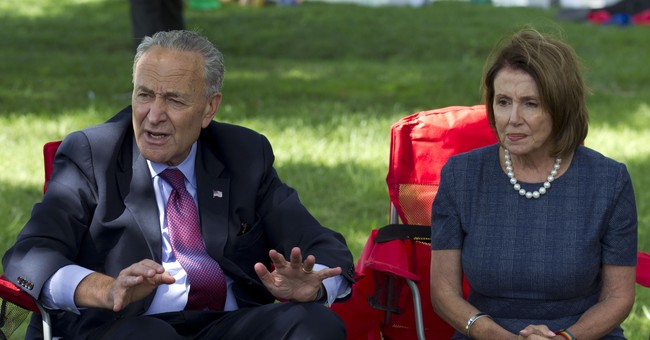 A great deal of ink has been spilled over the years about the Republican Party's trend to the right and the various fissures -- both tactical and substantive -- within the conservative coalition.  What tends to attract less coverage is the Democratic Party's crack-up and significant lurches toward the far left.  Those tensions are playing out in real time across the country.  Take the DCCC, the arm of the party tasked with re-electing House Democratic incumbents and unseating Republicans.  They're under fire for a pair of decisions, including dropping an oppo bomb on a left-wing candidate vying for the party's nomination in a Texas district.  Chuck Todd covered the story on his MSNBC show:

This meddling infuriated progressive grassroots activists, who already distrust the party apparatus and who are understandably accusing the establishment of again seeking to tip the scales.  But in Illinois, the DCCC has snubbed a sitting member running for re-election, and that decision has nothing to do with ethical lapses or scandal -- via Politico:

Dan Lipinski is the kind of candidate Democrats need more of for the party to win the House in November. But the national Democratic Party is refusing to endorse him. The seven-term congressman from Chicago, who opposes abortion and voted against Obamacare, marriage equality and immigration reform, is one of the most conservative members of the House Democratic Caucus. The question of whether the Democratic Congressional Campaign Committee will officially back Lipinski for reelection — he faces a stiff primary challenge from the left — has triggered an outbreak of ill will and finger-pointing from each wing of the party toward the other. With less than a month until the March 20 primary, tensions that have been brewing privately for weeks between the caucus’ centrist and progressive lawmakers are now spilling out into a messy public spat...“I don’t think what the DCCC does or says means a lot for my race as much as sending a signal to other Democrats who are looking to run,” Lipinski said in an interview.

Democrats have to know that they’re going to have the full support [of the DCCC] even if they’re not straight in the party line,” he added. “And we need candidates who are not straight along the party line to win the districts we need for the majority.”...DCCC’s actions, [some have] argued, could have a chilling effect on current members and potential candidates who don't line up with the progressive purity test liberals are pushing. “If someone is a big donor to the DCCC or is a big voice like Schakowsky, if members go astray, are they going to have to watch their back?” said a senior Democratic House staffer.  “I think it’s shocking that the DCCC or Chairman Luján can’t say that they support Congressman Lipinski. Supporting incumbents should be No. 1 there.”

Lipinksi has voted with his party 87 percent of the time over his career, but is more socially traditional than most Congressional Democrats these days. Crossing the powerful and well-funded abortion lobby is major risk, and appears to be his most unforgiveable transgression. The Weekly Standard's John McCormack looks at the dwindling ranks of pro-life Democrats, whom he dubs an "endangered species:"

Despite the efforts of congressional Democratic leaders to send the message in 2017 that there’s room in the party for pro-lifers, some progressives hope to send the opposite message in 2018. In Illinois’s March 20 primary, activists are trying to purge incumbent congressman Dan Lipinski, one of the rare pro-life Democrats remaining in Congress. “There are only three left,” Kristen Day of Democrats for Life says of the pro-life Democratic caucus in the House, whose membership is comprised of Lipinski, Collin Peterson of Minnesota, and Henry Cuellar of Texas. “The push for party purity on this issue is not going to help build a majority.” Lipinski says his opponents want to create a “Tea Party of the left” and tells The Weekly Standard: “It’s ironic that we’re arguably in the worst position we’ve been in in terms of the number of elected officials across the country since Herbert Hoover. And there are those who want to narrow the tent.” “When it comes to issues such as abortion, there is bias against people who are pro-life,” he says. “I can understand NARAL going in because that’s what they do,” says Kristen Day, but many of “the people attacking Dan Lipinski are not supposed to be abortion-only organizations.”

McCormack notes how radical the party has become on the abortion issue, recalling that, "when the partial-birth abortion ban passed the Senate 64-34 in 2003, it did so with the support of 17 Democrats, including supporters of Roe v. Wade like Pat Leahy, Joe Biden, and Tom Daschle. It passed the House with 218 Republican and 63 Democratic votes." Contrast that with the outcome of last month's vote to bring America's abortion laws closer to the rest of the world by adopting a (widely supported) measure to bar elective abortions in the sixth month of pregnancy or beyond:

Polling shows that roughly HALF of *Democrats* support a mainstream ban on elective abortions in months 6-9 of pregnancy.

There are 242 Democrats in Congress. Six of them voted for this consensus reform. Six.

The radical abortion lobby has deep pockets & lots of power.

But while abortion is one of the most glaring examples of this stampede to the Left, it's hardly the only evidence of a broader phenomenon.  Consider the case of longtime liberal-in-good-standing, and a staunch supporter of legalized abortion-on-demand, Sen. Dianne Feinstein.  Because she's a bit too much of a throwback politician -- a harborer of bipartisan instincts and occasional teller of heterodox truths -- for the modern hard Left in California.  And she knows it, leading to contortions like this.  So the "progressive" wing of her party dealt a striking setback to her re-election bid over the weekend.  I'll leave you with yet another California leftist railing against the 'corruption' of "dollars and donors" in the political process:

Yes, that would be billionaire and Democratic mega-donor Tom Steyer, famous buyer of influence and access, funder of countless campaigns, and partisan vanity project bankroller extraordinaire.  He's reportedly spent over $180 million on political causes since 2014 alone.  The Republicans made him do it, or something.  But of course.