Oh Yes: Guess Who's Getting Ready to Hit the Campaign Trail for Democrats This Year? 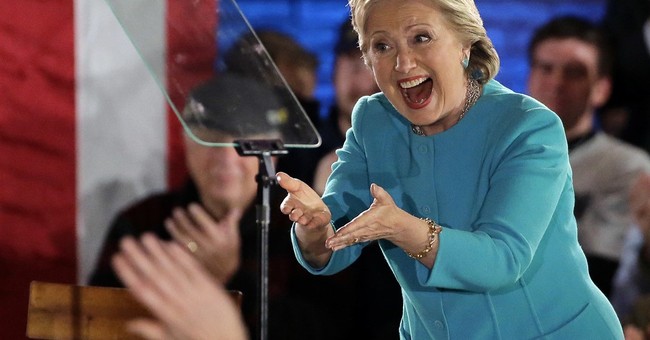 Look, I'm not saying that she couldn't potentially be useful to certain candidates in carefully-targeted districts (might she finally venture to such exotic locales as Wisconsin?), but I cannot imagine that the (surging) Republican Party is the least bit opposed to Hillary Clinton re-entering the political spotlight ahead of a challenging midterm election cycle.  As I've written before, if she weren't doing so on her own accord, the GOP may have been forced to devise some way to actually pay her to get out there and "help."  Well, Democrats, help is on the way:

Her emerging 2018 strategy, according to more than a dozen friends and advisers familiar with her plans, is to leverage the star power she retains in some Democratic circles on behalf of select candidates while remaining sufficiently below the radar to avoid becoming a useful target for Republicans seeking to rile up their base...Most likely, they said, Clinton will attempt to help Democratic candidates who have a history of supporting her and her family...“She’s not going to be up front,” said Jaime Harrison, a former chairman of the South Carolina Democratic Party and an associate chairman of the Democratic National Committee...Clinton’s team also understands that, although she remains popular with many Democrats, she could be a hindrance to candidates running in Trump country.

She'll stay "below the radar," more than a dozen of her associates have, um, told the Washington Post.  Good luck with that. Republicans from coast to coast will be eager to ostentatiously highlight any and all efforts Mrs. Clinton undertakes on behalf of her party, ever mindful of Clinton's historically unique unpopularity following an electoral loss:

More than a year after the 2016 presidential election, former Democratic nominee Hillary Clinton's favorability rating has dropped to a new low, according to a Gallup poll released Tuesday. The poll showed 36% of respondents rated Clinton favorably compared to 61% who rated her unfavorably, which is a new high for that measure...Almost a full year into Trump's presidency, Gallup found his favorability rating was higher than his former Democratic opponent, with 41% of respondents in a December poll rating Trump favorably compared to his 56% seeing him unfavorably.

Here is Gallup's analysis of December survey's findings: "Since losing to Trump, Clinton's favorable ratings have not improved, in contrast to what has happened for other recent losing presidential candidates. In fact, her image has gotten worse in recent months."  It's almost impressive.  It seems unlikely that she'll make a beeline for West Virginia to help her (increasingly desperate) fellow Democrat Joe Manchin -- or venture to Missouri to support Claire McCaskill, the first member of Congress to endorse her 2016 presidential campaign.  But hey, Republicans can dream.  In places where Hillary's a liability, perhaps Democrats will deploy Deputy DNC Chairman Keith Ellison to barnstorm across the country instead.  Ellison, who recently appeared to endorse the violent 'Antifa' mob, has struggled to distance himself from wild radicalism in his not-so-distant  past. And then this story broke.  Surprise:

Rep. Keith Ellison (D., Minn.), deputy chairman of the Democratic National Committee, attended a private event with Nation of Islam leader Louis Farrakhan and Iranian President Hassan Rouhani in 2013, according to a newly resurfaced report. Anti-bigotry organizations have long pegged Farrakhan as both racist and anti-Semitic, citing his praise of Adolf Hitler, his obsession with Jews, and his belief that white people are subhumans created by an ancient African scientist.

Farrakhan is a David Duke-level hateful nut, and Rouhani leads a tyrannical, terrorist regime that routinely engages in eliminationist rhetoric (and military provocations) against the world's lone Jewish state.  But as we've recently been reminded, some rank bigotry is acceptable in left-wing politics, even if some operatives and sympathetic journalists are savvy enough to help keep it under wraps.