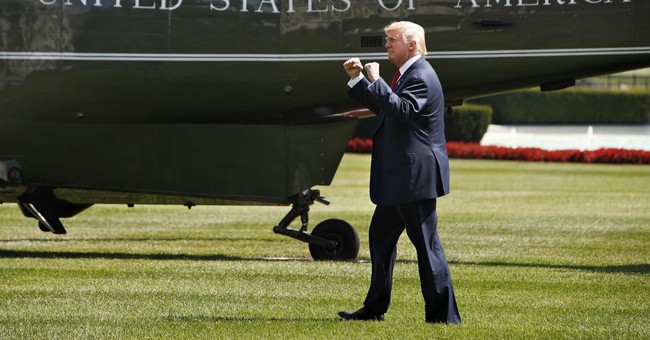 As I've been writing, the fact that Schumer put wall funding on the table in the first place means that it's not going away.  That bell cannot be un-rung.  The Senator from New York may have made a big show of withdrawing his offer, but that's just pandering to a wounded and angry base in the wake of his terrible shutdown miscalculation and retreat.  Paying for Trump's border wall is now a Schumer-legitimized baseline GOP demand, and Senate Democrats are apparently whispering to journalists that everyone knows it:

Senate Democrats acknowledge that any bipartisan immigration reform will need to include funding for a border wall. [MSNBC reporter Garrett] Haake reported from Capitol Hill that despite Senate Minority Leader Chuck Schumer (D., N.Y.) saying he has taken wall funding "off the table," Senate Democrats acknowledge a different story. He said Democrats realize the "simple reality" that if they want to pass a legislative fix for recipients of the Deferred Action for Childhood Arrivals (DACA) program, the legislation will have to include tough border security measures. "So Chuck Schumer doesn’t want to leave his offer sitting on the table and weaken his negotiating position any further," Haake said. "The bottom line is though that there's going to have to be some kind of money for border security–some kind of money for a wall–to get this deal done...Democrats in the Senate acknowledge it, and it's the simple reality..."

"Some kind of money" isn't going to cut it.  For reasons we elaborated upon earlier in the week, the border security measures, including a physical barrier, must be spelled out with specificity -- and the related funds must be appropriated, not just authorized.  Meanwhile, Democrats appear to have entirely abandoned their foolish and doomed linkage between government funding and the DACA issue:

Senate Democrats are willing to drop their demand that relief for Dreamers be tied to any long-term budget agreement — a potential boost for spending talks, but one that could face opposition from their House counterparts. The shift comes in response to the deal struck between Senate leaders Monday to reopen the government and begin debate on an immigration bill next month. Meanwhile, budget negotiators are expressing optimism that a two-year agreement to lift stiff caps on defense and domestic spending is increasingly within reach. “We’re viewing [immigration and spending] on separate terms because they are on separate paths,” Senate Minority Whip Dick Durbin (D-Ill.) said Tuesday...But House Democrats have signaled they are not ready to go along with a long-term budget deal without a fix to the Deferred Action for Childhood Arrivals program that President Donald Trump is ending.

Durbin's quote is a recitation of the same state of play that existed before his party's quixotic shutdown misadventure, again underscoring how utterly fruitless that stunt was. And House Democrats' tough talk should be viewed as something of an irrelevant bluff. The minority party has very little power in the lower chamber, so their threats only matter if the GOP can't muster the votes to pass a funding bill on their own. And the idea that House Dems would actually follow through and sink legislation to keep the government open that's been blessed by their Senate counterparts strikes me as pretty far-fetched. Earlier, I referred to the Schumer Shutdown as a miscalculation.  A leading House Democrat who has his eyes on Nancy Pelosi's job agrees:

Their incoherent "strategy" was to blame Republicans for the shutdown they forced with their filibuster, and simultaneously winning points with the left wing for "fighting" on behalf of the DREAMers.  It didn't work.  I'll leave you with this biting take from The Onion: