By the Way, Black Unemployment Just Hit the Lowest Level Ever Recorded 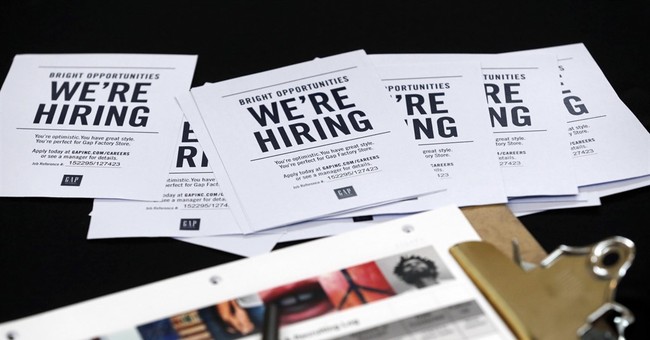 The final official jobs report of 2017 was released today, and it mostly contained positive news.  CNN's article about its findings mentions both the progress made in December, and also across the entire calendar year.  Most of the crucial data trends have been pointing in the right direction, and the cumulative job growth is nothing to sneeze at either -- not to mention modest wage growth:

The job market may be the only thing hotter than the stock market. The U.S. economy added 2 million jobs in 2017, another solid year of gains. In December, the economy added 148,000 jobs, according to Labor Department figures released Friday. That was below what economists expected, but still the 87th straight month of gains -- the longest streak on record. Unemployment remained at 4.1%, matching the lowest level in 17 years.  Wages grew 2.5% compared with a year ago. Wages still aren't growing as quickly as the Federal Reserve would like, one reason so many Americans still feel left out of the recovery from the Great Recession...The United States added almost 3 million jobs in 2014, 2.7 million in 2015 and 2.2 million in 2016. That trend is what's expected in such a long economic expansion. As unemployment moves to historic lows, job gains eventually slow down. Still, industries across the economy added jobs last year. Manufacturing, an industry that President Trump has sought to boost, added almost 200,000 jobs last year, a turnaround from 2016, when it lost jobs. Construction added 210,000 jobs in 2017. Bars and restaurants hired about 250,000 waiters, cooks and hostesses. Health care continued to lead the pack, adding 300,000 jobs in 2017.

"These are good numbers:"

And then there's this nugget, which goes to a point of emphasis from the president's rhetoric dating back years:

At 6.8 percent, black unemployment reached the lowest rate on record in December pic.twitter.com/W3JluWp2tf

"Lowest rate on record," as in ever.  Yes, it is tendentious and silly for presidents to take outsized credit, or to receive outsized blame, for the national economy.  The black unemployment rate hasn't cratered to its best level of all time "because of Trump."  That analysis requires adopting simplistic view of causality, and there are important nuances and context involved in interpreting economic data.  But the business-positive regulatory and tax environments are certainly helping, and the new tax law will allow countless American businesses to put more money in their workers' pockets, hire new employees, and invest in their operations.  Plus, 80 percent of all taxpayers will be keeping more of what they earn next year thanks to the new tax cuts -- which is an effective pay raise.  Politically, the good news for Republicans is that the economy is in very good shape, with economic confidence soaring.  The bad news is that Trump's job approval rating remains weak, as does the GOP's position on the generic ballot, though not as weak as before:

Worth keeping an eye on: Since the tax cut passed into law we have seen an uptick in Trump's approval rating and a decline in the Dem generic ballot lead. Generic ballot suggesting Dems will win 40 House seats, down from 46 seats several weeks ago. pic.twitter.com/5JV8N5f68B

I'll leave you with a needed caveat: It's insane to predict what's going to happen ten months from now, given the overwhelming speed of the news cycle.  And it's also a mistake to predict Trump's fortunes based on traditional metrics.  That said, a strong economy is clearly preferable to a sputtering or deteriorating one.