Year One Report Card: Voters' Most Common 'Grades' for Trump Presidency Are... 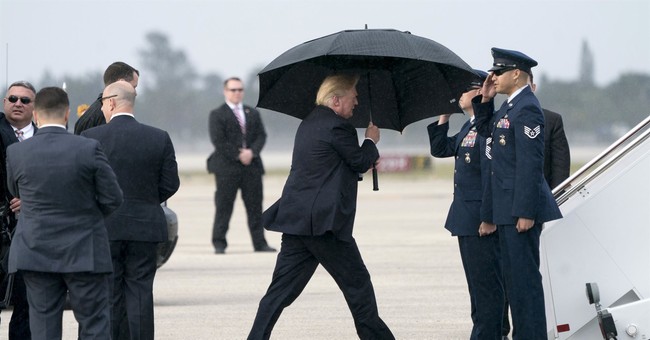 Politico's pollster asked voters to assign President Trump a "report card"-style grade for his first year in office, and the results reflect the nation's deep partisan polarization.  The most common verdicts were 'F' (35 percent, including a supermajority of Democrats) and 'A' (18 percent, including a plurality of Republicans).  The line to keep an eye on is independents, whom Trump narrowly won (46/42) in 2016, and whose dissatisfaction with President Obama helped fuel two midterm GOP waves.  Here is the breakdown, followed by some thoughts and additional notes:

POLITICO poll, year one "report card" for Trump. 35% of voters give him an A or B, 46% give him a D or F. Heavy partisan polarization: pic.twitter.com/vxSNB925Zy

A few things stand out to me about this infographic: (1) Democrats are much more united in their intense opposition to Trump than Republicans are in support. Nearly two-thirds of them give him an 'F,' with roughly 80 percent slapping him with a 'D' or worse. (2) Among Republicans, 72 percent grade him with an 'A' or 'B,' but the 'A' number doesn't come close to mirroring the large 'F' judgment from Democrats.  Indeed, more self-identified GOP voters (44 percent) say Trump has earned a 'B' or 'C' than an 'A' (43 percent).  Mixed feelings about this president abound within his own party, although these trends are worth noting: "Since mid-April, Republican voters have become 10 points more likely (from 33% to 43%) to award Trump an "A" grade. Democrats (from 48% to 64 %) and independents (from 21% to 31%), meanwhile, have grown more likely to say Trump is failing."

(3) Independents, per usual, are the bellwether -- and in this case, their assessments track with the overall nationwide averages.  By double digits, they're more inclined to give the president poor marks than strong ones, but their grades aren't nearly as bipolar as the partisans'.  A big question that will weigh heavily on Republican candidates across the country this fall is how the approximately one-in-five independents who've given Trump a 'C' are feeling about their choices in the midterms.  Issue by issue, the picture is more complex.  Trump is underwater (A/B vs D/F) on seven of ten categories polled, but his bright spots are significant ones:

Trump's strongest year one 'grades' come on jobs & the economy, where A/B marks outstrip D/F marks. Fighting terrorism is also a relative strong point (~even). He's underwater on all other issues: pic.twitter.com/Dulx99Jz8r

He's (+7) on the economy, (+7) on jobs, and dead even on fighting terrorism. Trump may not be getting the credit that his administration would prefer to attract on strong economic indicators (which we addressed here), but people are drawing a distinction between his positive policy attributes and their generally negative feelings about him.  And even though the decimation of ISIS' terror army is an shockingly underplayed story, people intuitively understand that this president's harder-line approach to combatting terrorism is a plus.  For what it's worth, as a campaign-era 'Never Trump' conservative who has remained skeptical of him, I'd assign him a high-'B' on policy (better than I'd expected, admittedly, thanks to some really serious accomplishments, lasting ideological advances, and improved defenses of the national interest), and a 'D' on comportment and conduct.  I view him as a toxic figure who is nonetheless advancing a number of important goals.  I suppose that calculus places me among the 14 percent of voters who've given him a 'C.'

Finally, because the Russia matter has been a cloud that's hung over Trump's presidency thus far, I'll renew my call for Americans to insist on all of the facts being examined.  As such, the Fusion GPS angle to this saga is significant and potentially quite damning for the Russia obsessives.  Read this piece by Mollie Hemingway about some developments that have gone largely unnoticed in the mainstream press: