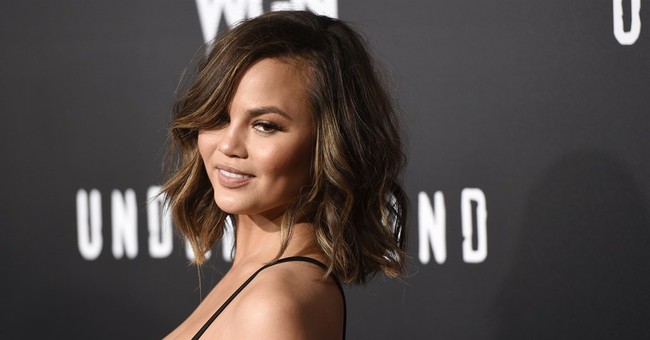 Model and internet celebrity Chrissy Teigen, who is married to singer John Legend, is well known for her outspoken beliefs -- many of which are hostile to the president and his party.  Regardless of her politics, she's got a fun sense of humor and charming self-awareness that has won her young fans from across the ideological spectrum.  In response to the sexual abuse scandal that has rocked US gymnastics, Teigen made a very generous offer on Twitter today, which we'll get to in a moment.  First, some background, in case you haven't been following it carefully: Another prominent Olympic gymnast has come forward to confirm that a former team doctor -- a monster accused of molesting more than 100 girls over the years -- also violated her.  The doctor, Larry Nassar, has pleaded guilty to sexually abusing seven girls, and his victims are being offered the opportunity to make impact statements prior to his sentencing.  It has now come to light that one of those young women reportedly faces a six-figure fine if she steps forward to tell her story before the court, due to the terms of a nondisclosure agreement (NDA) attached to a financial settlement she reached:

The settlement paid out to Gold-medal winning gymnast McKayla Maroney after she filed a lawsuit against USA Gymnastics means that she might not be able to speak at the sentencing of Larry Nassar this week. Maroney, who was a member Fierce Five squad that took home Gold at the 2012 London Games, revealed in a lawsuit filed last month that she received $1.25 million from the organization in December 2016. The two-time world-champion vaulter, 22, agreed to sign a non-disclosure agreement as part of the deal, which imposes a $100,000 fine should she ever speak about Nassar or the abuse she suffered at the heads of the disgraced doctor.

Maloney says Nassar sexually assaulted her when she was 13 years old.  Many people reacted to the NDA news with revulsion, believing the terms of the 'hush money' to be unjust, and wondering aloud if such arrangements help protect predators, perhaps allowing them to seek out additional targets. Among the righteously outraged is Ms. Teigen, who decided to very publicly put her money where her mouth is:

The entire principle of this should be fought - an NDA to stay quiet about this serial monster with over 140 accusers, but I would be absolutely honored to pay this fine for you, McKayla. pic.twitter.com/lsBEgEqZpD

This gesture garnered instant and deserved applause across social media; I joined in, despite some reservations about people cheering the violation of voluntarily and mutually agreed-upon private contracts.  Secret dollars being shelled out to cover up the serial sexual abuse of children, however, strikes me as an uniquely egregious circumstance under which the moral and ethical dynamics favor transparency and justice.  In addition to aggregating some of those plaudits, Twitchy also rounded up some of the reactions blasting USA Gymnastics' handling of this entire horrifying ordeal:

Nassar isn't the only one who should go to jail in this mess. The way USA Gymnastics treated its young athletes was criminal. https://t.co/tnRzdTP2Dk

Ed Morrissey has more on this, including an analysis of why the likelihood of an NDA-related fine being enforced is very slim in this case.  It would seem that battle isn't over.  Victim statements given thus far have been searing and extremely disturbing.    A stomach-turning snippet from one young woman:

"Sexual abuse is so much more than a disturbing physical act. It changes the trajectory of a victim's life and that is something that no one has the right to do," one of Larry Nassar's victims tells court https://t.co/kuNqrRlYMc pic.twitter.com/cJRRIdALwZ

Prosecutors are seeking a prison sentence of 40 to 125 years for the disgraced doctor.