Major New Study on Free Speech and 'PC' Culture: The Good, the Bad, and the Ugly 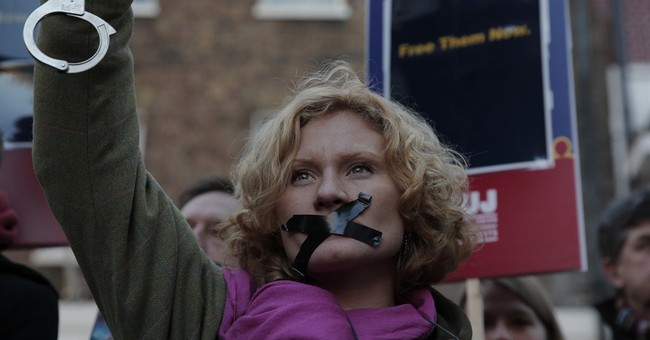 A newly-released national survey commissioned by the libertarian-leaning CATO Institute is brimming with fascinating, heartening, and occasionally dispiriting data on how Americans view the First Amendment and free speech issues in general.  Overall, the data confirms that liberals are significantly more hostile to the open exchange of ideas than other groups; self-identified liberals tilt heavily toward banning or punishing speech they find to be offensive or "hateful," although conservatives have some pro-authoritarian blind spots, too.  The numbers reveal that in many cases, large majorities agree with critiques of political correctness often advanced by conservatives.   Here are some of the most encouraging, and most disheartening, findings from the scientific poll of more than 2,500 US adults.  Let's start with the good news:

(1) Americans see political correctness as harmful to public discourse: Nearly six-in-ten (58 percent) say that the current climate prevents them from speaking up about their beliefs, including large majorities of moderates and conservatives.  Only "strong liberals" feel comfortable expressing their views, which is a telling statistic. More than seven-in-ten (71 percent) believe 'PC' culture has primarily "silenced important discussions society needs to have," as opposed to having "helped avoid offending others." Liberals are the only group to side with the latter option, as moderates break 78 percent for the former.  Most Americans have also caught on to the End of Discussion racket, with a clear majority agreeing that terms like "sexism" and "racism" are abused to stifle and short-circuit debate.  Leftists would be wise to heed this warning on the 'boy who cried wolf' effect:

(2) A substantial majority of Americans oppose (unconstitutional) laws that would ban "hate speech," even while overwhelmingly condemning hate speech as morally wrong.  There are alarming cross tabs on this question -- including a majority of racial minorities who say defending the right to engage in racist speech is just as bad as actual racism (!) -- but this is the correct balance to strike:

Also note that when pressed further, a whopping 82 percent of Americans agree that barring "hate speech" would be quite difficult in practice because people can't reach a consensus on what constitutes offensive or hateful speech. Fact check: Very, very true.

(3) Campus crackdowns on speech and ideological indoctrination at institutions of higher learning are seen as real, systemic problems.  Approximately two-thirds of respondents say colleges should discipline students who shut down invited speakers (ranging from warnings to suspensions to arrests), and the same number believe universities "aren’t doing enough to teach young Americans today about the value of free speech." Americans get this one right, too:

Democrats are much more likely than Republicans to favor banning speakers who hold a wide array of controversial views from addressing campus audiences.  A vast majority of respondents support non-disruptive forms of challenging or protesting views or speech that college students may find offensive.

(4) As we've seen in other data, the American people broadly oppose employers punishing employees over their political or social views, a hot topic in recent times: "Majorities of Americans don’t want to fire people from their jobs because of their political beliefs. But, the public is most likely to support firing an executive who believes that African Americans are genetically inferior (46%). About a quarter to a third support firing business executives who believe that all white people are racist (35%), believe transgender people have a mental disorder (30%), believe men are better at math than women (26%), believe psychological differences help explain why there are more male than female engineers (25%), or believe homosexuality is a sin (22%)."  CATO's summary goes on: "We find that the more strongly a respondent identifies as liberal the more supportive they are of firing people for each of these beliefs."

As for the ongoing battle over whether small businesses run by religiously orthodox and traditional people should be required to serve same-sex weddings (an issue that comes before SCOTUS next term), Americans strongly oppose this form of coercion.  While a slim majority says businesses shouldn't be permitted to generally deny service to LGBT clientele even if homosexuality violates the proprietors' religious beliefs (I'd prefer to see a much higher number on this point), that sentiment falls off a cliff when applied specifically to wedding ceremonies and events. In other words, the "peaceful coexistence" accommodation between gay rights and religious liberty we recommend in our book is mainstream and appealing to most people:

A majority of respondents say government officials should be required to do their jobs when it comes to performing civil marriage ceremonies or issuing marriage licenses to same-sex couples.  By an overwhelming landslide (81 percent), Americans "oppose requiring churches and religious organizations perform same-sex wedding ceremonies if doing so violates their religious beliefs."

(5) Despite the hard Left's relentless efforts to enforce cultural hyper-sensitivity, most people simply aren't particularly bothered by "safe space"-puncturing "micro-aggressions." When leftists declare certain innocent or anodyne phrases to be "problematic," most Americans of all races just roll their eyes:

Of course, for those of us who advocate 'small-L' liberal views on free speech and open expression, there are plenty of alarming and demoralizing red flags embedded within CATO's survey, too.  A handful of them:

(1) The heckler's veto works. A 58 percent majority of Americans say colleges should cancel events if a violent backlash is threatened, led by 74 percent of Democrats who hold this view.

(2) Nearly one-in-three respondents believe physical violence is an acceptable response to "hate speech," including 51 percent of strong liberals who say it's justifiable to "punch a Nazi." A bare majority say hate speech is a form of violence unto itself -- and 52 percent of Democrats support government intervention to stop it.

(3) Setting aside compelling arguments about the Golden Rule and treating people with kindness, "51% of Democrats support a law that requires Americans use transgender people’s preferred gender pronouns."

(4) Polarization and the "silo" effect is deepening, perhaps driven by liberals.  Intolerant "tolerance:" "Nearly two-thirds (61%) of Hillary Clinton’s voters agree that it’s “hard” to be friends with Donald Trump’s voters. However, only 34% of Trump’s voters feel the same way about Clinton’s."

(5) Although liberals and Democrats are consistently and disproportionately the most likely demographics to approve of heavy-handed coercion and censorship (racial minorities also hold some strikingly hostile views toward many First Amendment freedoms), it must be noted that conservatives and Republicans don't have clean hands either.  Tribalism runs deep, and can justify all sorts of illiberal impulses.  An incomplete roster of authoritarianism among the right-leaning respondents: 63 percent agree that journalists are "enemies of the people," 47 percent favor halting construction of new mosques, 53 support stripping US citizenship from flag-burners, and 65 percent say NFL anthem kneelers should be fired.

I'll leave you with this. Yikes:

Ready for this one? pic.twitter.com/mBm4BRAhbP