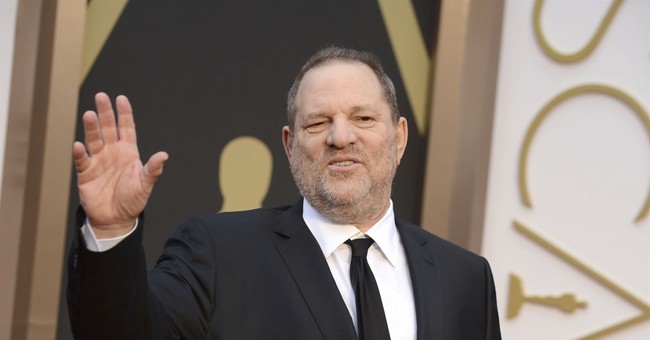 Why did Ronan Farrow, an investigative journalist for NBC News (an entity we defended earlier), break his giant scoop on Harvey Weinstein's alleged sexual assaults in The New Yorker, rather than on the network that employs him?  That was a question on many people's minds after the shock of the story itself began to settle in, as CNN's Jake Tapper was one of the first to publicly flag the disconnect.  Within a day or two, the ugly answer has begun to take shape: NBC very much appears to have bent over backward to suppress the story, impede its progress, and ensure that it never reached the air.  Brian Stelter, also at CNN, reported that the axe had come down from on high:

NBC contributor Ronan Farrow pursued leads about Harvey Weinstein's misconduct for months, but NBC passed on the chance to publish his story. "Ronan was basically told to stop working on this," according to a source, who called the network's decision "indefensible." Other sources with knowledge of the talks said NBC encouraged Farrow to take his investigation to a print outlet. What happened at NBC is a media world mystery. Did the network's executives not have the stomach for the inevitable legal threats? Were they trying to protect relationships in Hollywood? Did they simply believe that the complicated story was better suited to a long-form or print format? Or were there other reasons? The sources who spoke with CNN on condition of anonymity said they don't know exactly why.  But there is frustration and embarrassment inside NBC News about missing out on the story.

To her credit, MSNBC's Rachel Maddow pressed Farrow about the strange dynamic, giving him the opportunity on an NBC-owned network to very heavily imply that the bosses had obstructed the story. He's being as diplomatic as he can be in this answer, but reading between the lines, he message isn't subtle:

Maddow: Why did you end up reporting this story for the New Yorker, and not for NBC News?

Farrow: Look, you would have to ask NBC and NBC executives about the details of that story. I'm not going to comment on any news organization's story that they did or didn't run.

Then came this Huffington Post piece, which quoted many sources inside NBC -- and the resulting picture is a really bad one for the network:

New: How Top NBC Executives Quashed The Bombshell Harvey Weinstein Story. By @lpolgreen and me https://t.co/9Gi3gdZYlN

In mid-August, Ronan Farrow, an NBC News contributor, had secured an interview with a woman who was willing to appear on camera, in silhouette, her identity concealed, and say Harvey Weinstein had raped her, according to four people with close knowledge of the reporting. It was a pivotal moment in a testy, months-long process of reporting a story that had bedeviled a generation of media and Hollywood reporters. Farrow had a lot of material already. In March, he had acquired a damning and much-coveted audio recording in which Weinstein admits to having groped an Italian model. He had interviews with former executives and assistants who’d worked closely with Weinstein who spoke about the culture of harassment and abuse he perpetrated. And now he had someone ready to accuse Weinstein of rape, on camera.

But at that moment Farrow was also caught in the pincers of an NBC News edict. He had been told by executives at NBC News that he didn’t have enough reporting to go on air with his Weinstein story, according to four sources, and he had been told by the network to stop reporting on it. NBC tried to put a stop to the interview with the woman accusing Weinstein of rape. The network insisted he not use an NBC News crew for the interview, and neither was he to mention his NBC News affiliation. And so that was how Ronan Farrow wound up paying out of his own pocket for a camera crew to film an interview. As a project for NBC News, Farrow’s story was effectively dead.

Reacting to the public and indignant explanations offered by NBC News' president (essentially that the story wasn't strong enough to reach the air), a dozen sources at the network pushed back hard:

Yet interviews with 12 people inside and outside NBC News with direct knowledge of the reporting behind Farrow’s story suggest a different cause of death. All of the sources who spoke to HuffPost asked not to be named, either because they weren’t authorized to speak to the media about the story or because they were fearful of retribution from NBC News executives. These sources detailed a months-long struggle within NBC News during which Oppenheim and other executives slow-walked Farrow’s story, crippling it with their qualms and irresolution. Toward the end, the concerns seemed to take on a personal tone, and it became difficult to tell where the Weinstein team’s attempts to discredit the story left off and NBC News’ editorial forbearance began.

Devastating. As more details -- including demands that Farrow 'postpone' interviews, and not use NBC equipment or crews for news-gathering and interviews -- come to light, journalists from the Washington Post and the New York Times have started taking the network to the woodshed:

Becoming more and more clear that what happened at NBC is straight-up journalistic malpractice https://t.co/3J6dFYwbFT

As Ingraham points out, reported elements in the HuffPo story indicate how Weinstein personalized his desperate and ruthless efforts to quash Farrow's reporting -- threatening lawsuits and pounding the table about supposed 'conflicts of interest'.  He did everything within his power to prevent his decades of slime from spilling into the open, and now we're supposed to believe that he's contrite in his apologies, and that he's legitimately "seeking help" via fancy Europe-based therapy?  Hey, maybe if he flees the country for good to avoid extradition (the NYPD has reportedly opened another investigation into him), Hollywood will give him an Oscar and a standing ovation in absentia.  Meanwhile, the drip, drip, drip continues -- including Twitter's stunning decision to suspend the account of a Weinstein accuser, and another blow to the already-preposterous notion that powerful people in Weinstein circles had no idea what was going on:

Weinstein Company Was Aware of Payoffs in 2015 https://t.co/oAngc0H1K2

And on another NBC-related note -- check out this garbage excuse from late night host Seth Meyers about why his show was silent on the Weinstein story over the first few days that it broke:

"I was not prepared to talk about something as tricky as sexual assault in a way that felt appropriate that quickly" https://t.co/ytr37sepjw

Two points: First, he was more than prepared to blast Donald Trump over the Access Hollywood tape, which Trump completely deserved.  But then again Trump was a Republican bogeyman by that point.  He was also neither Meyers' buddy nor a massively influential figure in Meyers' industry, unlike Weinstein.  Second, the first two joke-free nights of this scandal played out before the more serious allegations of rape and assault came to light.  It was "only" about harassment at the time.  Was Meyers also not ready to mock sexual harassment "that quickly"?  Or perhaps this just a load of ass-covering BS.  The comics and the celebrity set are now playing catch-up, which is safer than ever in light of Weinstein's irreparable implosion.  I'll leave you with Anthony Bourdain going there:

know what Hillary Clinton is NOT? She's not stupid. Or unsophisticated about the world. The Weinstein stories had been out there for years