Poll: Virginia Gubernatorial Race All Tied Up at 42 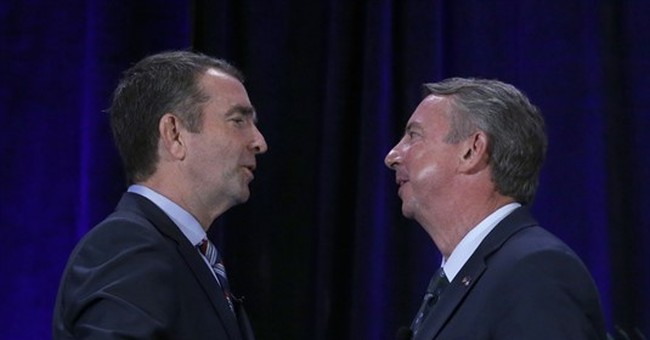 First, a quick lay of the land: West Virginia's Democratic Governor announced last month that he was ditching his affiliation ("Democrats walked away from me") and joining the GOP -- becoming the 34th Republican Governor in the nation, tying the previous high water mark.  Twenty-six states now feature unified Republican control of the executive and legislative branches, with just six blue state equivalents.  Meanwhile, Democrats' early track record on tapping into anti-Trump sentiment and parlaying 'resistance' fury into electoral gains has been decidedly mixed.  They've lost some big races, but they've also exploited localized energy and low turnout to flip some legislative seats that might have the NRCC sweating bullets.  Another 2018 preview will arrive this fall, when Virginia and New Jersey host statewide elections.  Democrats are almost certain to flip the Garden State governorship back into their column, with outgoing Republican Chris Christie's approval rating plumbing historic lows, and they're generally perceived to be in strong position to replace scandal-plagued and fact-challenged Gov. Terry McAuliffe with a fellow Democrat in Virginia.  But might the GOP have an opportunity to cancel out their likely loss in New Jersey with an upset in the Old Dominion?  Hmm:

New Suffolk poll of #VAGov has Gillespie and Northam tied at 42%. https://t.co/GvUkHtYY35

The poll's internals contain bright spots for each campaign.  President Trump's approval rating is underwater by nine points in Virginia (42/51), while Gov. McAuliffe's standing remains relatively stable (46/35).  On the other hand, Republican Ed Gillespie has higher name recognition than his Democratic opponent and is above water on favorability by eight points.  By a healthy margin, Virginians approve of the GOP-controlled state legislature (42/24).  On a hot-button cultural battle that the Left has picked, and on which McAuliffe has flip-flopped to the Left's side, Virginians reject the removal of confederate statues by 25 points.  All three major statewide races are tied at this stage in the race.  I've heard from sources close to the race that it's a challenging one for Gillespie, especially given the current political environment.  But GOP operative and campaign veteran Andrew Clark makes a good point about recent Virginia election cycles:

He's right about 2013 and 2014.  Ken Cuccinelli was considered a longshot in the 2013 gubernatorial contest, with McAuliffe leading comfortably by six points on election day.  It ended up being a 2.5 percent margin when the votes were counted.  In 2014, Gillespie was totally written off in a Senate race against popular incumbent Mark Warner, who led by ten points in the polls.  The final outcome?  Warner by less than one point.  By contrast, the polls were spot-on regarding Hillary Clinton's 2016 victory.  In this race, the RCP average gives Northan a 3.5 point edge at the moment. Meanwhile, after falling behind early, Democrats have stormed back in the money game and hope to swamp Gillespie with spending:

Virginia’s Democratic gubernatorial contender Ralph Northam raised more than twice as much money this summer as Republican opponent Ed Gillespie and had a war chest twice as large heading into the last two months of the campaign, according to finance reports. In July and August, Northam raised $7.2 million, while Gillespie took in $3.7 million in the same period. That left Northam, the sitting lieutenant governor, with $5.6 million in cash to Gillespie’s $2.6 million as of Aug. 31, according to data released Saturday by the nonprofit Virginia Public Access Project. Northam’s summer fundraising reverses a 2-to-1 cash advantage that Gillespie held immediately after the June 13 primary. Northam spent most of his early money on the primary contest to defeat former congressman Tom Perriello for the Democratic nomination while Gillespie had conserved funds in his primary match against Corey A. Stewart.

A Democratic sweep of the 2017 gubernatorial races would not be particularly surprising, as neither victory would be an upset.  But narratives matter politically -- for grassroots enthusiasm, for donors, etc -- and Democrats would love to chart a credible "comeback" course after November.  Can Republicans deliver a blow to those hopes in Virginia?  I'll leave you with Gillespie ads charging that the Democrat in the race is unworthy of a promotion:

The two nominees meet for a debate later this evening.