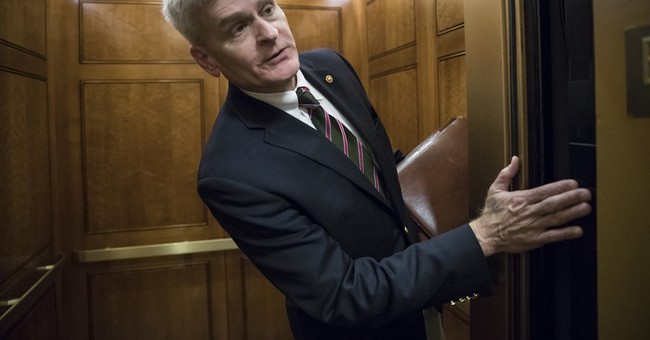 After barely registering on the media's radar for weeks, the Graham-Cassidy Obamacare replacement bill is finally generating serious attention as a September 30 deadline for action approaches.  As we noted earlier in the week, Senate Republicans appear to be just one or two votes shy of a simple majority to pass the legislation, which also appears to have enough support to clear the House of Representatives.  If the House Freedom Caucus can rally behind a bill that is several strides to the left of previous "repeal and replace" attempts, its passage seems likely.  But the key question, once again, is whether it can emerge from the Senate.  With a preliminary CBO score coming early next week, GOP leaders would have five business days to get a bill passed before reconciliation authority expires.  That analysis will examine the fiscal impact of the legislation, but not its affects on coverage or premiums, which will take several more weeks to compute.  The CBO's estimates on these fronts have been terribly flawed, but it still must be said that rushed votes on largely un-scored bills is awful process.  But here we are, again.  If you're looking for hopeful signs on the upper chamber whip count, it looks like John McCain -- while still hesitant -- says he's open to supporting the bill that's co-sponsored by his close friend, Lindsey Graham.  One of the factors behind McCain's decision-making process on Obamacare replacement bills has been the advice of his state's Governor, Doug Ducey, who gave the bill his blessing just yesterday:

Alaska's Lisa Murkowski has also made quasi-supportive statements that at least suggest that she'd consider casting an "aye" vote if and when the time comes:

Conversely, Susan Collins still sounds like she has no interest in supporting any bill to repeal Obamacare -- even one that takes a state-based approach similar to her own supposed plan, which she introduced with none other than Bill Cassidy.  It seems increasingly clear that as Republicans weigh their options on this subject, Collins should be considered a Democrat, for all intents and purposes.  Then there's Rand Paul, who is digging in against the bill, framing it as "if you like your Obamacare, you can keep it" non-repeal.  It's true that under Graham-Cassidy, states would have the ability to spend their healthcare funding block grants virtually however they see fit (though some core coverage protections and guarantees would remain mandated nationwide).  On the menu of possible options would be maintaining a framework that's effectively identical to Obamacare.  Some conservatives worry that liberal states might apply the funds to expand government even further, with an eye toward sprawling single-payer.  But part of the "risk" of federalism is that some states will make bad decisions; the upside is that other states will be more innovative and responsible, capitalizing new flexibility to improve the lives of their citizens.

Some of Paul's arguments against the new legislation hold water as a matter of policy, but they're hard to square with his support for "skinny repeal," which he said was the best option left.  And if he's offended by a proposal that would have the practical effect of maintaining Obamacare in some places, does he believe a better alternative would be to keep Obamacare...everywhere? Is the policy itself sound, or at least acceptable, from a conservative perspective?  A National Review summary explains some of the appealing benefits of the framework:

It would repeal the individual and employer mandates of the Affordable Care Act, impose per capita caps on Medicaid, increase contributions to health-savings accounts, allow states to waive regulations on private insurance providers, and provide those states with block grants so they can design their own health-care systems. If the bill became law, it would therefore be a genuine federalist triumph. A large portion of the federal money now set to fund the Medicaid expansion and subsidies of the Affordable Care Act would be instead distributed to individual states. Each state would have the freedom and means to develop its own health-care system. Reasonable people disagree over how best to design a health-care system, and under Graham-Cassidy, their ideas could be tested without causing a nationwide catastrophe and the disruption of a vital service.

A separate piece at NRO is a bit more skeptical, as is Avik Roy's analysis, which highlights the concern of state block grants leading to big government expansionism in some states.  Bill could "turbocharge single-payer activity" in certain areas, he warns, before outlining positive aspects of the legislation, as well as suggested improvements.  Meanwhile, another Forbes contributor is significantly more sanguine about the plan's effects on states; Reason's Peter Suderman, by contrast, believes Graham-Cassidy repeats the same mistakes of previous repeal efforts and should be defeated.  The discredited Left, of course, is back in hysteria mode, predictably blasting the centrist compromise bill as an imminent apocalypse -- and, you guessed it, the most "extreme" and harmful idea yet.  It's not.  And the hair-on-fire panic about draconian spending cuts is overblown:

To those screaming about spending cuts, Graham-Cassidy spends almost as much as Obamacare on coverage expansion: https://t.co/wqdZN0gxnz pic.twitter.com/TMz0vl96px

To listen to Democrats and many of the journalists who love them, you'd think it was the Republican proposal that's extreme. "In reality, Graham-Cassidy is the opposite of moderate," New York Times columnist Paul Krugman pronounced. "It contains, in exaggerated and almost caricature form, all the elements that made previous Republican proposals so cruel and destructive." The news section of the Times was more even-handed: "Medicare for All or State Control: Health Care Plans Go to Extremes." Are they really both "extreme"? Graham-Cassidy's chief goal is to pare back the federalization of health care policy by getting rid of the individual and employer insurance mandates and letting governors waive out of some regulations. More important, it block-grants Medicaid -- a long-sought dream for those wanting to get a handle on out-of-control spending and debt...That's what's so silly about the claim that Graham-Cassidy is as "extreme" as Sanders' radical and shoddily written proposal (the bill is totally silent on how to pay for any of it). Graham-Cassidy is very close to the kind of legislation we would have ended up with if Republicans had an idea of what they wanted from the get-go and the Democrats were interested in compromise. But we live in a time when extremism is defined as not getting everything you want.

We live in a time when a centrist, quasi-"repeal" with modest spending reductions is "extreme" and a ludicrous $32 trillion government takeover is "free."