Poll: Most Americans Blame Antifa or 'Both Sides' for Charlottesville Violence 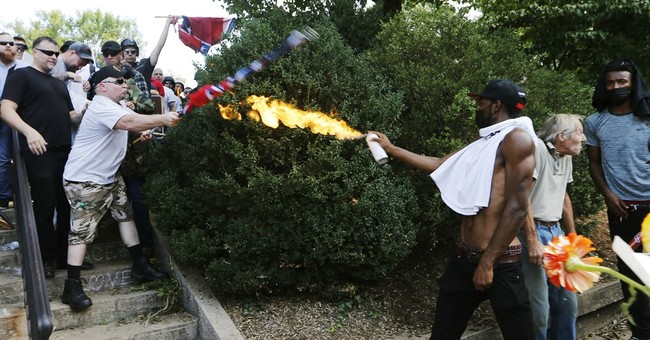 Despite the media declaring this sort of "moral equivalency" off limits, a near-majority of Americans surveyed about last weekend's events in Charlottesville blame the violent upheaval on "both sides" (40 percent) or on the Antifa Left (nine percent).  Slightly fewer (46 percent) point the finger at the Alt-Right as the primary culprits.  This result may stun members of the press who've spent days scolding anyone, including President Trump, who has raised the specter of left-wing violence in this context.  It seems the general public isn't nearly as horrified by Trump's framing as "opinion leaders" are -- via Axios:

Watching media coverage, you'd think Trump is nearly alone in believing "both sides" share fault for the Charlottesville violence. Turns out, most Republicans have his back...Far more blame "the far right groups" for Charlottesville (46%) than "the counter-protesters" (9%), but a remarkable 40% concur with Trump's assertion that both were equally responsible. "Beneath the surface, we see the same partisan division: Two-thirds of Democrats (66%) blame the far-right groups rather than the counter-protesters (6%), while Republicans overwhelmingly blame both sides equally (64%). About the same proportion of Republicans blame the far-right groups (18%) as the counter-protestors (17%)."

So basically, a plurality agree with Trump's characterization of the Charlottesville events, or are to his right.https://t.co/YlCzxnWwj6

I was quite critical of the president's initial response to the lethal unrest in Charlottesville (calling his follow-up statement welcome but woefully belated), then recoiled at his Tuesday assertion that there were some "fine" people at a white nationalist march.  What I did not do, however, was join the pile-on regarding his points about (a) the contribution of left-wing agitators to violence in Virginia and across the country, and (b) the potentially-problematic implications of tearing down Confederate statues and memorials.  On the former point, he's simply correct; pretending that only one "side" is responsible for political violence is outrageous and flat-out false.  On the latter point, he effectively asked, where does it end?  As if to prove his concerns valid, elements of the Left promptly aired demands that monuments to George Washington and Thomas Jefferson be purged from the public square. As ever, one of Trump's greatest political assets is liberal overreach:

CNN’s Angela Rye: Statues of Washington, Jefferson and Lee ‘All Need to Come Down’ https://t.co/Ee9jiwGJY9 pic.twitter.com/li6KxDDLOt

You can delete it, @VICE, but the internet never forgets. pic.twitter.com/eT3EiBC2SB

A Marist poll out this week found that a strong majority of Americans, including roughly half of Democrats, oppose ripping down Confederate statues.  As Rich Lowry wryly asks, how might eliminating tributes to America's beloved founders poll?  Before you go, read this Washington Post op/ed actually advocating violence against the Alt-Right, and this New York Times piece on the far-Left's growing embrace of physical violence.  It's as if they're committed to outdoing the president they loathe when it comes to alienating the country.