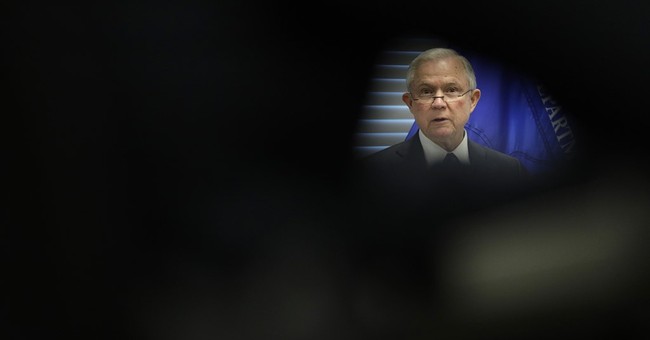 If confirmed -- more on that caveat shortly -- this fresh Washington Post scoop suggests that Attorney General Jeff Sessions misled Congress and the American people in more ways than one regarding his interactions with a top Russian diplomat during the 2016 presidential campaign.  Sessions initially denied any meetings with Russian officials, later retroactively altering his testimony to reflect press reports that highlighted a pair of meetings with Moscow's ambassador the Alabaman hadn't disclosed.  Here's how he described that discrepancy in his March statement announcing his recusal from the Russia investigation (of which President Trump still vehemently disapproves):

First, about the comments that I made to the committee that have been said to be incorrect and false, let me be clear. I never had meetings with Russian operatives or Russian intermediaries about the Trump campaign. And the idea that I was part of a quote, “continuing exchange of information” during the campaign between Trump surrogates and intermediaries for the Russian government is totally false.

So he did meet with the Russia Ambassador on two occasions (there's some controversy over whether there may have been a third), but they were not arranged under the auspices of the Trump campaign.  One was in his DC office, and was related to his work as a Senator who sits on committees relevant to foreign affairs; the other was at a reception organized by an outside group at the Republican National Convention in Cleveland.  Neither encounter was about the campaign, he said.  Enter WaPo's fresh reporting:

Russia’s ambassador to Washington told his superiors in Moscow that he discussed campaign-related matters, including policy issues important to Moscow, with Jeff Sessions during the 2016 presidential race, contrary to public assertions by the embattled attorney general, according to current and former U.S. officials. Ambassador Sergey Kislyak’s accounts of two conversations with Sessions — then a top foreign policy adviser to Republican candidate Donald Trump — were intercepted by U.S. spy agencies, which monitor the communications of senior Russian officials both in the United States and in Russia. Sessions initially failed to disclose his contacts with Kislyak and then said that the meetings were not about the Trump campaign.

One U.S. official said that Sessions — who testified that he has no recollection of an April encounter — has provided “misleading” statements that are “contradicted by other evidence.” A former official said that the intelligence indicates that Sessions and Kislyak had “substantive” discussions on matters including Trump’s positions on Russia-related issues and prospects for U.S.-Russia relations in a Trump administration. Sessions has said repeatedly that he never discussed campaign-related issues with Russian officials and that it was only in his capacity as a U.S. senator that he met with Kislyak.

Is this clear-cut proof of perjury, or at least dishonesty?  Maybe. Off the top of my head, I can think of possible defenses of Sessions: (1) Some Sessions defenders may claim that he only said the meetings were not explicitly set up as "about" the Trump campaign, which doesn't necessarily rule out the possibility that issues related to the campaign may have come up in conversation.  But that's Clintonian parsing, at best.  In another statement around that time, Sessions offered a broader denial, stating that he "never met with any Russian officials to discuss issues of the campaign."  Much less wiggle room there.  (2) Others may ask whether Kislyak was lying or exaggerating to his superiors -- or perhaps being purposefully misleading, knowing that American intelligence might be listening in.  The former notion is plausible, although that would mean he'd distorted the nature of his exchanges with Sessions on two separate occasions: "Current and former U.S. officials said [Sessions'] assertion is at odds with Kislyak’s accounts of conversations during two encounters over the course of the campaign, one in April ahead of Trump’s first major foreign policy speech and another in July on the sidelines of the Republican National Convention," the Post reports.  The latter theory makes no sense.  Setting aside Kislyak's subsequent public comments backing up Team Trump's contentions on the wider firestorm, there's no way Kislyak would have had the foresight to try to frame a future Attorney General, months before his eventual boss was even elected.

(3) The most innocent explanation here is a variant on the first item mentioned above, and involves divergent understandings of what would constitute "campaign-related" conversation topics.  Sessions, in pushing back against the larger "collusion" narrative, may have meant that his talks with the ambassador did not pertain to campaign strategy -- insights into the domestic political horserace, tactics against Trump's opponent, etc. After all, it's on that terrain where collusion would have taken place. Based on the Post's account of what these intercepts allegedly show, the two men talked about Trump's foreign policy stances regarding Russia, and how US-Russo relations might realign under a hypothetical Trump presidency.  It doesn't strike me as entirely unreasonable for Sessions to regard foreign policy conversations as separate from "campaign" conversations, just as it wouldn't be unreasonable for a Sessions critic to cite these newly-reported facts as evidence of mendacity.  It's difficult to reach a definitive conclusion on this point without seeing the full content and context of the intercepted communications in question.  For argument's sake, let's say you're willing to give Sessions the benefit of the doubt here.  At the very least, this potential contradiction -- which comes on top of a previous, related contradiction -- demonstrates why Sessions' recusal was not only appropriate, but necessary.

Considering how many people already questioned Sessions' impartiality as the top federal law enforcement officer overseeing the Russia probe months ago, imagine if this story had emerged with the Attorney General still running the show?  Calls for a recusal would have become deafening, very likely resulting in...exactly what ended up happening anyway: Sessions stepping aside, with his deputy appointing a Special Counsel.  Sessions is hardly out of the woods at this stage, as questions will continue to swirl about his veracity.  But even if he ends up with sufficient breathing room to side-step charges that he perjured himself or deliberately misled the American people, he'll still be battling a glaring credibility problem (there's that word again) on this issue.  If he hadn't recused himself, it would be clear as day by now that he'd have no business presiding over the Russia investigation.  Trump's position on the recusal is therefore even more untenable tonight than it was a few days ago.  Nevertheless, it is Trump's strongly-held and lasting position, which was relitigated in his New York Times interview this week.  In fact, Trump's ongoing exasperation on the subject, his extraordinary public criticisms of Sessions, and Sessions' decision to reject resignation speculation have combined to raise some questions about whether this particular leak may have been ordered by the president's inner circle, or Trump himself:

Every GOP figure I've spoken to at #AspenSecurity assumes Trump leaked this to force Sessions out. "Certainly not a Mueller leak," one said. https://t.co/5WjsCLkQks

Could this hit on Sessions really have Trump's fingerprints on it?  On one hand, Trump's anger evidently hasn't subsided with Sessions, whose recusal he blames for allowing the Special Counsel investigation to be launched (never mind that Sessions made that decision based on DOJ guidelines, and that the Mueller probe was green-lit by another Trump appointee).  Maybe after gratuitously dumping on him in the Times failed to chase Sessions off, Trump decided to fire a nuclear oppo missile at his Attorney General to force him out.  Petty and vindictive?  Check. On the other hand, I still find this idea extremely hard to swallow.  Sessions serves at the pleasure of the president.  If the president wanted him gone, he could just say so.  It's not like Donald Trump, of all people, is bashful about firing folks.  Plus, is Trump so blinded with rage at Sessions -- and by extension the Special Counsel investigation -- that he'd be willing to detonate a self-destructive bomb at the highest levels of his own administration?  In light of all the continued controversy over shifting accounts and battered credibility on Russia, kneecapping his Attorney General by fueling that exact same damaging storyline would be crazy -- right? I'll leave you with another possibility: The leak is just wrong.  It's not like that hasn't happened before over the course of this saga:

I don't doubt @washingtonpost @AshleyRParker was told what she was told, but keep this in mind: https://t.co/83AD5GXbAx