Sigh: Why Is Trump Attacking His Own Deputy Attorney General on Twitter? 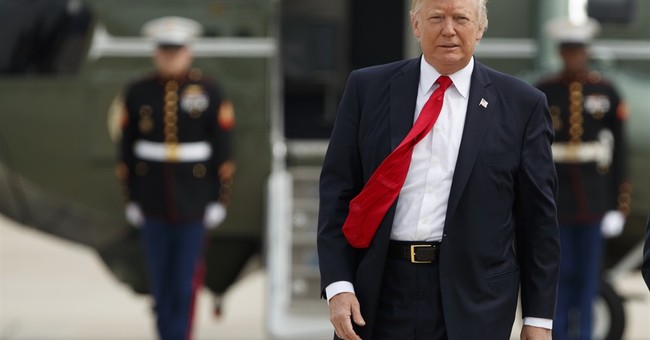 Well, first thing's first: Are we sure Trump's much-discussed tweet this morning is about Deputy Attorney General Rod Rosenstein?  There's some ambiguity around this message, but my belief is that its target is, in fact, Mr. Rosenstein, because the alternate obvious explanations make no sense at all.  Here's what the president wrote:

First of all, this appears to be independent confirmation from the president that he is being investigated -- presumably for obstruction of justice -- as reported by the Washington Post this week.  Many of Trump's supporters cried "fake news" over the story, but the development was unsurprising to anyone who watched James Comey's testimony last week; the fired FBI director telegraphed several times that this would be an inevitable component of the Special Counsel probe.  Trump was never a subject of the Russia probe, nor did he ever seek to impede it, but his potential interference on behalf of Michael Flynn on a tertiary matter likely attracted this tentacle of the investigation.

Second, the person to whom Trump seems at first glance to be referring in his tweet is Robert Mueller, who is the man doing the investigating.  (As an aside, it looks like CNN partially blew one element of its scoop about Mueller hiring Democratic donors).  But Mueller, operating in private practice when his friend Comey was dismissed, was definitely not the "the man who told [Trump] to fire the FBI director."  That was Rosenstein.  Still, the president's tweet is a bit puzzling because Rosenstein isn't acting as an investigator (even as he'd made final decisions about potential prosecutions); he merely made the call to toss it to a Special Counsel and chose the new leader of that probe.  In fact, he may need to recuse himself from the process because he could well be called as a witness.  ABC News reports:

The senior Justice Department official with ultimate authority over the special counsel's probe of Russia's alleged meddling in the 2016 election has privately acknowledged to colleagues that he may have to recuse himself from the matter, which he took charge of only after Attorney General Jeff Sessions' own recusal, sources tell ABC News. Those private remarks from Deputy Attorney General Rod Rosenstein are significant because they reflect the widening nature of the federal probe, which now includes a preliminary inquiry into whether President Donald Trump attempted to obstruct justice when he allegedly tried to curtail the probe and then fired James Comey as FBI director. Rosenstein, who authored an extensive and publicly-released memorandum recommending Comey's firing, raised the possibility of his recusal during a recent meeting with Associate Attorney General Rachel Brand, the Justice Department's new third-in-command, according to sources...Rosenstein is keenly aware that he could become a potential witness in the investigation. "I understand there are serious allegations that have been raised," Rosenstein told a Senate panel earlier this week. "I recognize the importance of these questions, and I think that Director Mueller ought to review that and make a determination of whether or not he believes it is within the scope of his investigation."

Plus, it's odd that Trump is again laying the decision to fire Comey at Rosenstein's feet. The DAG did issue an extensive memo recommending that course of action, focusing on Comey's botched handling of Hillary Clinton's email scheme, which angered both political parties.  But Trump bragged to Russian officials that he'd canned the FBI chief over Russia-related issues (my theory is that he was furious that Comey wouldn't state publicly that he'd privately assured Trump three times that he wasn't a target in the Russia probe), then told a nationally-televised audience that he'd already made up his mind to replace Comey before Rosenstein authored his memorandum:

In explaining that he'd have sacked Comey regardless of what Rosenstein suggested, Trump described his DAG as "highly respected," and a "very good guy, very smart guy."  Is that same man suddenly leading a "witch hunt" against the president?  Even if you want to answer that question in the affirmative, did Trump misjudge Rosenstein's character that badly?  By the way, Rosenstein released a statement yesterday urging Americans not to leap to conclusions based on things that they may read in the press:

What's clear: Rod Rosenstein does not like anonymous sources.

What's not: Why he's putting out this bizarre statement. pic.twitter.com/W5gRIGtgRS

Some ridiculed this as Trump boot-licking (Trump is now blasting Rosenstein today), but I saw it as an attempt by the administration to remind news consumers that just because an anonymous official tells the media something, that doesn't make it true.  James Comey reminded us of that as well, knocking down damning-looking exclusives from the New York Times and CNN during last week's hearing.  I also suspect that some in the White House and DOJ want to underscore that the existence of a preliminary inquiry into obstruction of justice does not mean Trump, or anyone else, is actually guilty of that offense.  As several liberal legal experts have stated, the case is extremely thin, based on current evidence.  Others have another theory behind Rosenstein's unusual press release:

Stay tuned.  I'll leave you with one White House source's assessment of the state of Mueller's work.