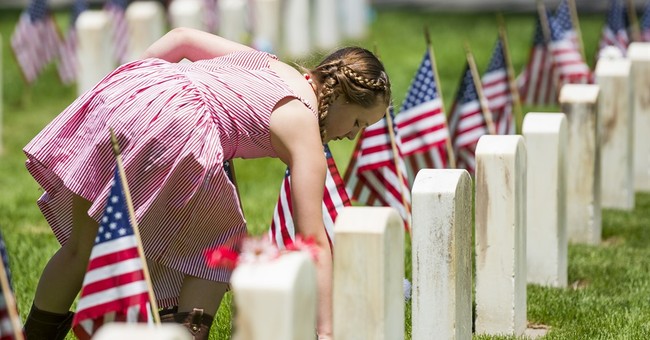 You can practically hear President Trump muttering, "keep it up" under his breath. Between the high-profile and profoundly illiberal excesses on college campuses, and the celebration of the freeing of a traitor (for whom taxpayers funded a sex-change operation), an element of the hard Left seems intent on alienating middle America. Ever eager to "help," two progressive websites published Memorial Day content that seemed...somewhat unlikely

to win friends or influence people among the non-converted. First, Vox offered this take on an elite branch of the US military:

The Marine Corps has a "toxic masculinity" problem https://t.co/fEXzlzKcsZ pic.twitter.com/aoWfggWG2z

As I said on Fox last evening, a vital element of the American tradition is that no institution is above scrutiny or criticism -- even the deservedly revered US Marine Corps. Sometimes, even they fall short, as illustrated by a string of court martial proceedings pertaining to an unacceptable nude photo scandal. But it's entirely understandable why many Americans would object to the timing of this piece, which criticizes an extraordinary fighting force for freedom on literally the one day of the year that we collectively set aside to honor the fallen -- including tens of thousands of United States Marines. That context, many have complained, renders the piece's publication gratuitous and disrespectful. Only about seven percent of living Americans have served in the military, including a tiny fraction who are currently on active duty.  So a very small sliver of our population is responsible for the heaviest lifting in safeguarding our liberties and way of life, and those who paid the ultimate sacrifice in that service have earned at least one day or solemn gratitude.  Vox might have considered respecting that.  The other great American Memorial Day tradition is cooking out with friends and family, welcoming in the summer. Mother Jones couldn't abide such fun, however, pulling out the lefty sad trombone with this scolding. Womp, womp:

America's BBQ grills create as much carbon as a big coal plant https://t.co/lD64JGGvSi


Leave us alone.  Who wants another bratwurst?  Speaking of joyless scolds and food, I know I linked to this story in passing earlier -- and we're straying a bit from the initial point of the post now -- but there's something about it that keeps bothering me. The purging that's all the rage in Portland, Oregon involves shaming or shutting down restaurants or food businesses that are run by people with the 'wrong' color skin:

Portland, Ore., has become the epicenter in a growing movement to call out white people who profit off the culinary ideas and dishes swiped from other cultures. In the days since two white women were shamed into shutting down their pop-up burrito cart after telling a reporter that they had “picked the brains of every tortilla lady” in Puerto Nuevo, Mexico, Portland has become all but fed up with cultural appropriation within its city limits. One writer has stated, flat out, that “Portland has an appropriation problem” ... Someone in the City of Roses has even created a Google doc, listing the white-owned restaurants that have appropriated cuisines outside their own culture. For each entry, the document suggests alternative restaurants owned by people of color. One “Appropriative Business” is Voodoo Doughnut, the small doughnut chain accused of profiting off a religion thought to combine African, Catholic and Native American traditions.

I cannot fathom how miserably race-obsessed one must be to take this up as a cause.  "Cultural appropriation," or blended cultures, is better known as...culture in America. This bizarre push toward segregation in the name political correctness is utterly bizarre. Before you go, I feel like I owe you some happier news. So feel free to take heart in this strong defense of free thought and expression by Fareed Zakaria at the Bucknell University commencement (at least one professor really needed to hear the message), as well as some laudable pushback against the targeting of a conservative professor at UCLA.
Supreme Court 'Looks the Other Way' While Allowing Biden to End 'Remain in Mexico'
Spencer Brown
Fact Check: Dismantling Ilhan Omar's Blizzard of Lies About SCOTUS, As She Pushes Court-Packing
Guy Benson